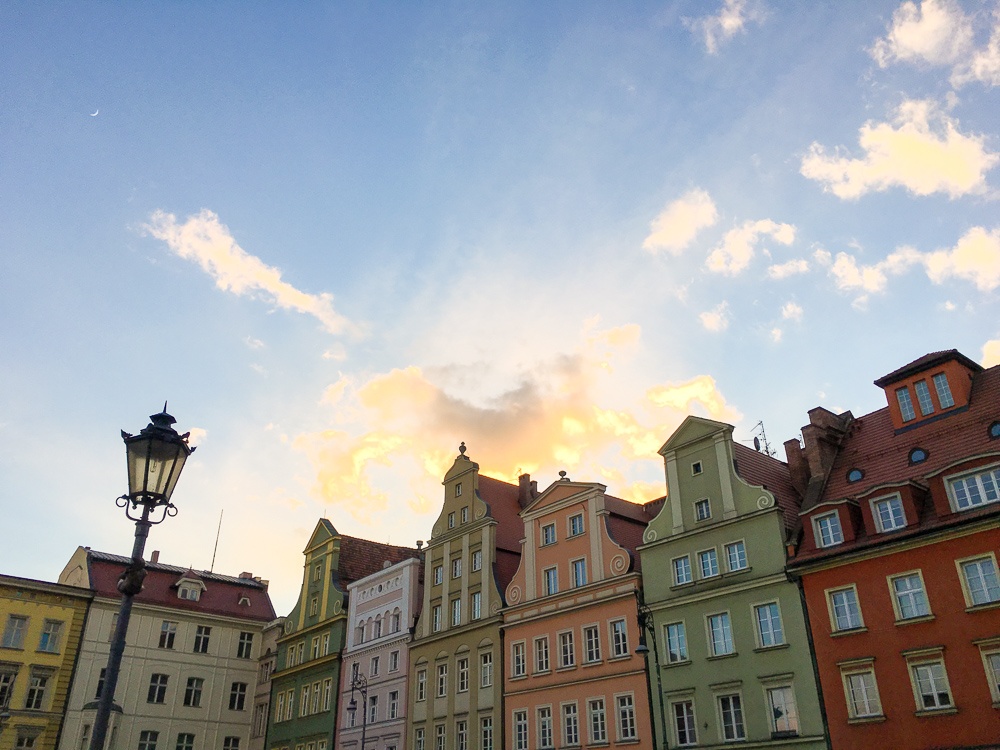 Last weekend we celebrated my handsome husband’s birthday with a weekend getaway. Thanks to Skyscanner I found amazingly cheap tickets (like €45 cheap) to Wroclaw – a gem of a little city in Southwestern Poland. Truth be told: I had to google it. And when I saw some pictures of the cutest town square ever I was sold. And also: Wroclaw is the European Capital of Culture in 2016, so what better time to hop on a plane and explore this place, right? Here’s why we fell instantly in love with Wroclaw and why you should go too. 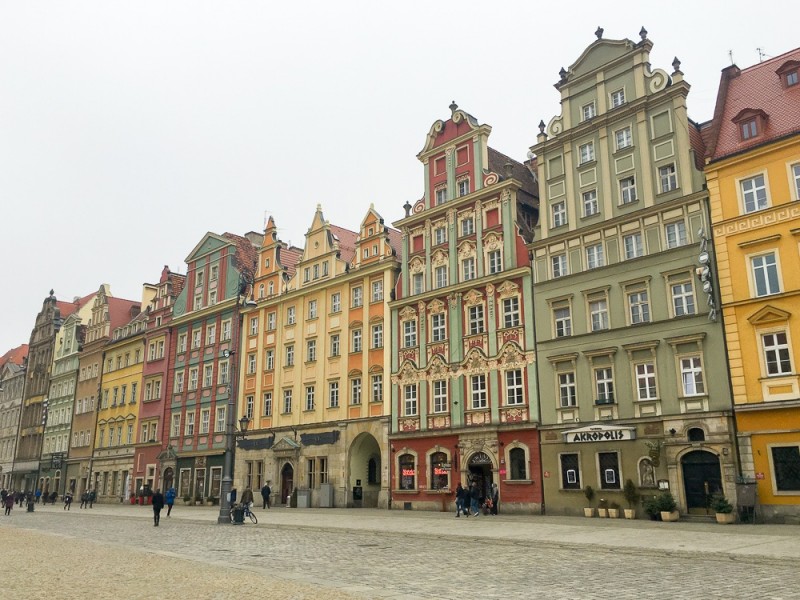 First things first: master how to pronounce Wroclaw. The correct spelling is actually Wrocław, and in Polish that funny looking “ł” is pronounced as a “w”. Uhm okay, but then how do you pronounce the actual “w”, you ask? Well, in Polish it is more like a “v”. And to make it even more challenging the “c” is like a “tz” sound. Still with me? Good, now you know that Wrocław is pronounced as Vrotzwav. Easy does it. Or not.

Even though there is more to love, the main thing that draws visitors to Wroclaw is the most adorable town square you’ll ever see. On my first trip to Poland (6 years ago) I stayed a week in Poznan and I remember how amazed I was by the wonderful historic buildings around the main square. And Wroclaw’s Rynek (square) was even more amazing. The colorful buildings around the market square look like they’re straight from a children’s book, so freaking cute. 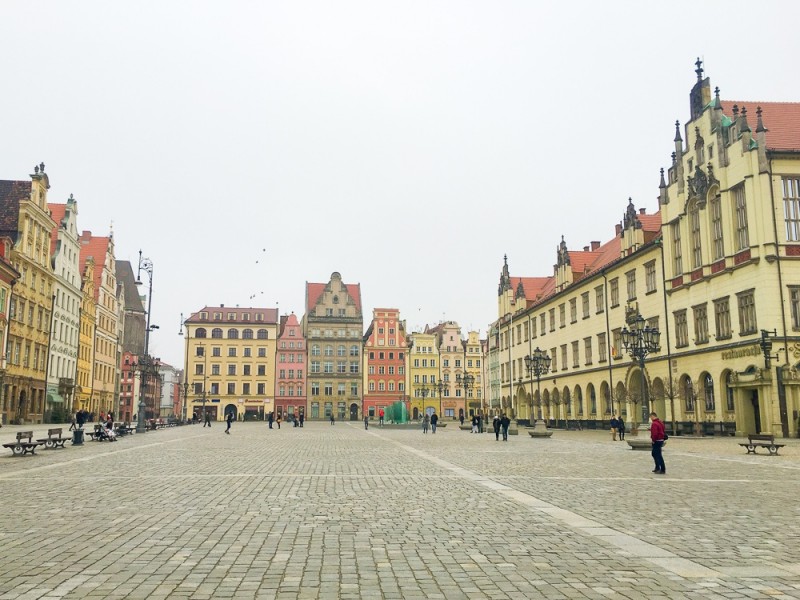 In the middle of the square you’ll see the city’s Ratusz (town hall) and apart from being a beautiful structure, the Ratusz also houses one of the oldest working restaurants in Europe – it has been operating since 1275! 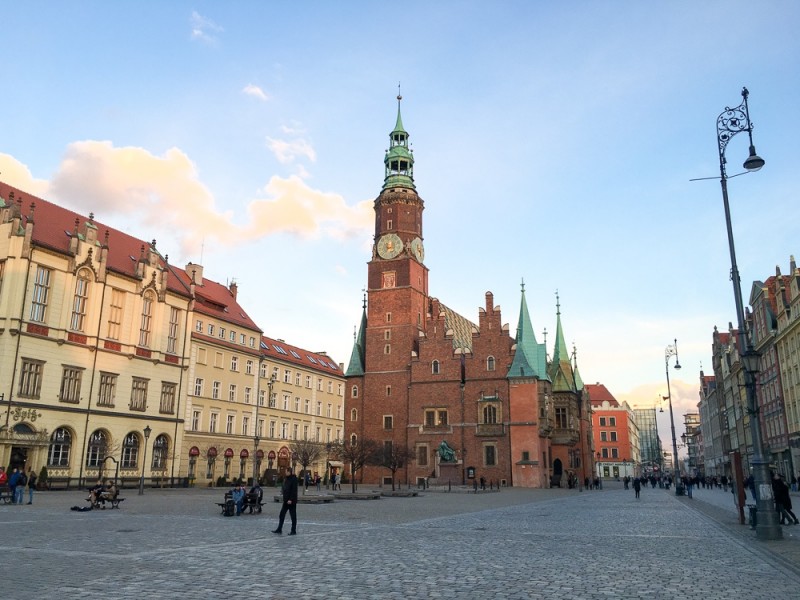 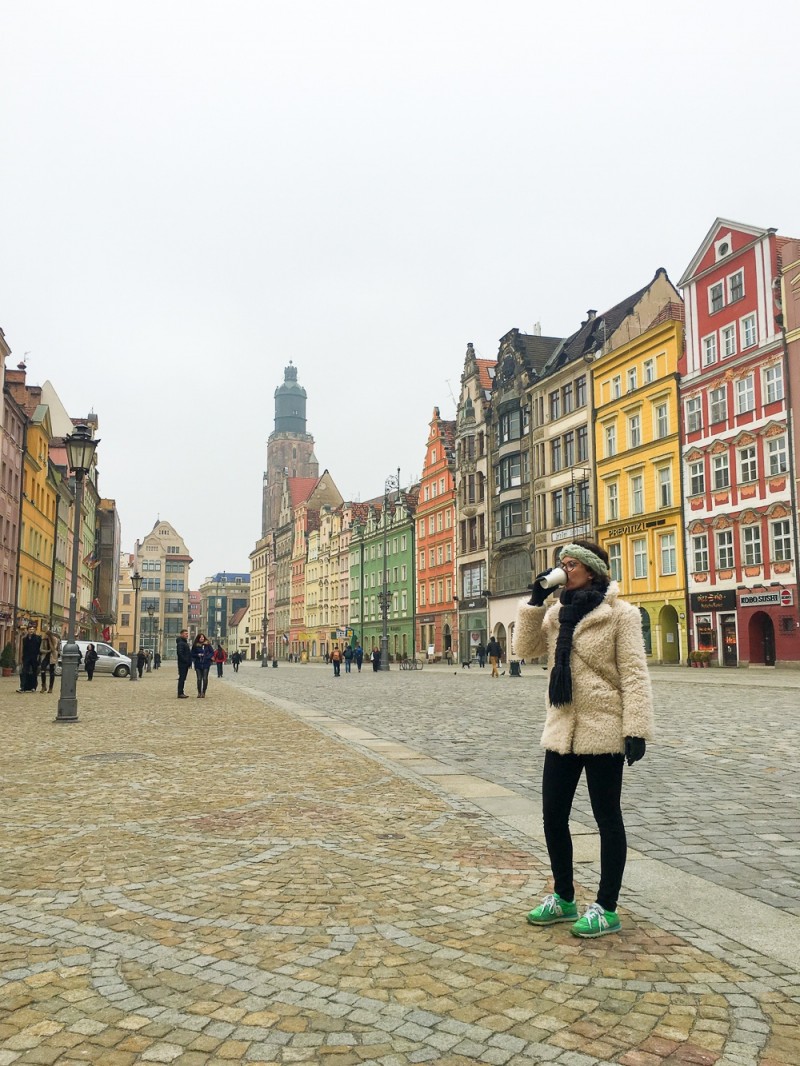 By now you probably already know that food is a big part of traveling for us. So when I learned that you could do a free food tour with a local guide across Wroclaw’s food scene I immediately signed us up. The guys from Free Walking Tour offer various cool walking tours that are all free (of course it’s nice to tip at the end) and give you an insight in life in Wroclaw. For the food tour you only pay for the food samples (6 in total) and it cost us 15 zloty per person which is something like €3,5. Awesome. Simon, our cool guide, took us to local favorites for Wroclaw’s best foods and I have to say it was pretty damn delicious. Highly recommended!

And also, make sure to get in line for the best beignet meets donut in Poland. Somewhere between the Rynek and the Wroclaw Opera on the street Swidnicka you’ll see a long line of people waiting outside a little bakery shop which is basically just a window. Since we were curious what was happening we got in line which was probably the best decision of the weekend. At Stara Pączkarnia they sell paczki fresh from the oven – and only one flavor at a time. So once we got to the window we were lucky to get the last banana flavored paczki before they switched over to jagoda (some sort of berries). And get this: 2,5 zloty (€0,45)! 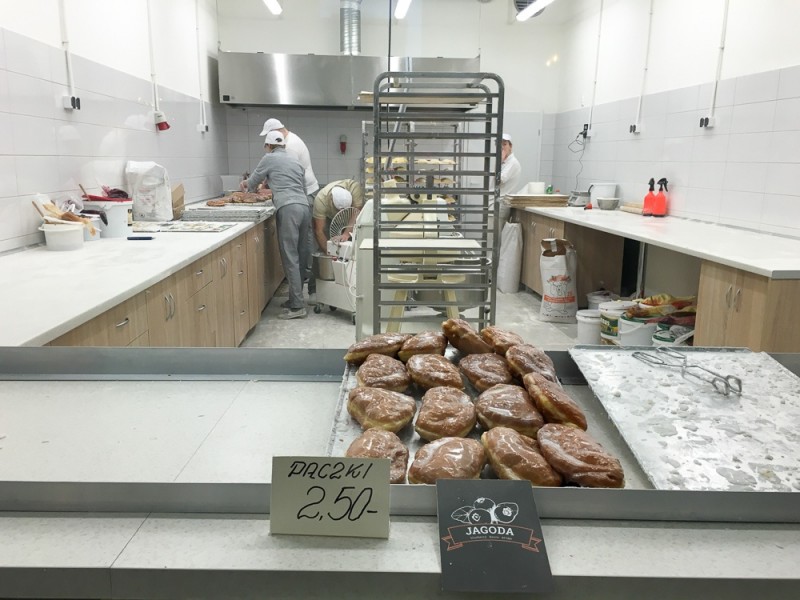 Scattered around the city are over 300 dwarfs. Yes, that’s right. Dwarfs. Actual dwarfs. Well not real ones, you silly. Little bronze dwarfs. The dwarfs were placed all around Wroclaw to honor a Polish anti-communist movement called the Orange Alternative. You will stumble upon these little fellas everywhere you go in Wroclaw, but if you want to know exactly where they are you can get a map with their location. Alternatively (see what I did there), you can hop on the free dwarfs walking tour.

Fun fact: Wroclaw has roughly the same number of students as German capital Berlin but the latter obviously has way more residents than Wroclaw. The university district is located just north of the Rynek and consists of a few very beautiful historic buildings as well as your typical Eastern Europe apartment blocks. 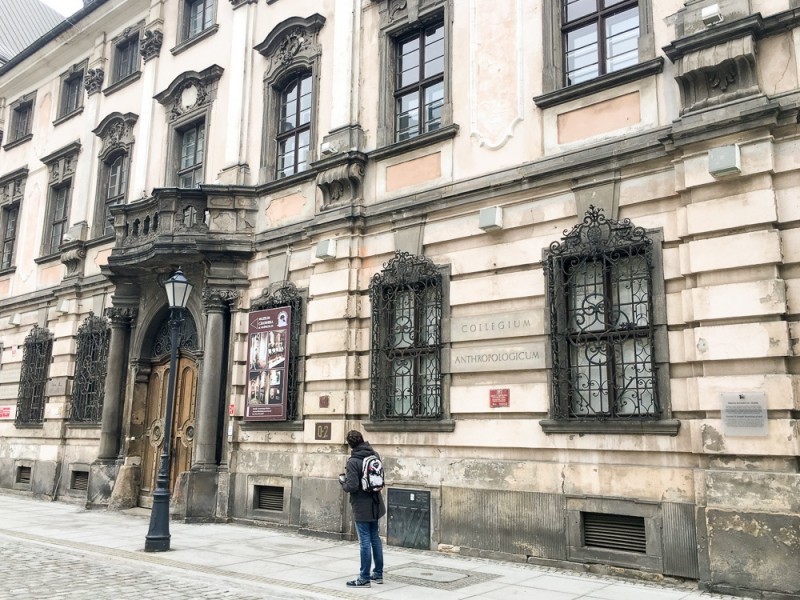 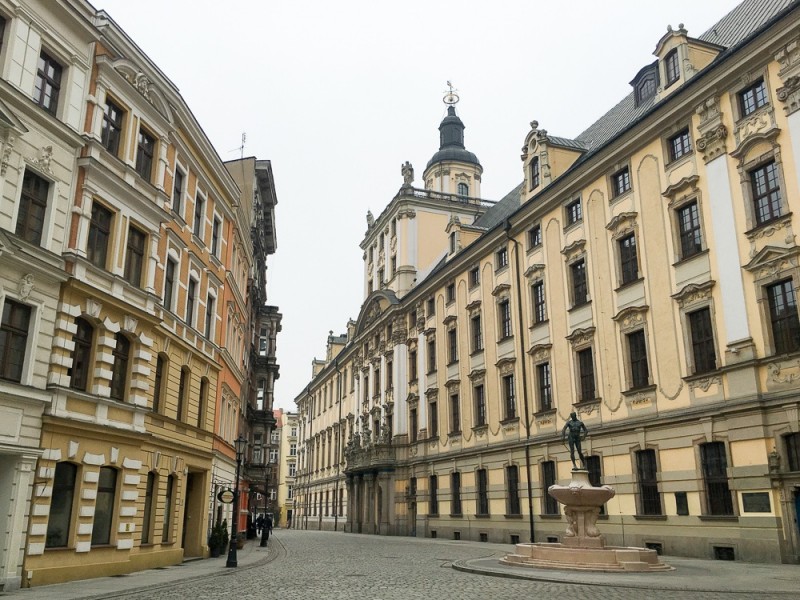 You can find a lot of cheap eats and hipster coffee places here. Like a lot, a lot. It amazed me how many cool cafes and coffee places Wroclaw has. If you’re looking for decent and affordable food with a hipster vibe, I can highly recommend: Zupa, Las, Parish and FC Caffe.

Wroclaw is located along the Odra river which has created the city’s 12 islands that are connected by over 100 bridges. If you head north from the Rynek and cross the university district you’ll stumble upon the river banks. Take the red bridge to Sand Island (Wyspa Piasek). 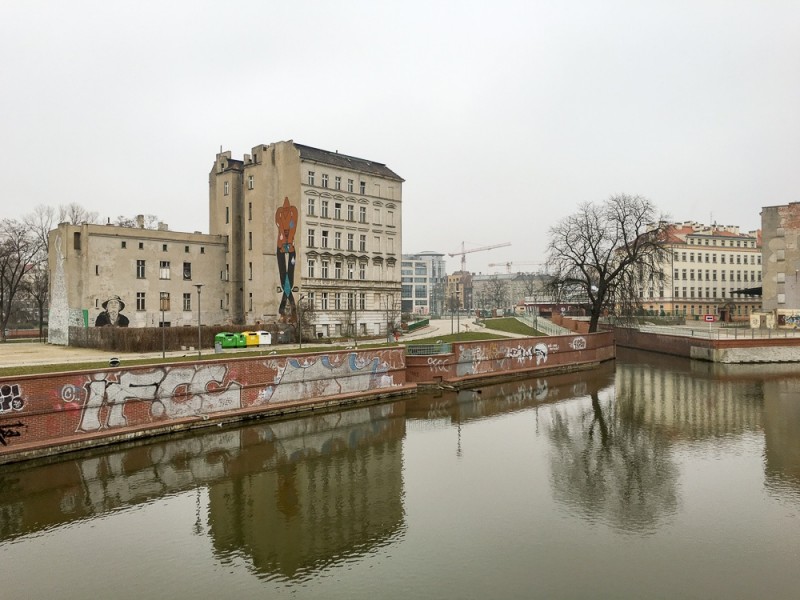 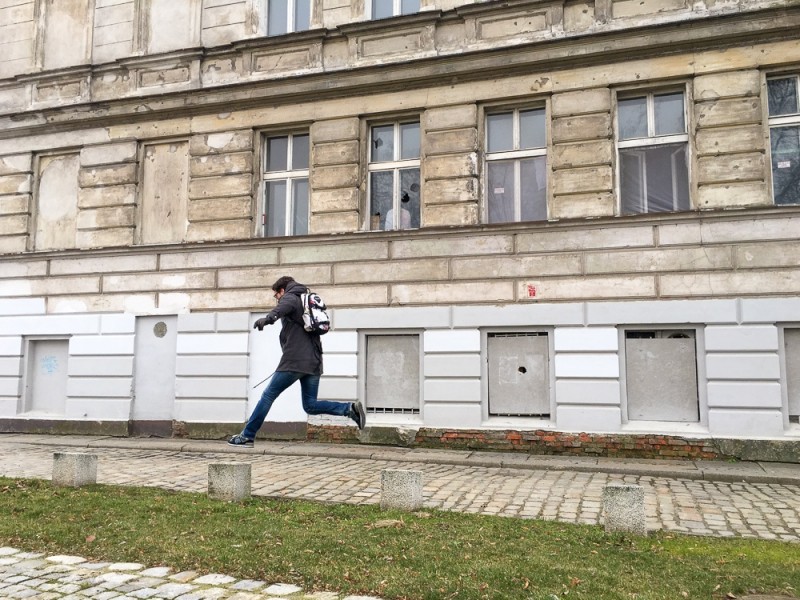 From there you can take the beautiful Tumski bridge to Cathedral Island (Ostrow Tumski).This bridge is also known as Lover’s Bridge because it’s very popular to hang a padlock to the bridge and throw the key in the river for eternal love or something. Hm, where have we seen this before? Oh right, all over the world. Even though it makes for a colorful sight and I do love the sentiment, I’m not a fan of this practice since I think it’s a total destruction of beautiful bridges. Did you know the Paris version of lover’s bridge is now so crazy heavy that the beautiful historic structure of the bridge might not hold all the extra tonnes. Seriously people, write each other a love letter – now that’s romantic! 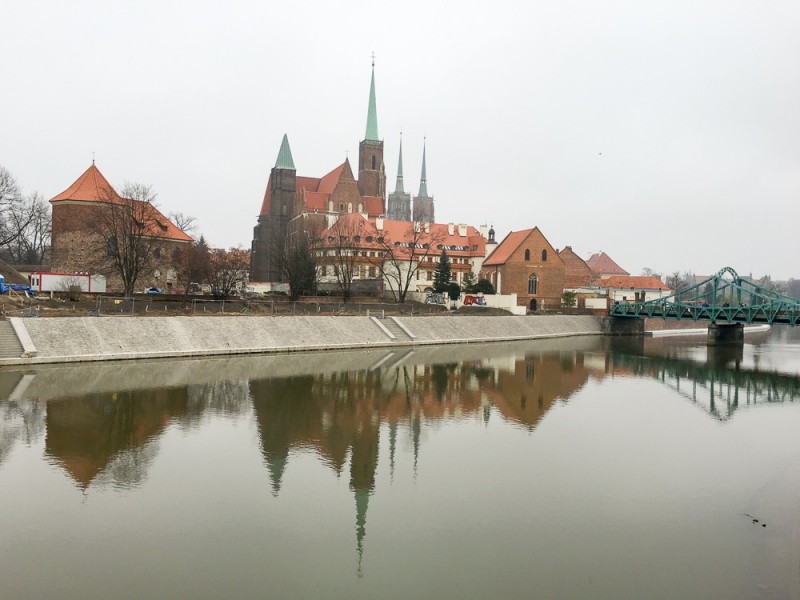 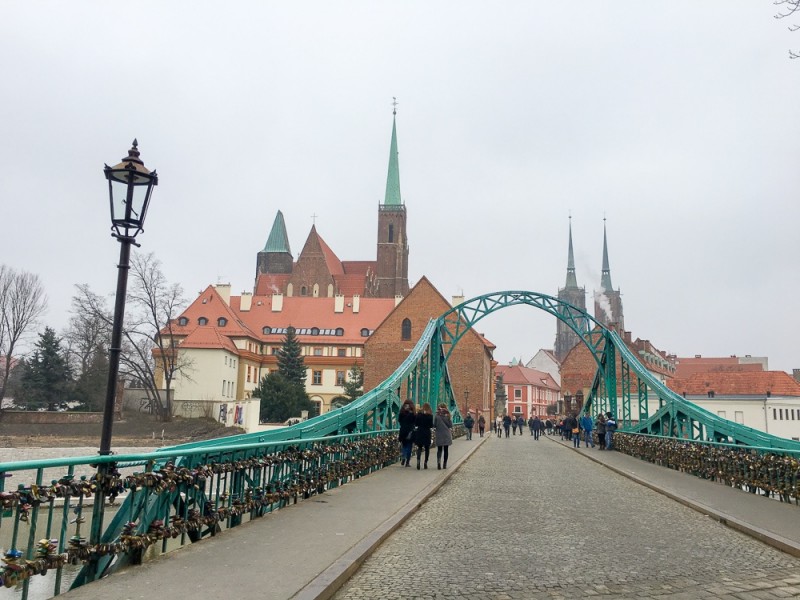 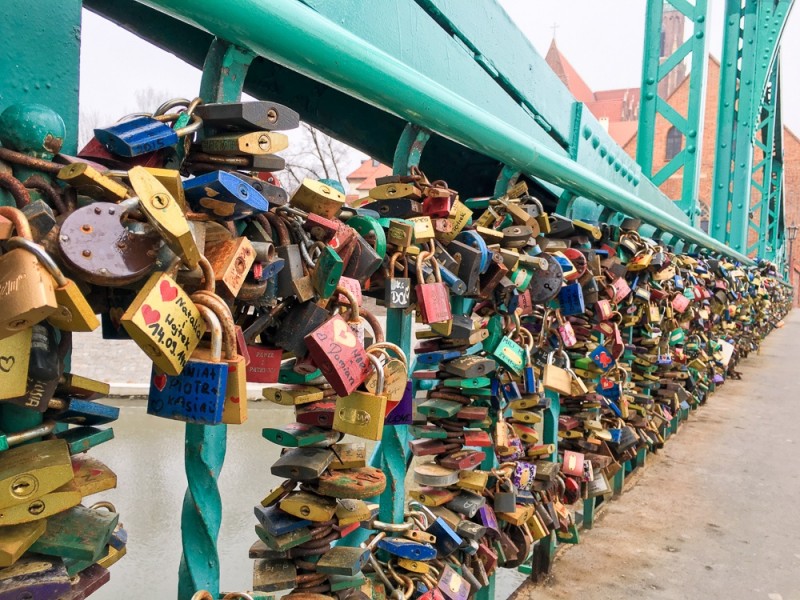 Once you get to the cathedral make sure to go inside and find the little stairway going all the way to the top. Don’t worry, part of it is by elevator so you don’t have to climb your way to the best view over Wroclaw. 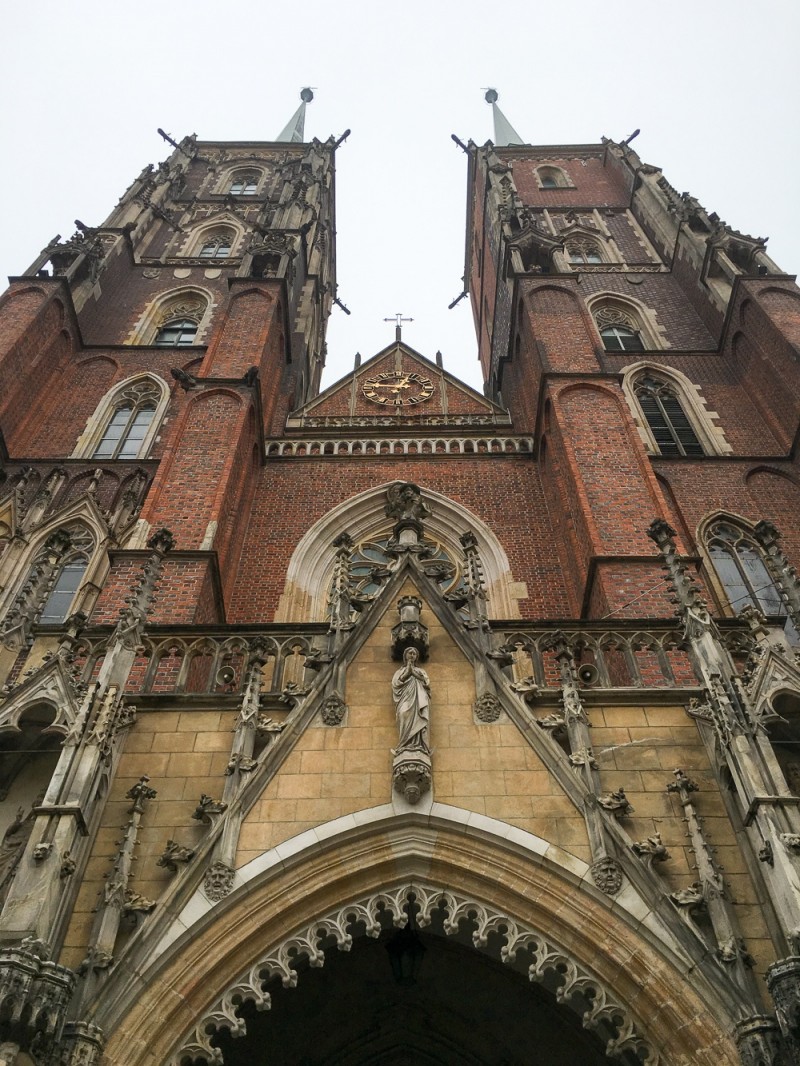 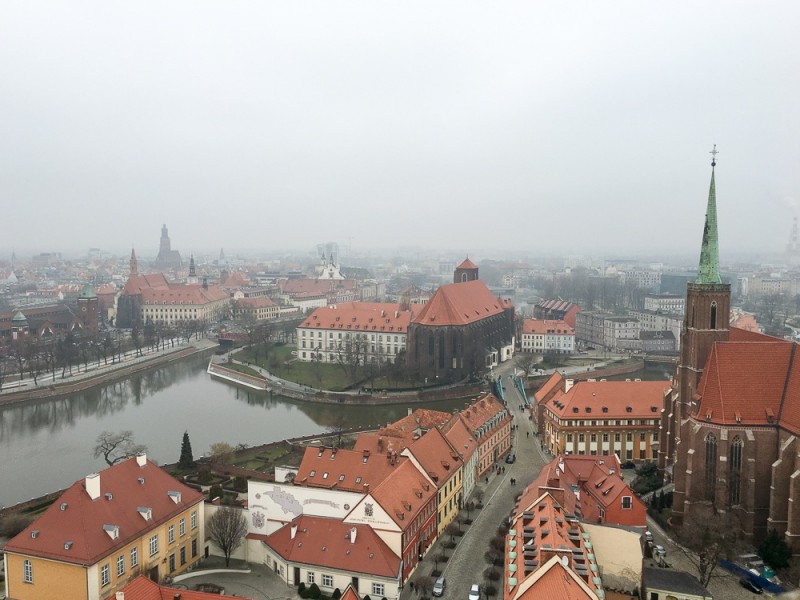 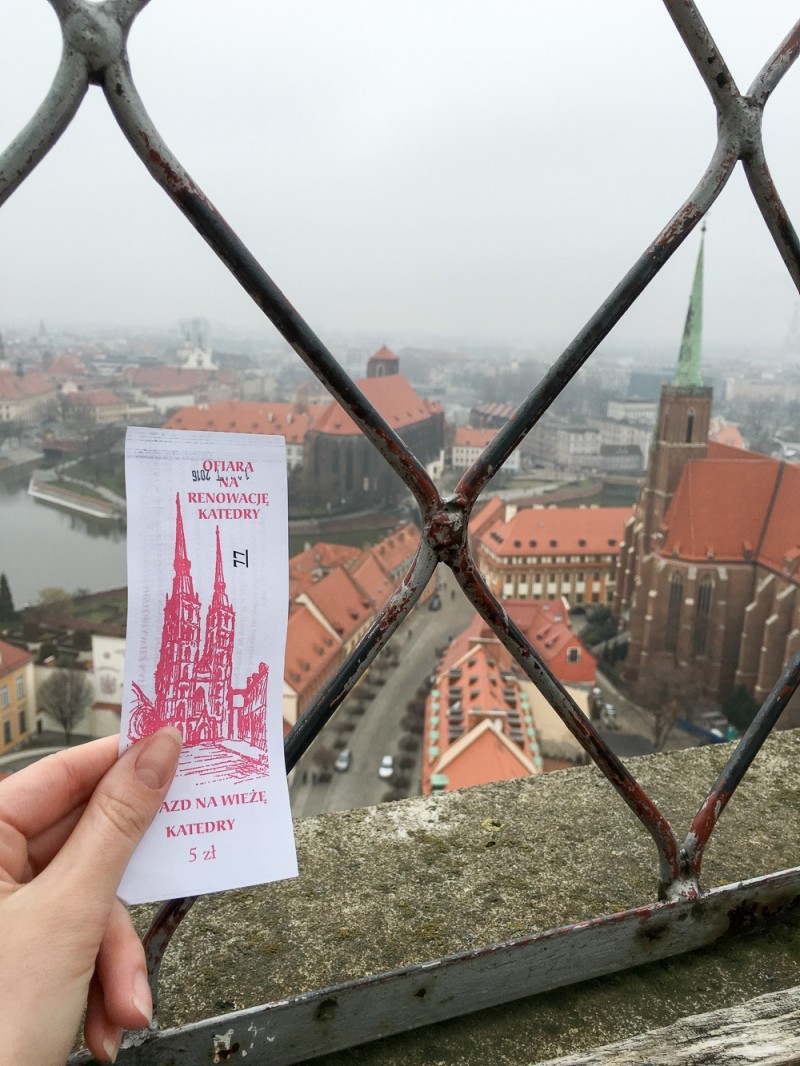 On your way back to the Rynek make sure to pop into the Hala Targowa which is Wroclaw’s main market hall. 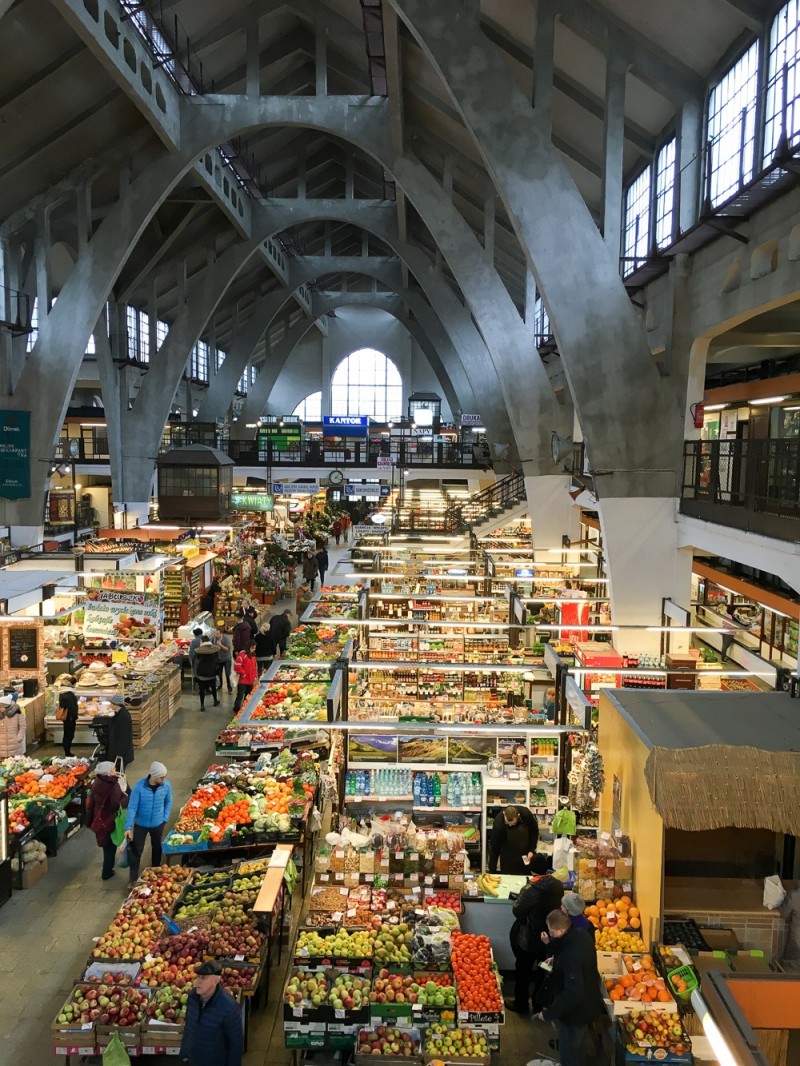 Up, Up and Ballet

On our food tour we overheard someone saying they were going to the ballet at the Wroclaw Opera later that evening for only 30 zloty. So we walked over to the Opera and managed to get two last minute tickets for the premiere of the ballet Anna Karenina. There were no seats left so for 30 zloty (€7) we bought ourselves a standing ticket at the 4th balcony way up high. When we got there we saw that there were a few rows of seats and apparently we could take one of those seats as long as they were still available. So we picked two seats with a reasonable view and hoped no one would tap us on the shoulder to tell us to get lost. We got lucky so for the price of a standing ticket we got to sit our asses down and watch some beautiful ballet. 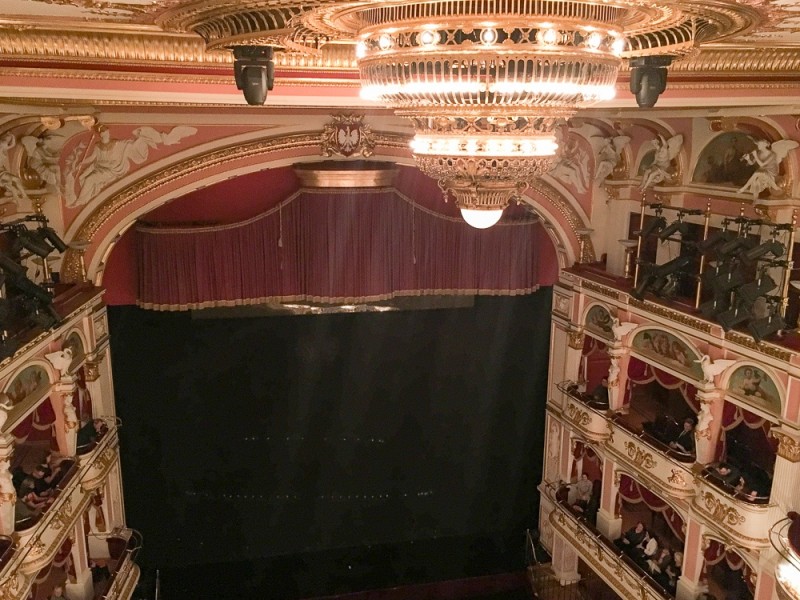 So there you have it: why we fell in love with Wroclaw. Seriously, it is now one of my top five weekend getaway destinations. Not to mention one of the cheapest. We stayed at the very good PURO Hotel for two nights for only €115. Just pick a date and go! (And also: don’t forget to bring your camera like we did so you have to rely on your iPhone camera…)

Today we are off on yet another adventure: we’re going to beautiful – and rainy – Scotland for 10 days of nature, relaxation and whiskey on the Isle of Skye. I’m super excited! Have a good one everybody, HAPPY WEEKEND!