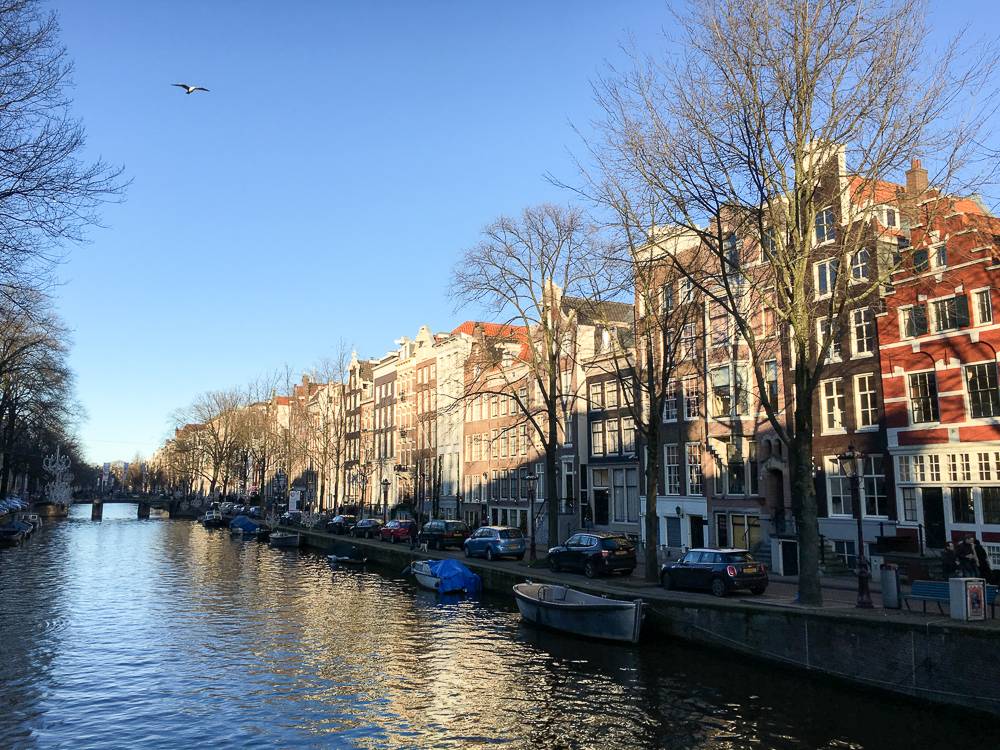 Last weekend was the fourth edition of the Amsterdamse Hotelnacht (Amsterdam Hotel Night), an event where local Amsterdammers can stay in participating hotels for a lovely Amsterdam staycation. This year we chose to stay in the DoubleTree by Hilton at the NDSM wharf, the industrial and creative hood at the old dockyards in Amsterdam North. Since we have family in North we regularly take the ferry across the IJ but we hadn’t really explored the NDSM hood before. So we packed our bags, said adios to our own house, and off we went on our little Amsterdam getaway. 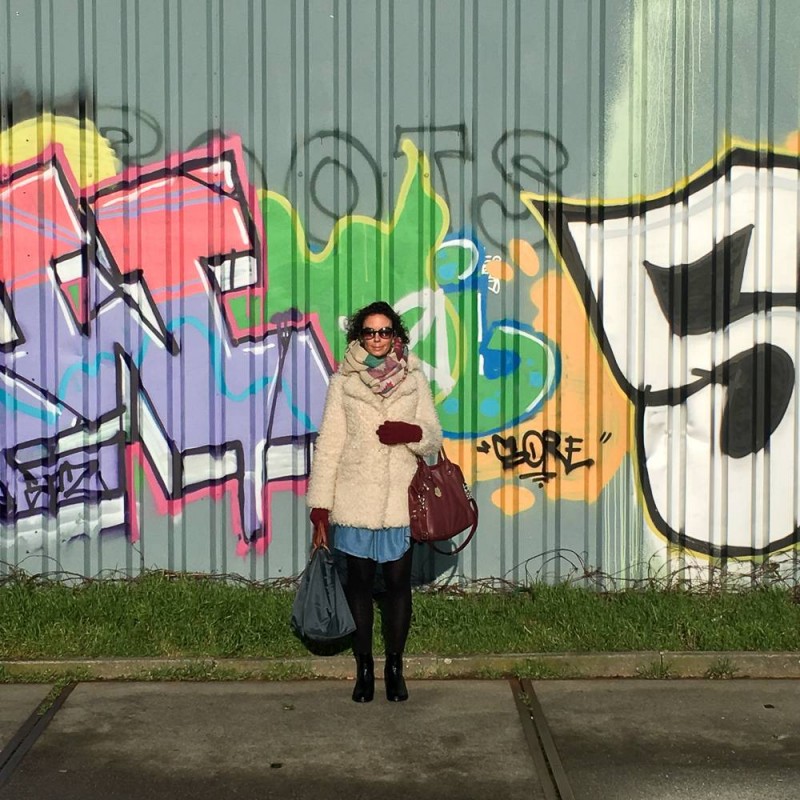 The NDSM part of town has a rough exterior as you’d expect from any old dockyard area, which is mainly what makes it so cool. The old abandoned shipyard buildings are still scattered around the wharf and are nowadays decorated with colorful street art. In recent years a few cool cafés and restaurants opened up shop here and more and more people – tourists and locals alike – find their way to the hood. Even though I can only applaud DoubleTree for acknowledging the potential in this part of Amsterdam, I sincerely hope that the area will maintain its rough and industrial vibe, and that the city council will protect the old wharf buildings from becoming a glitzy posh neighborhood. 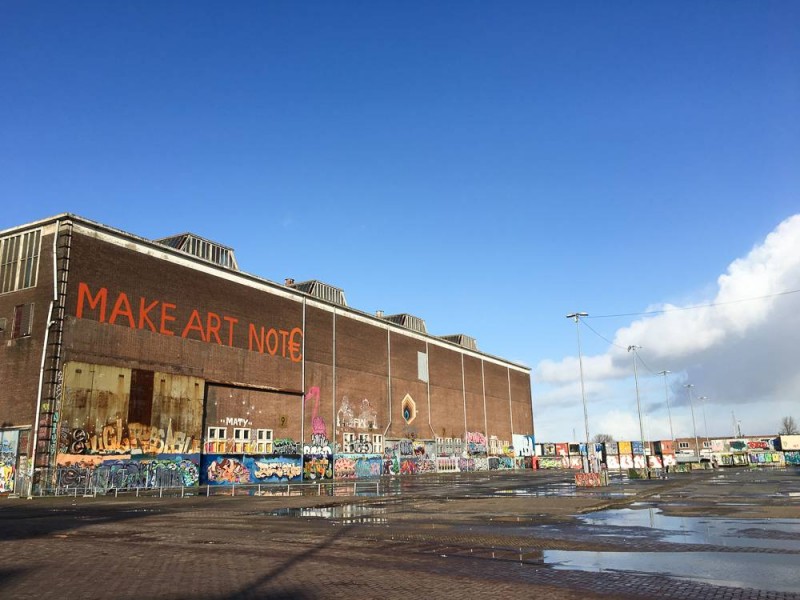 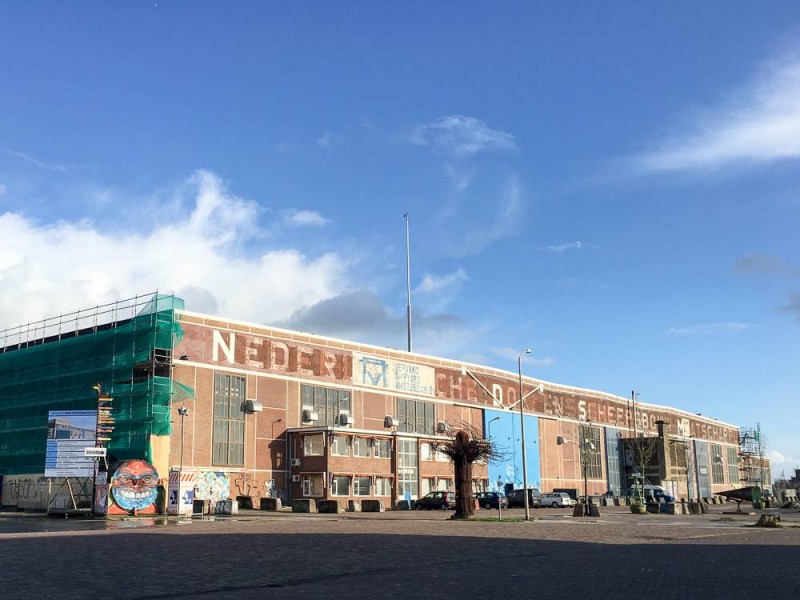 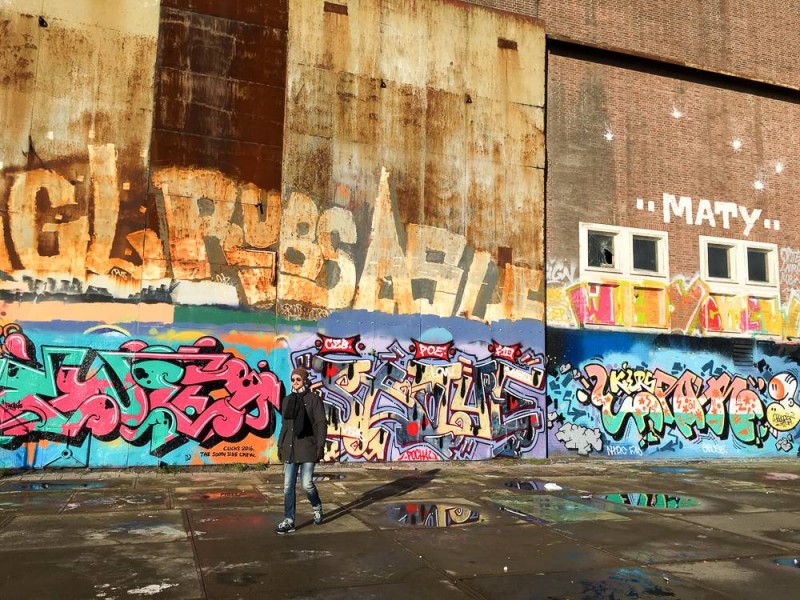 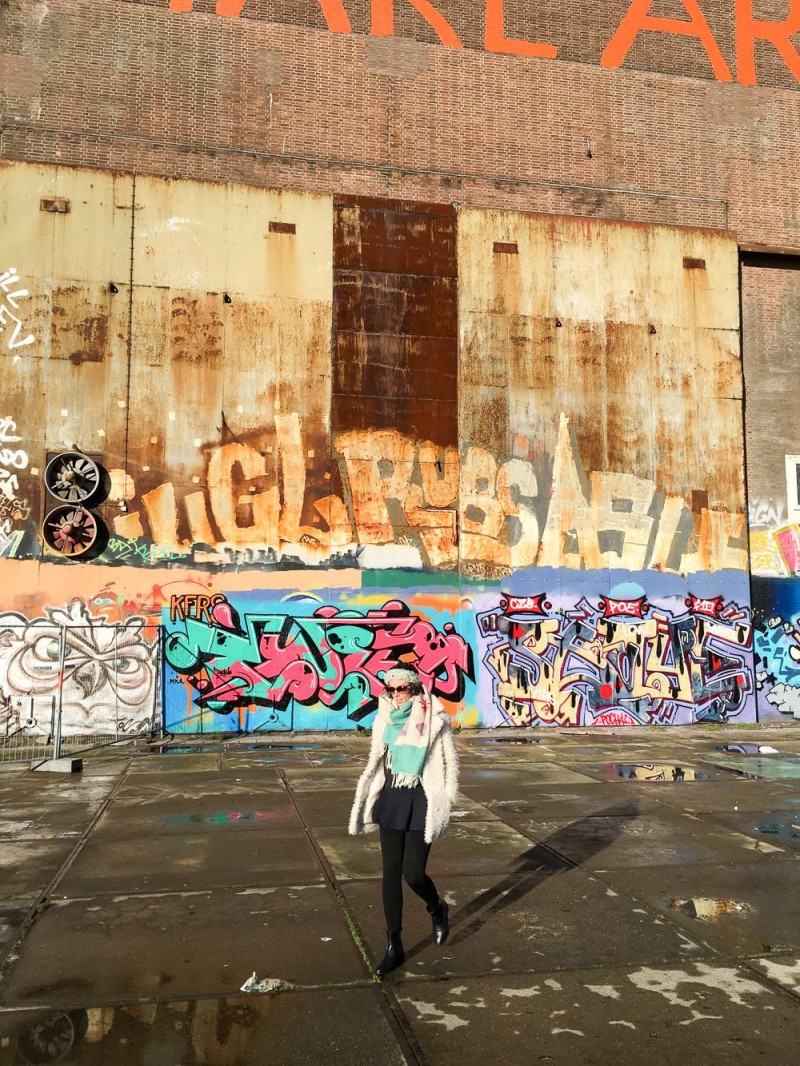 We had lunch with one of our BFF’s at Pllek, which is basically a restaurant meets yoga studio meets club since they host all kinds of events in their little container village. Yes, it’s located inside a few containers that are stacked together – it doesn’t get more industrial than that. In summer Pllek is very popular because of their beach meets terrace with an amazing view over the IJ, but in winter you can cozy up inside at the hanging fireplace. Great food, great vibe. What’s not to love? 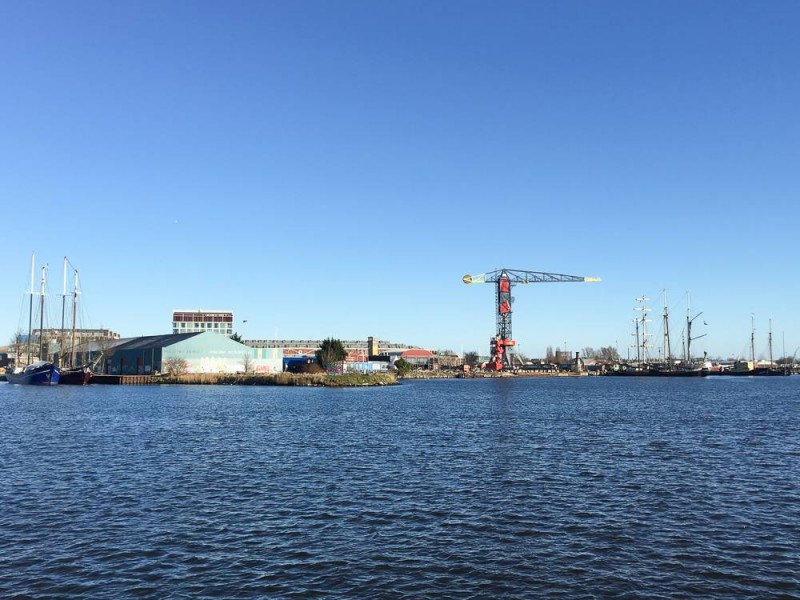 In the evening we got back to central Amsterdam and did something that I was very excited about: a canal cruise. Yes I know, we’ve been living in Amsterdam for years – with a view over the water no less – but I have to admit that the only time I did a canal cruise was way back when I was a little kiddo. It’s totally touristy but also very much part of the typical Amsterdam experience. This was also the closing weekend of the fourth edition of the Amsterdam Light Festival, a festival of light and water across the canals of Amsterdam. From our home we have been seeing these cool light sculptures for the last few years but we’ve never experienced them from the water. Shame on us, because it was very cool. Artists from all over the world are invited to submit ideas and concepts within a specific theme that changes each year. This year the theme was “friendship” so all the artwork had something to do with that concept. I highly recommend getting out on the water for the next edition of the Amsterdam Light Festival, which will be held from late November 2016 till mid January 2017.

After our canal cruise we had another amazing event on our staycation calendar: dinner and drinks at the opening night of pop up restaurant Roomservice at Olof’s. This temporary restaurant is hosted in the oldest chapel of Amsterdam and Michelin star chef Chris Naylor is working his magic in the kitchen. His own restaurant Vermeer, and the NH Barbizon Palace Hotel it’s located in, are closed for renovations till May 2016 so they came up with this idea of doing a pop up restaurant in the Olof’s Chapel while using the hotel’s old furniture. So there are old curtains, nightstands and lamps that are being used to decorate the chapel and you get a “room key” with your table number on it. All very nice touches. 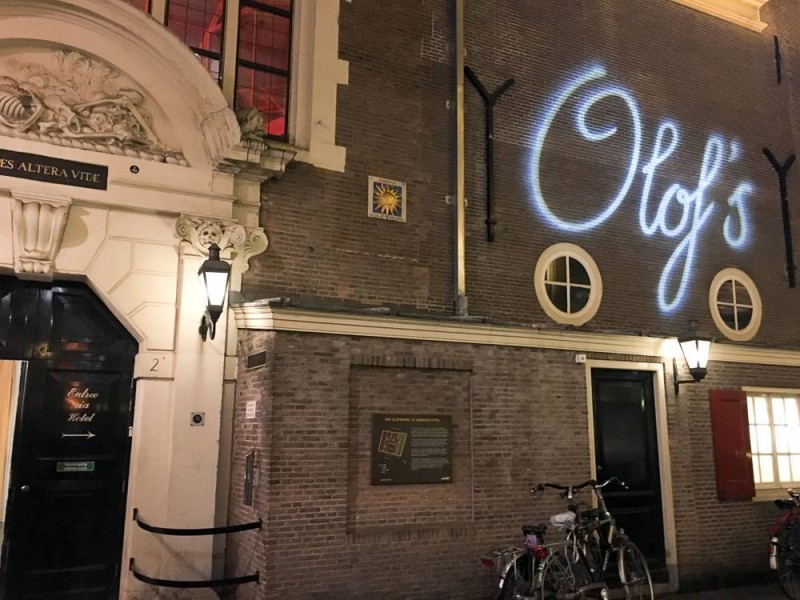 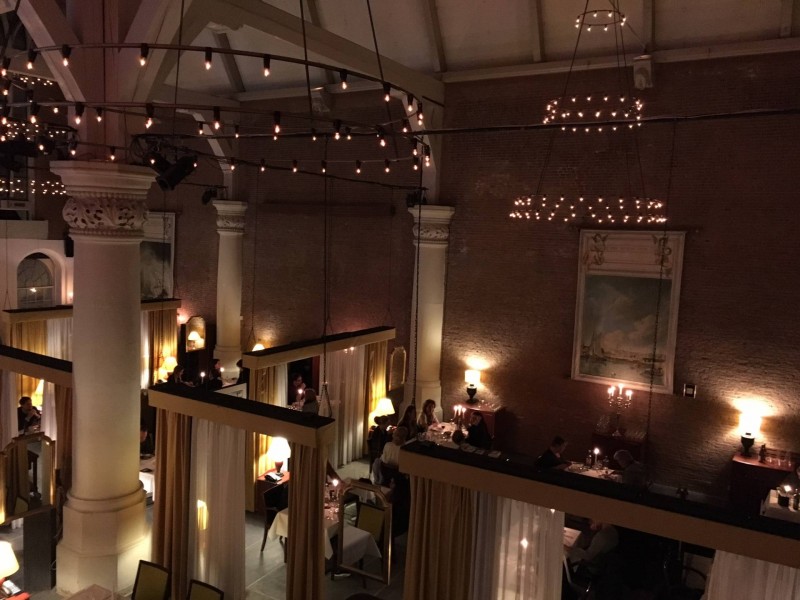 We had cocktails (very good ones might I add) at the Vermouth bar on the balcony before stuffing our face with the amazing food. Although not a vegetarian restaurant, veggies are the main draw here but you can order meat or fish as a side dish. Everything was delicious and I especially enjoyed the starter with salt-crusted pumpkin and pear. YUM! I think it’s safe to say that we’ll be back for more before the pop up closes on April 30th.

After a bit too much booze it was nice to get some fresh air on the ferry back to NDSM. We didn’t have the best night sleep thanks to our very loud low-life-pot-smoking-typical-Amsterdam-tourists as neighbors but the hotel staff was very accommodating and gave us some fresh baked cookies in the morning. Waking up to this view though… We are the worst Amsterdam skyline snobs since we have the best view over the city from our own bedroom window, but this view ain’t half bad, am I right? 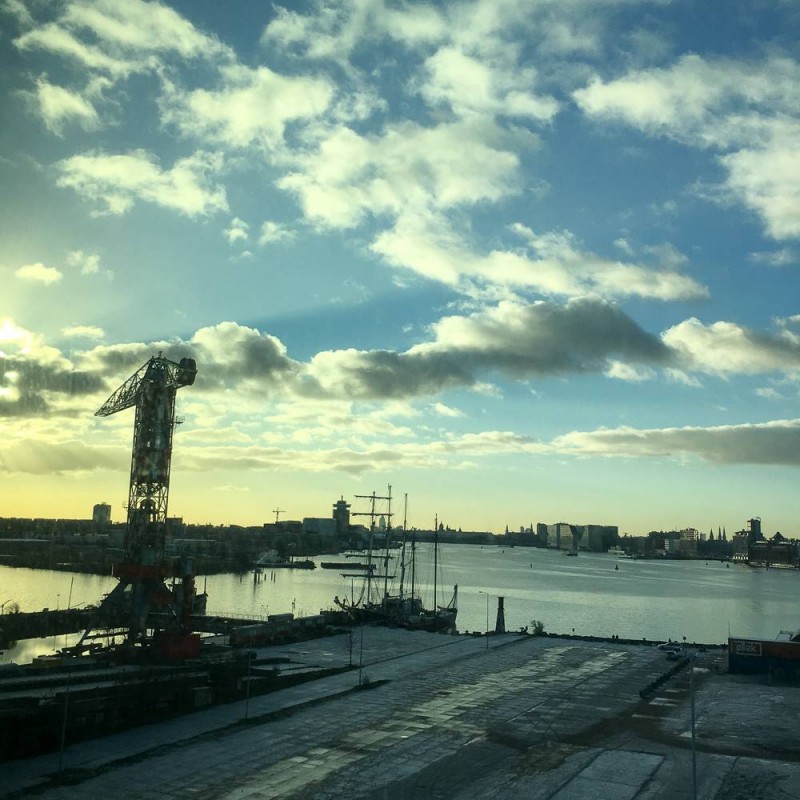 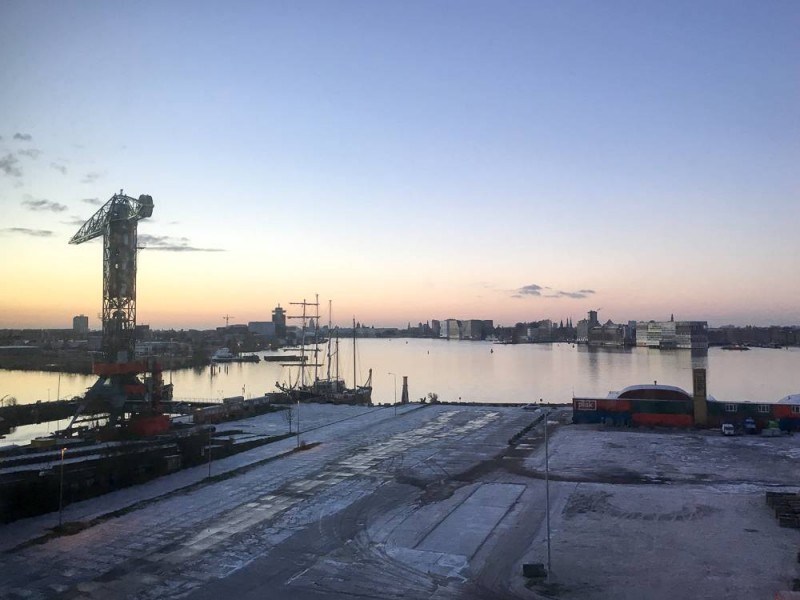 We had a nice breakfast before we checked out and got back on the ferry. Since you can’t really have an Amsterdam staycation without a stroll along the canals, we headed to our old neighborhood the Jordaan. It was the perfect winter weather: cold as ice but also sunny and with clear blue skies. 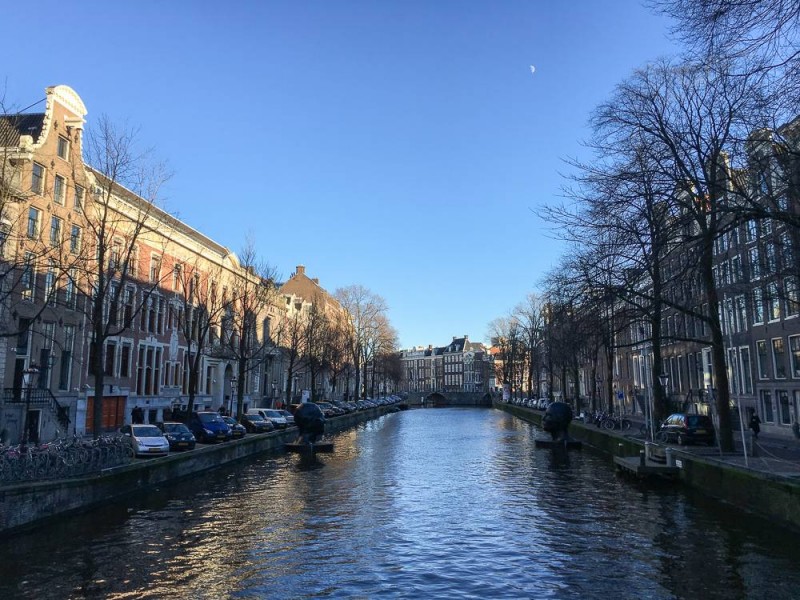 We popped in the Amsterdam Photography Museum FOAM which is housed in a beautiful canal house on the Keizersgracht and currently hosts a very cool collection of photos from Francesca Woodman. We ended our lovely Amsterdam staycation with some friends, some wines and a homecooked meal at our friends’ temporary place near the 9 straatjes (Nine Streets). It was the perfect weekend getaway that made us feel like we were on a little vacation without even getting out of town. I can highly recommend being a tourist in your own city! 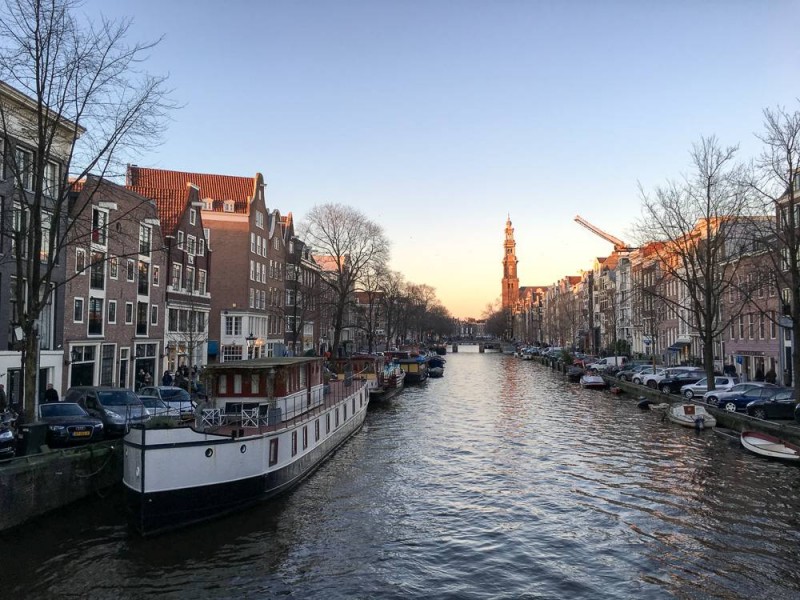 This weekend we are really getting out of town, out of the country even, for a family winter weekend in Winterberg in Germany. Hopefully there will be enough snow so we can get some proper winter action! Happy weekend everybody!