Yes, that’s right. Another rowing world championship in Eastern Europe! This time around we travelled all the way to Bulgaria. And to be fair, if it weren’t for all these rowing championships, my Eastern European Countries check-list would be a lot thinner. It’s not that this area doesn’t attract me, on the contrary. I would love to cross all former Soviet Republics since I’m highly fascinated by the fading glory of communism (I blame my Russian roots). But my travel wishlist has so many other cool and fascinating places at the top! And fading communist glory is also present in China and North Korea (stay tuned for posts on these amazing countries – summer 2013!). And then there are the Central Asian republics (the “Stans”), Cuba, Venezuela, Vietnam… Okay stop. First: Bulgaria!

After yet another flight with Flop-Flop Air we arrived in steaming hot Sofia, the country’s capital. The rowing championship however, took place at the more inland city of Plovdiv (or as we liked to call it: Plovplov). I’m guessing that this doesn’t ring a bell (totally justifiable), but Plovdiv is supposedly one of the oldest cities in the world with its 8000 years of history. That’s right. So. Plovdiv it is. And you guessed it: beeeaaauuutiful!

It was originally a Thracian city, but of course the Greeks and Romans have ruled Plovdiv as well. This has led to a nice little old city centre (appropriately named Old Plovdiv) which is situated on a hill, and where you can stroll around along the centuries-old buildings and where you can sprain your ankles on the centuries-old cobblestone streets. Again, so so beautiful.

Summers in Bulgaria are crazy hot so we also took a plunge in the Maritsa river, which crosses the heart of the city. You’d think, well yeah, it’s hot so everyone enjoys a refreshing swim in the river, but no. No no no. Not a local in sight. Okay, only a few drunken anglers who were slowly nodding their heads. Maybe the fact that there are snakes in the river has something to do with it… SNAKES! Okay, we’ve only seen one, but still… IEKS!

And since we travelled all the way to beautiful Bulgaria for some serious rowing action, we got our lovely orange accessories and headed out to the rowing course for the world championships. It’s always so cool to watch the best of the best compete at such a high level. Unfortunately, no medals to bring back home this time.

After my bro’s final performance on the international level (he’s a retired rower now…) we – obviously – did some crazy clubbing since this has become a tradition over the years. And might I add, you can do some serious clubbing in Plovplov! The only downside is that most of the clubs are scattered over town which led to a new personal record for me (which was set at 6 people in an Indian rickshaw): we stuffed ourselves in a taxi (nót a van!) with 12 (!) people! Leg here, arm there. You get the idea. Eventually, we ended up in some sort of living-room-club, which was pretty cool. We were just hanging around on the street, trying to figure out our next destination, when we heard some good tunes. We looked up to a balcony, saw some people, pushed open a front door, walked up the stairs, and then – TADAAAA! -we’re standing in a club. Seriously, a club. With a bar, a dj, lights and everything. In a Bulgarian apartment building. How cool?! Oh, and if you needed a bathroom break: up the stairs, in the neighbours’ house! Sorry guys, no pictures :). 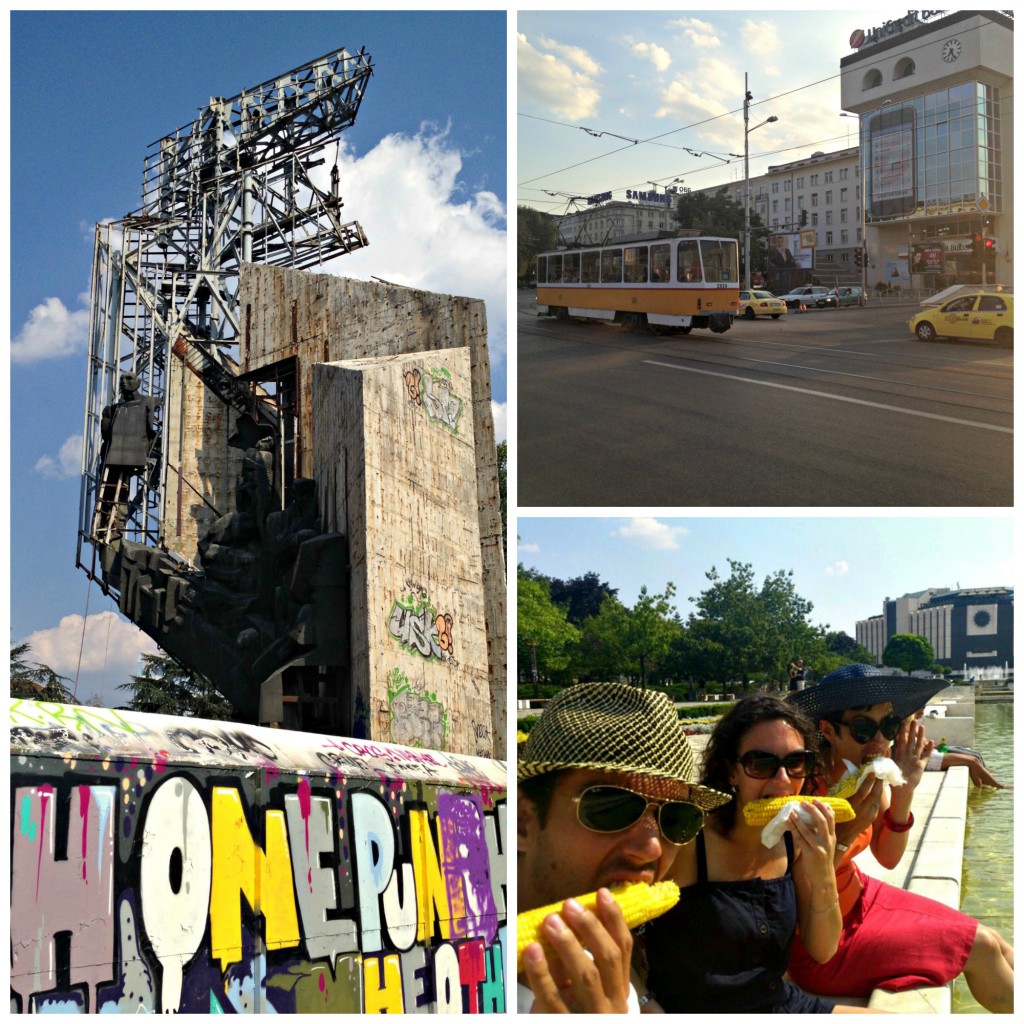 Of course we did not skip Sofia. And also in this lovely city, so many historic buildings and overall a really pleasant vibe. Unfortunately we didn’t have time to test the cool clubs our guesthouse-keeper told us to check out, so I guess we have to go back for that. And we will :). By the way, such an amazing guesthouse! If you’re looking for a clean, cozy ánd eco-friendly place which is also centrally located check out Hello Sofia Guesthouse. Bulgaria truly surprised me. And since we only had time to discover the two largest cities, I’m keeping Bulgaria on the list! There supposedly is a pretty nice skiing area which could make a cool wintertrip. Or maybe a road trip along the Black Sea. We’ll see…