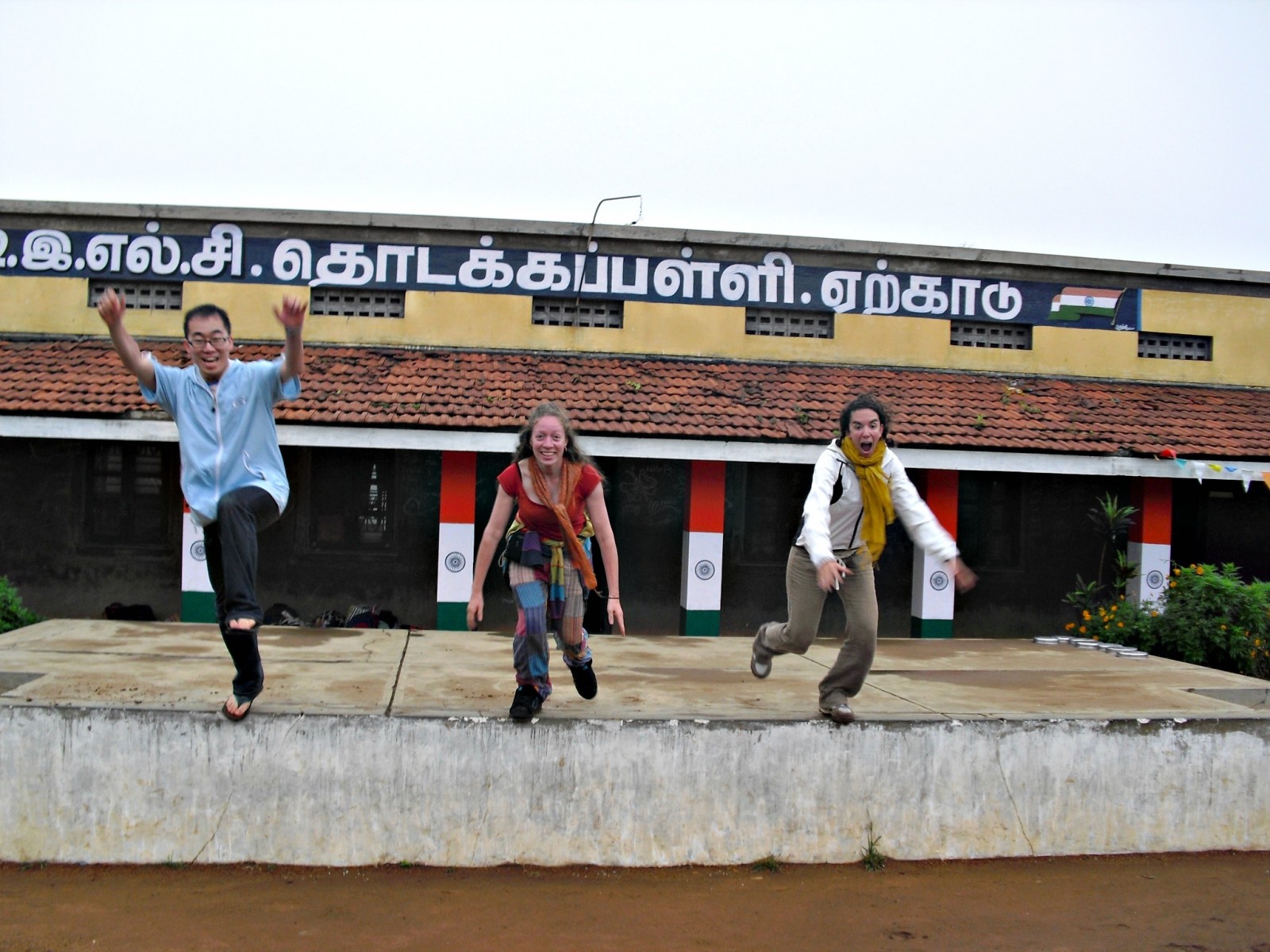 As I said before, Yercaud (Jerkat) is so very beautiful. I’m so extremely far away from the “modern world”, I love it.

Taking a shower with a measuring cup is no longer a big deal, and I squat down on an Indian toilet without any problems. The cockroach count in our little room has almost reached double digits, and it is kind of a routine to get rid of those disgusting things before we do anything else upon entering the room. After we finished our work at the Yercaud elementary school last week we were pretty proud and excited that we managed to give these little kids a nice yard and a cool playground. They were soooo happy! Super cute! Of course I really got attached to one little boy and given he’s an orphan I seriously considered putting him in my backpack and taking him home with me :). 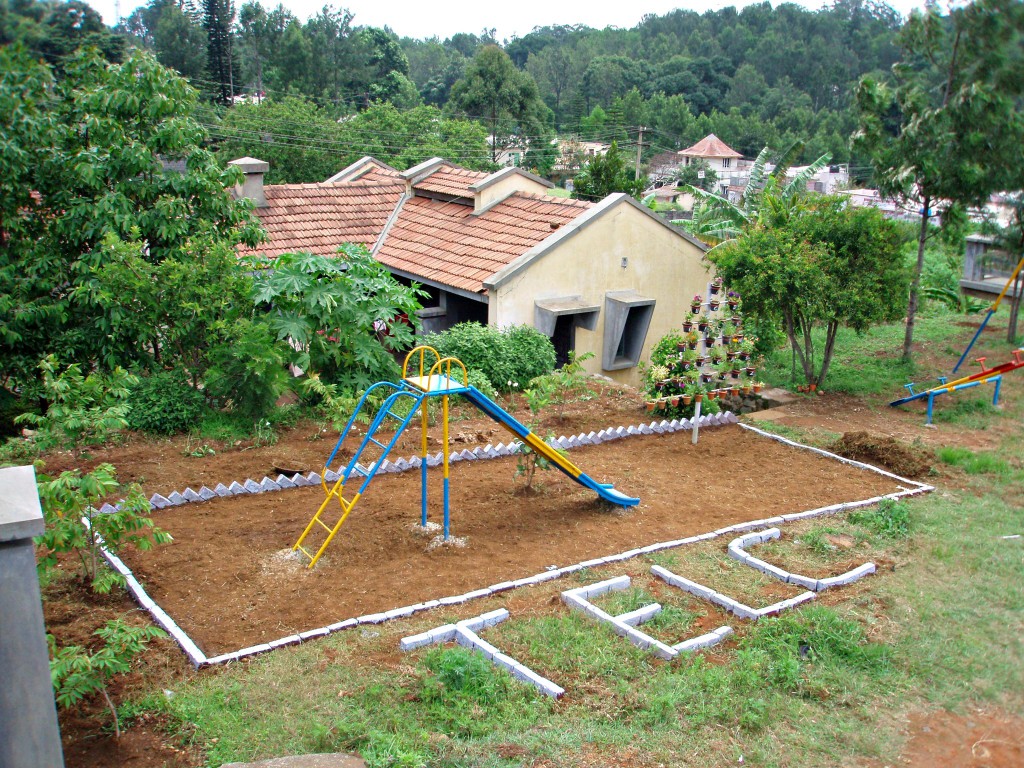 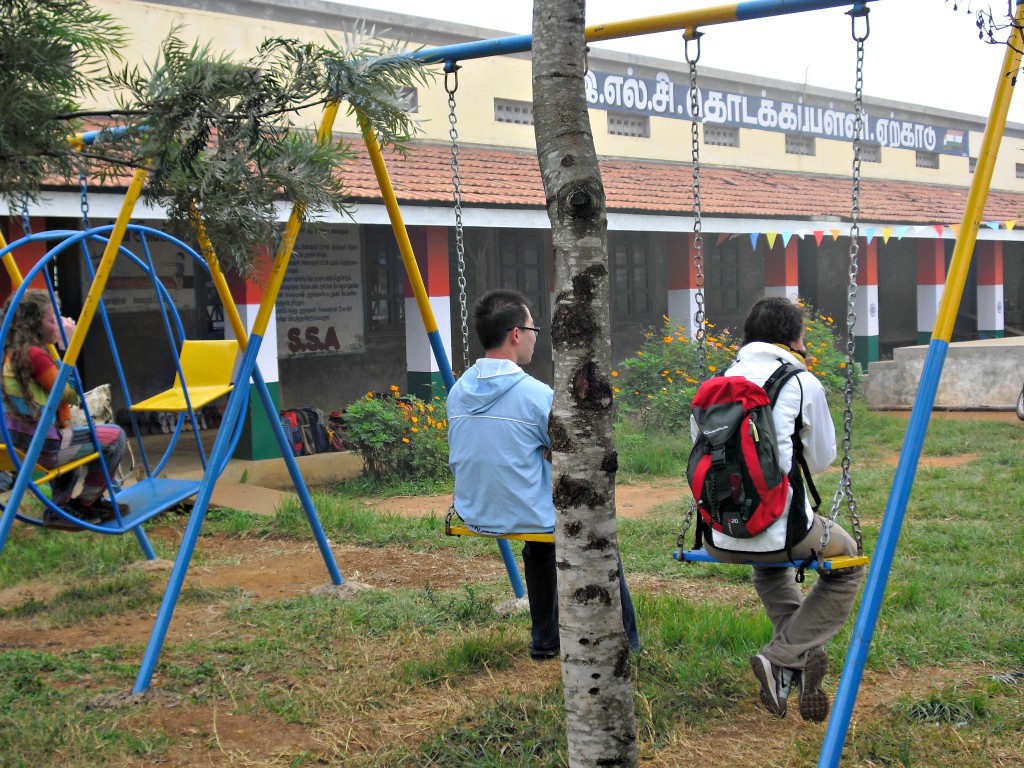 We get up at 7:30am and we have breakfast around 8:30am in a tiny eatery. To be honest, I struggled to eat spicy Indian food at this time in the morning but now I kind of manage to tolerate potatoes, vegetables and rice an hour after your alarm went off. At 9:30am we start our work at the school. We get to interact and play with the kids quite a lot and we can drink all the chai we want. At 1pm we have lunch at another tiny eatery in the village and the rest of the afternoon we work at the school again. Around 5pm we finish our shift and then we usually do some hiking in the mountains surrounding Yercaud. Since it gets dark pretty early (around 7pm) we stay in our rooms most of the nights where we have our daily meeting and afterwards watch a movie (if the electricity works with us…). 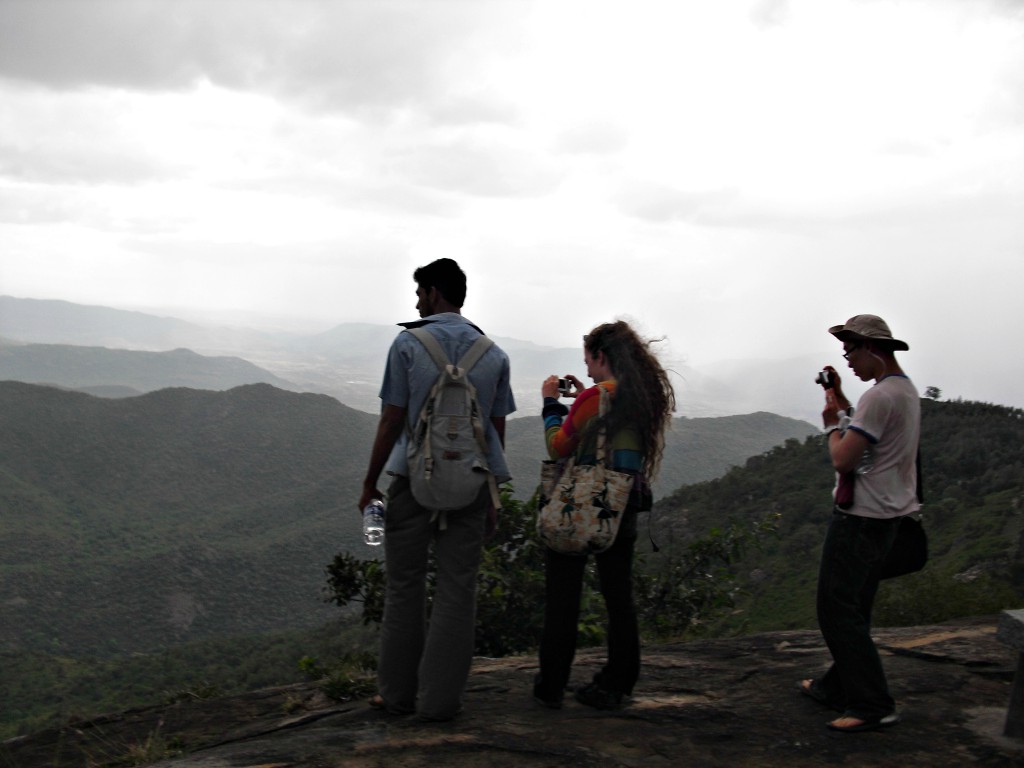 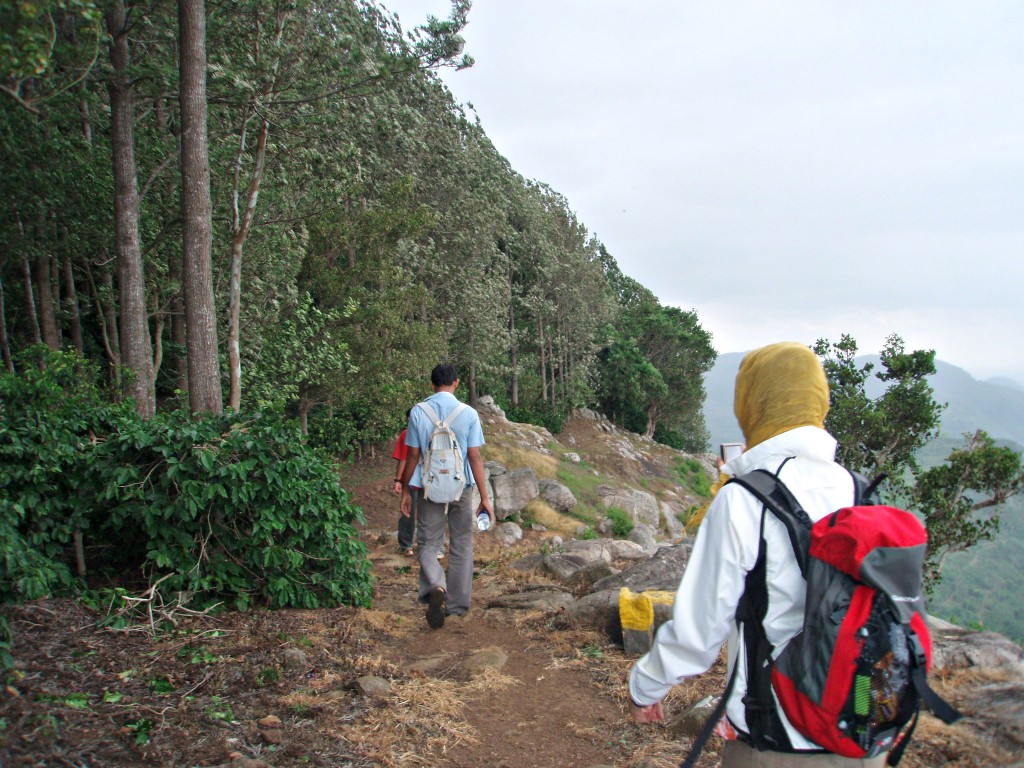 On wednesday there was some sort of celebration because a deceased Indian fella, who has provided a lot for the state of Tamil Nadu and its education system, would have had its 107th birthday. There were all these important(ish) people who attended the celebratory events at the Yercaud elemntary school and the kids gave some awesome performances which almost made me bite my lip off because it was too damn hilarious at times. We were seated at the front row (being the international guests and all) and there even was a journalist from the district’s newspaper. And these cute little kids just sang so completely off key and spoke so extremely loud that it was very hard to stay serious.

Yesterday we had the afternoon off and Siju – the Rotary president – took us to the coffee plantations owned by another Rotary member. So amazing! I felt like I’d been transported to the Max Havelaar period (yes, I know that was not in India). We did some serious hiking on the cliffs of the mountains (not recommended if you’re afraid of hights) and afterwards we were given a tour on the plantation. The beautiful home was an old English colonial style house, and boy, what an amazing home! Surrounding the house was a huge garden with all these different kinds of plants, trees, flowers and grasses. Such a tranquil place. I could have stayed there for days (weeks!) but unfortunately we had to get back to Yercaud town at the end of the day. Yercaud consists of 66 small (as in tiny) villages that are more groups of little cottages, and Yercaud town is the main village. 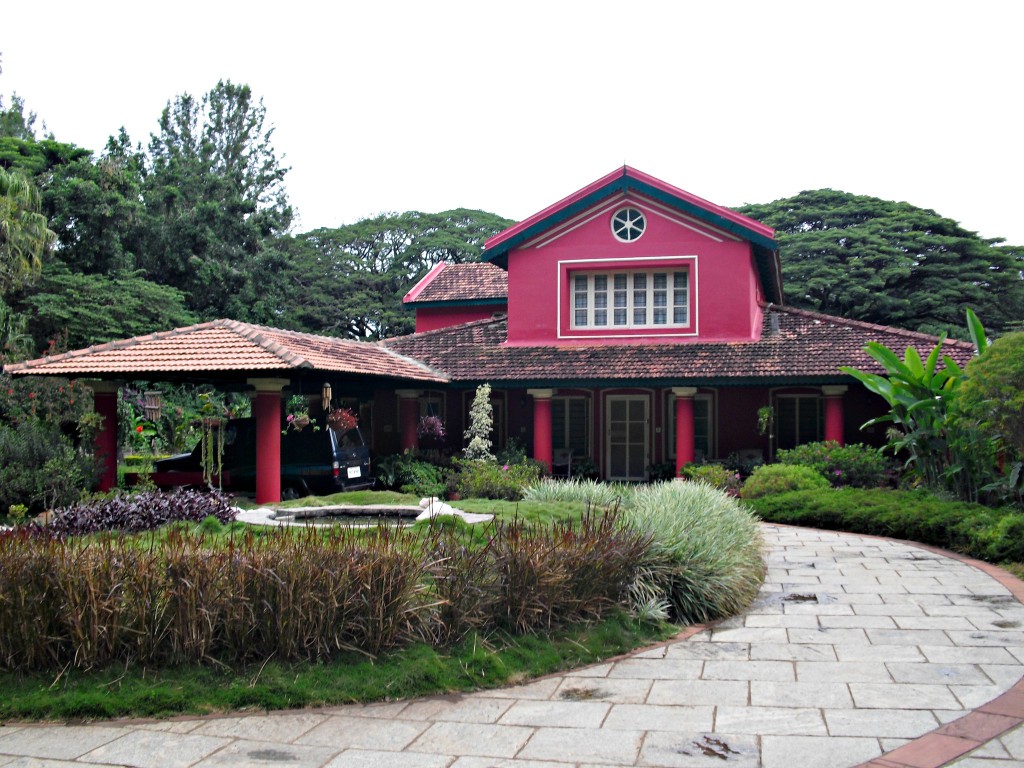 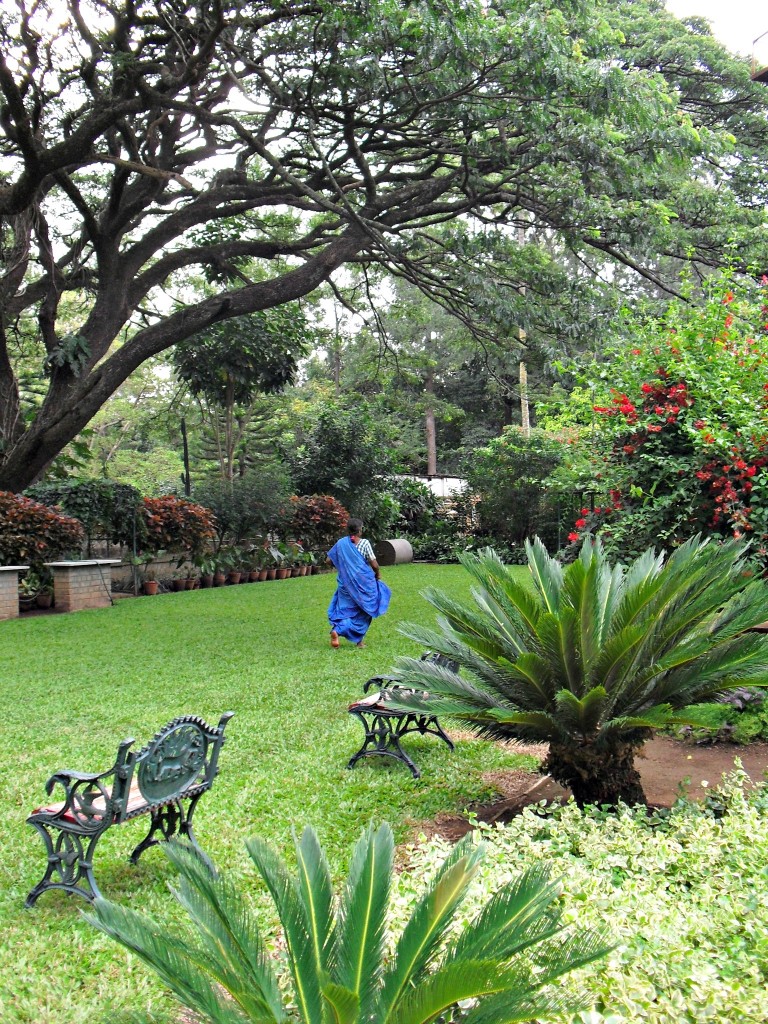 Tonight we leave for Madurai, for our weekend getaway. Our supervisor isn’t coming so it’s just the three of us. We really get along very well and we have a lot of fun. Especially Lee, the Korean guy, is quite hilarious mostly because his English is not that awesome so he gets the jokes usually too late and he makes these little Asian sounds (ooooh and aaaah – think Pokémon, Dragonbaal and Hamtaro). Josiane, my French-Canadian roomie is also pretty cool and she tells me all these fun facts about Canada. Goutham is our supervisor, and even though it’s his first time leading a group on his own, he’s doing very well. After our weekend trip we’ll be doing some other work and we’ll also visit the tribal villages. And we also have to do a country presentation for the Rotary Board so I have to prepare something with tulips, windmills and wooden shoes ;).

Okay, I have to pack my stuff now because we’re taking the bus downhill in an hour,yay!!