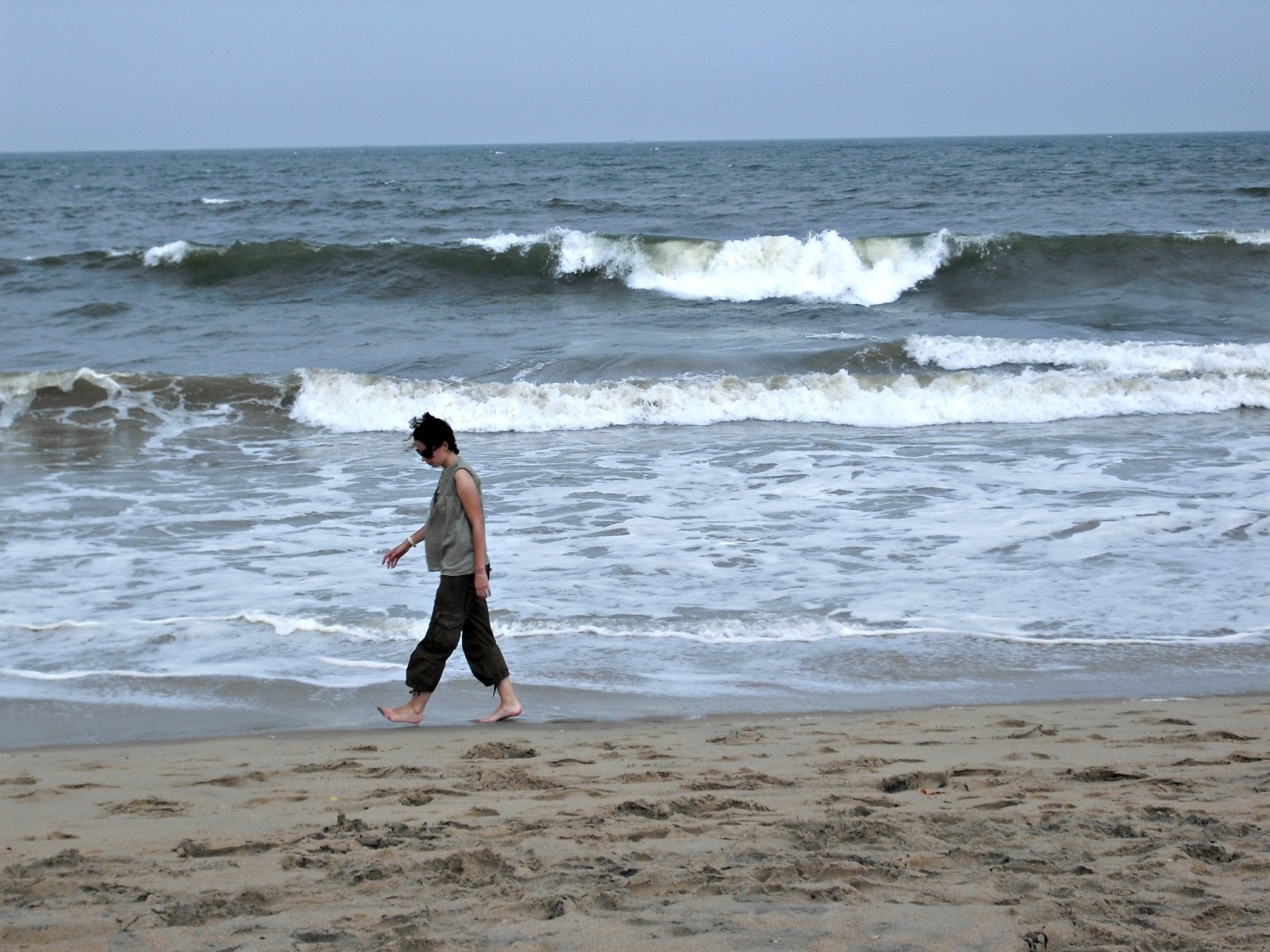 The next phase of my India adventure has begun and it is time for another update. I left Yercaud behind and the backpacking through India road trip has now officially started!

Last week was not the best week since I arrived in India because I was seriously ill… It was so serious that I even went to an Indian village doctor (or at least I hope he actually was a doctor) since I had severe breathing problems and I was constantly coughing my lungs out. Since the massive swine flu outbreak in India that is currently dominating the news, they were all pretty scared I had the swine flu. Lovely. So they got me on the back of a motorcycle and drove me, on the bumpy Yercaud countryside roads, to see the doctor. He was quite alright I guess, even though his “office” was a small hut without any lights. No swine flu and he just gave me a few pills. Since I didn’t really have a choice I took them, and truth be told, after a few days I was feeling better. Fun fact: the costs for this visit were 150 Rs (just over 2 euros). Not bad.

On thursday we had the meeting with the Rotary board which meant we had to do our country presentations. I shared all these little fun facts about Holland, my family and friends, and my life in general and they were especially interested in all the pictures and postcards I showed them. It was a very nice evening and it is really interesting to hear each others stories and compare daily life in India, Holland, Korea and (French-)Canada. Friday was our last day of work and the Rotary president took us to see the tribal villages which was both informative and fun. So many people in Yercaud county still live their lives the same way their ancestors did decades ago.

Saturday was goodbye day… My three Yercaud mates left early in the morning so for a while it was just me: the only foreigner in all of Yercaud. Pretty cool. I walked around a bit and tried to take in as much as possible since I knew I would probably never see it again. At least, not for a long time. In the evening my mate arrived and the next day we got on the bus down that steep hill again. Oh, and get this: another flat tire! For real! Unfortunately, they weren’t as efficient as on my day of arrival so we just waited on the side of the road for over an hour. Which was not a problem at all since we were accompanied by all these sassy monkeys who I tried to get on camera. 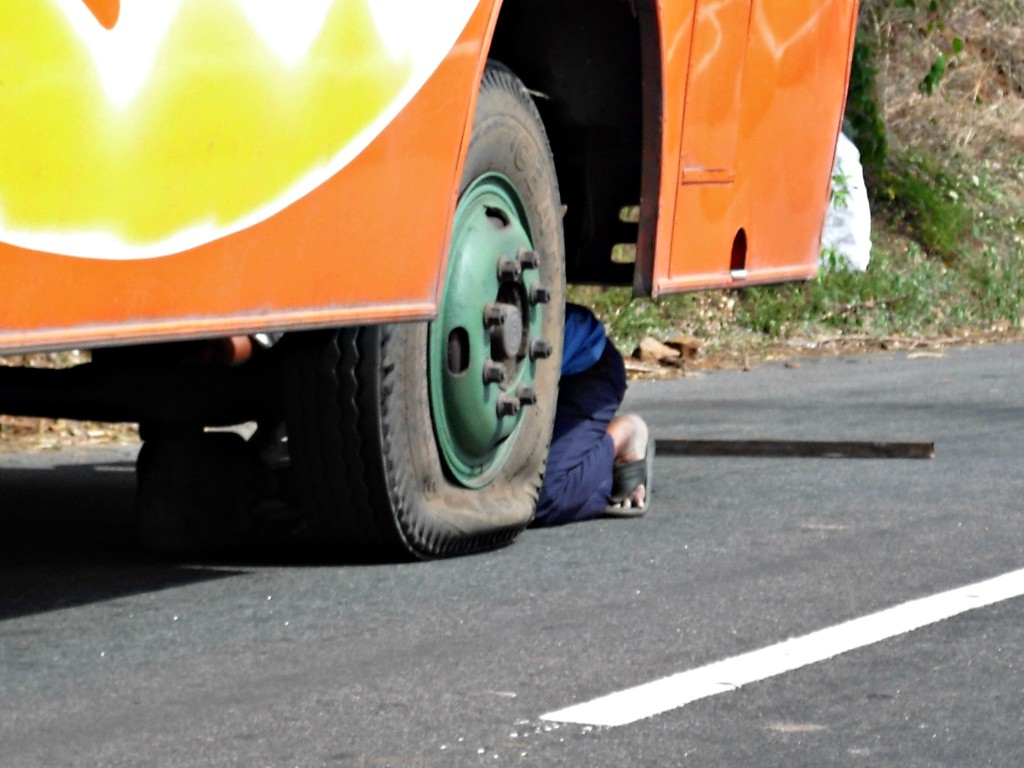 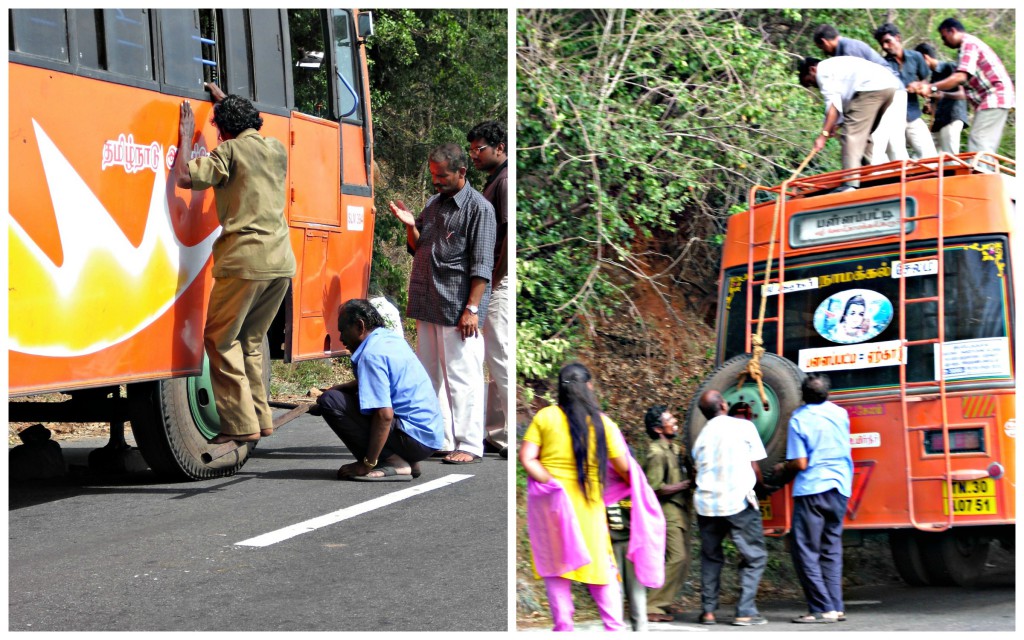 When we arrived in Salem at 4:45pm we almost immediately got on a bus which would take us to Villupuram in only 4 hours. Another not so comfy local bus (well it only cost 50 Rs.), so when we got off at Villupuram at 9pm we were pretty exhausted. From there it was yet another bus to Pondicherry, where we finally arrived at 11pm or so. The hotel we had picked from the Lonely Planet turned out to be twice as expensive so we figured we’d find another place to stay. Okay, walking around an unknown steaming hot Indian city in the middle of the night with your backpack on while having breathing issues is not the best way to end a long travel day… But luckily we found an amazing hotel: the French Villa. And yes, it really is a French villa. The rooms are spacious and light, with AC, a comfy bed, and a regular shower and toilet. It really feels like we’re actually staying in the French countryside!

So, today is our first day in Pondicherry and we’re about to go on a halfday sightseeing tour. Yes, this usually is pretty lame, but after the day we had yesterday it feels pretty good to just hop from sight to sight with the same bus instead of negotiating with multiple rickshaw drivers every stop we make. Tonight we’re meeting up with Josiane, who’s been in Pondicherry since saturday. Pondicherry is an old French colonial city which is situated on the Bay of Bengal. Everywhere you go there is French food which is so very welcome after 3 weeks of rice and spicy veggies! Another great Pondicherry fun fact: there are no taxes on alcohol which means a 650 ml bottle of Kingfisher beer is only 60 Rs. Yay! So yeah, I guess we’ll hang back here for a while… :)