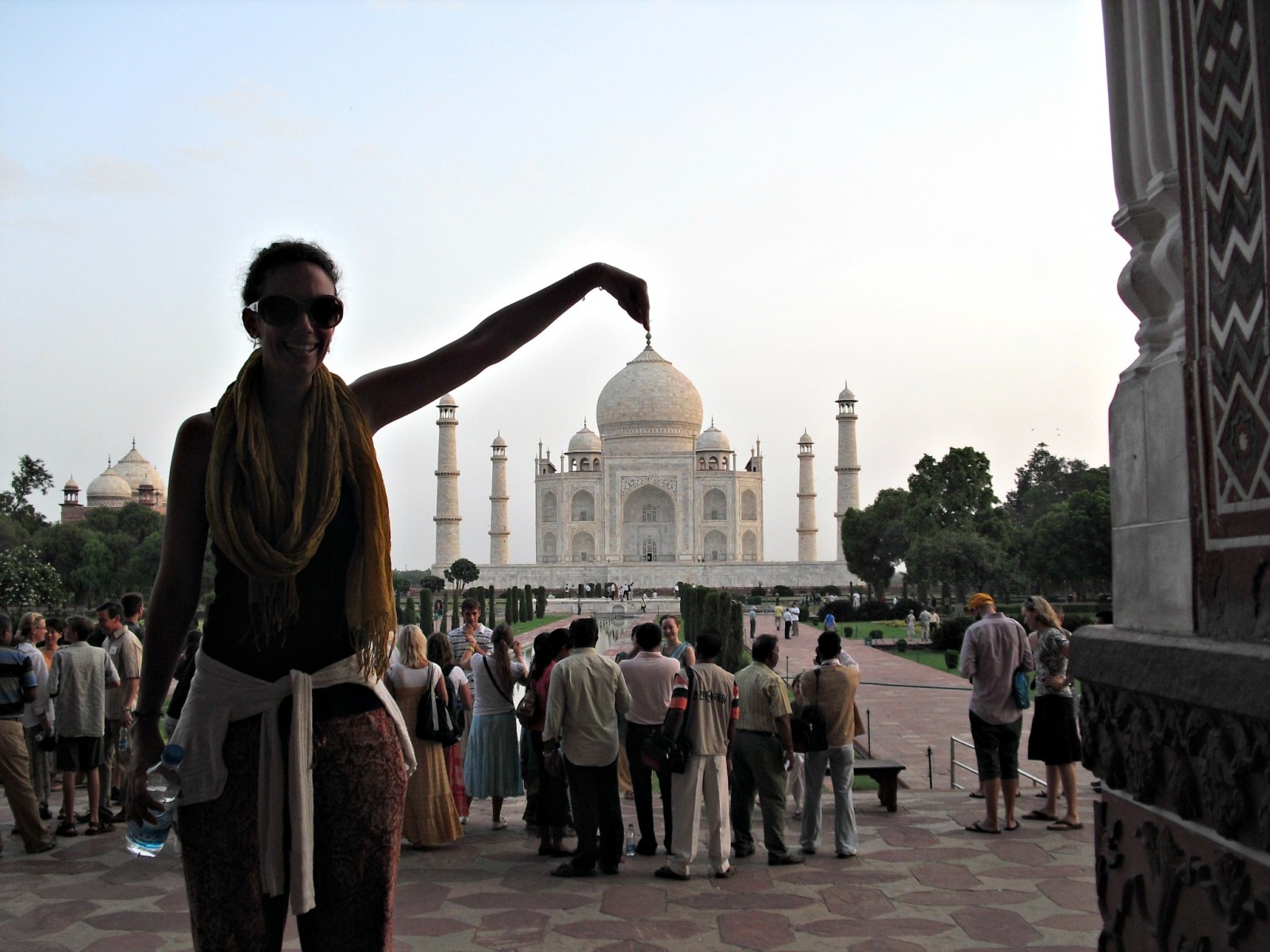 When we arrived in Delhi we got in a cab and drove directly to the hotel we’d picked out earlier. Since Delhi traffic is completely crazy (even more crazy than the rest of India) this seemed like a good idea. Unfortunately, all the more affordable rooms in the hotel were booked. Or at least, that’s what they told us as a trick to get us to go for a more expensive room. After long negotiations and the threat of going to another hotel down the street they somehow had a room within our price range. Don’t let them Indians fool you people! :) It is the best hotel we’ve had so far so I’m not complaining. 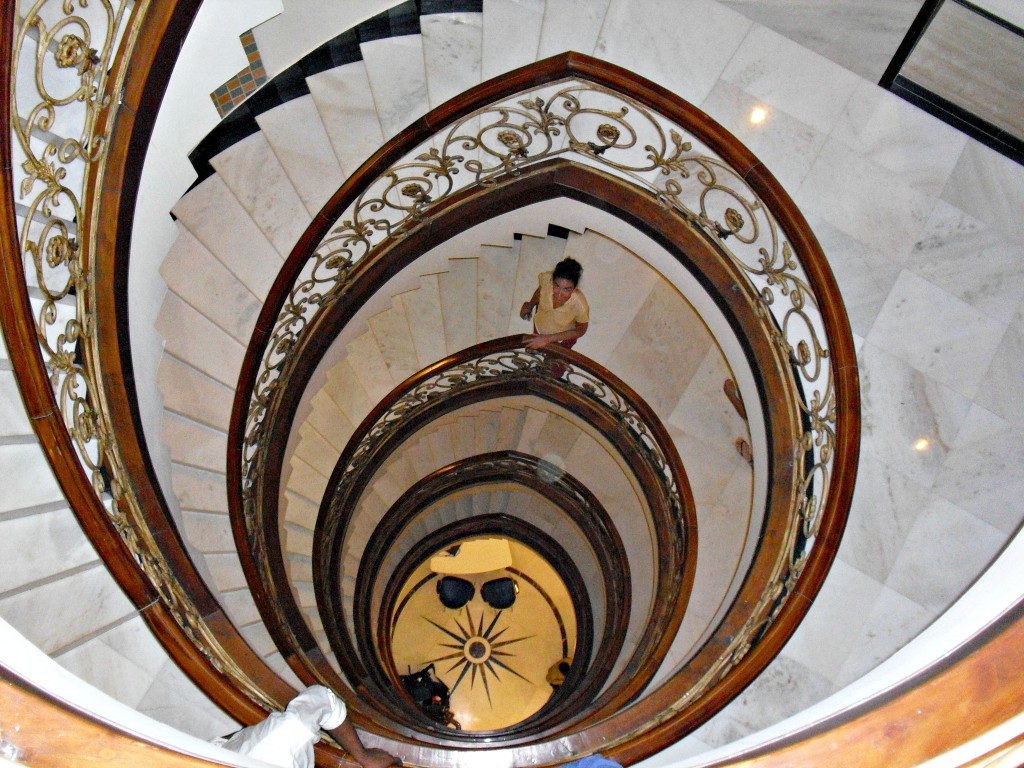 The hotel also has a travel desk where we went to get some info for the rest of our trip. And of course our original plan was completely overthrown (again) by the friendly fella behind the desk. But now we have more possibilities since we have booked a private driver for 9 days, who drove us to Agra and who’s now touring us around Rajasthan province. Here we’ll visit Jaipur, Pushkar, Udaipur and Jodhpur, from where we’ll take a (24hr!) train to Varanasi, the holy city at the Ganges River. After three days we’ll fly to Mumbai, our final destination in India. So it’s pretty nice that we’ve arranged all our transportation and hotels till Mumbai. In a sense we just bought time and efficiency. Of course for Indian standards we paid a lot of money, but for Dutch standards I think we’ve got ourselves a pretty sweet deal.

Delhi was a bit of a let down to be honest. I guess you have to stay there longer to really get to know the city and be comfortable with it. The travel desk provided us with a guide/driver for our stay in Delhi who showed us around all the important sights. Since we were only there for a few days this was a good way to see a lot in a short amount of time. At the end of the day we walked around Connaught Place which is surrounded by all these once upon a time beautiful buildings who now look run down. Next year Delhi is hosting the Commonwealth Games and the city is trying to show the best version of itself, but I think they have a long, long way to go…

Being in India is not without risks, especially if you already suffer from IBS (irritable bowel syndrome) and enjoy local cuisine a lot… Yeah, I got sick. Real sick. So I was very happy with our nice hotel where I could stay in bed all day, watching Tom & Jerry and eating some familiar Western (not spicy) food. The next day I was still feeling a bit weak but adventure waits for no one so we got in the car with our little driver (yes, he’s tiny) and we got on the road to Agra. We made a stop at the Mausoleum of Mughal Emperor Akbar which was very impressive. 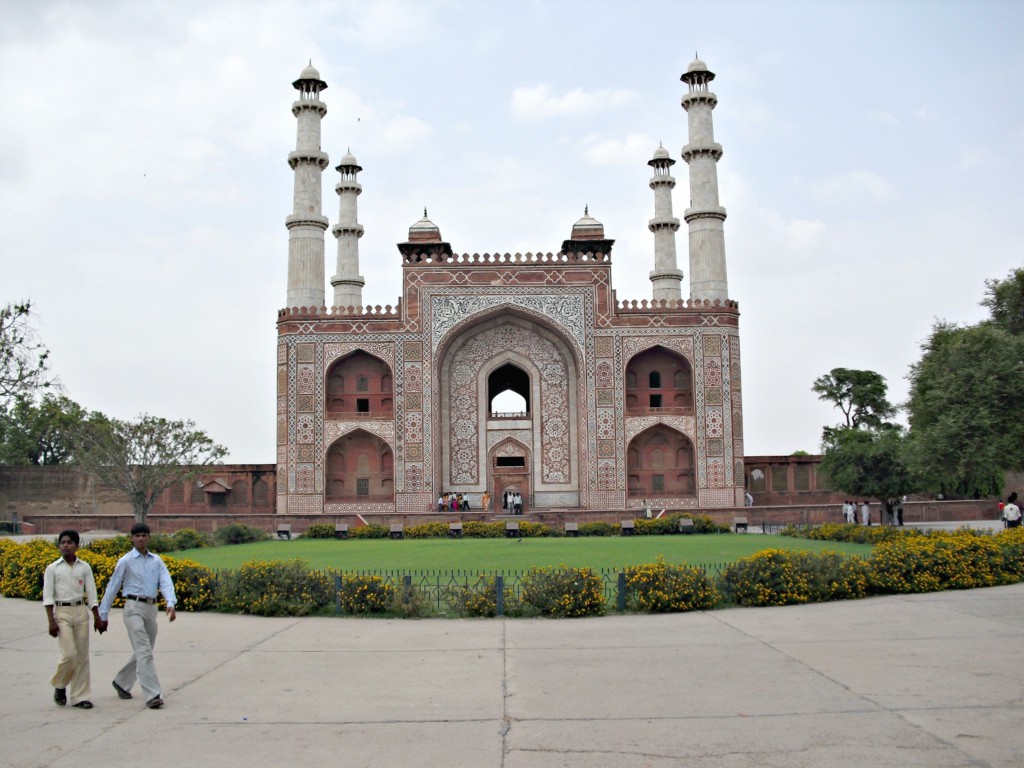 In Agra we checked in a decent hotel across a McDonalds. After all those weeks in India this was the first one I encountered so of course I had to go for an Indian MacDo experience! After this lovely lunch the little driver took us to Agra Fort which is neglected by most visitor to Agra since they’re only interested in the fort’s across the street neighbour: the Taj Mahal. So if you plan on visiting Agra, please do go to the fort, it’s so beautiful and you will not regret it. 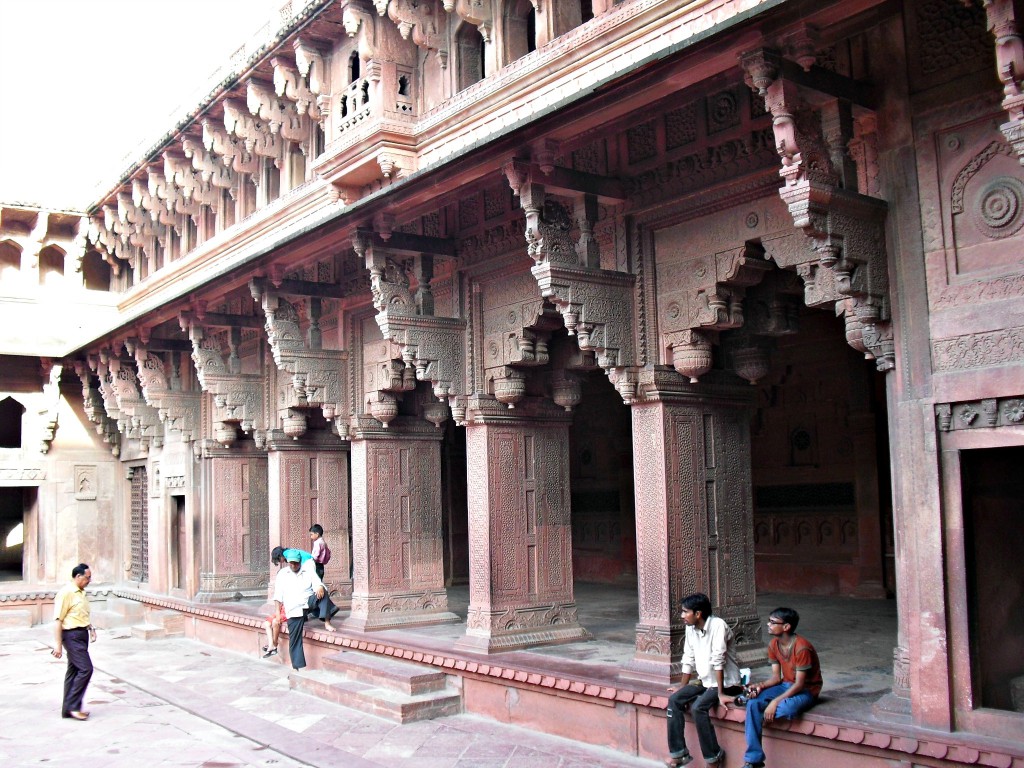 The next morning the alarm went off at 5:00am since we wanted to be at the Taj before sunrise. And I’m so glad we did because it was soooo gorgeous to see the blue-ish night light turn into a deep orange color on the Taj Mahal. And yes, I have my Diana picture! Unfortunately, I forgot to put my scarf over my head – stupid, stupid. It’s also super hilarious to watch all those people taking pictures of the same spots (and of course we did exactly the same). 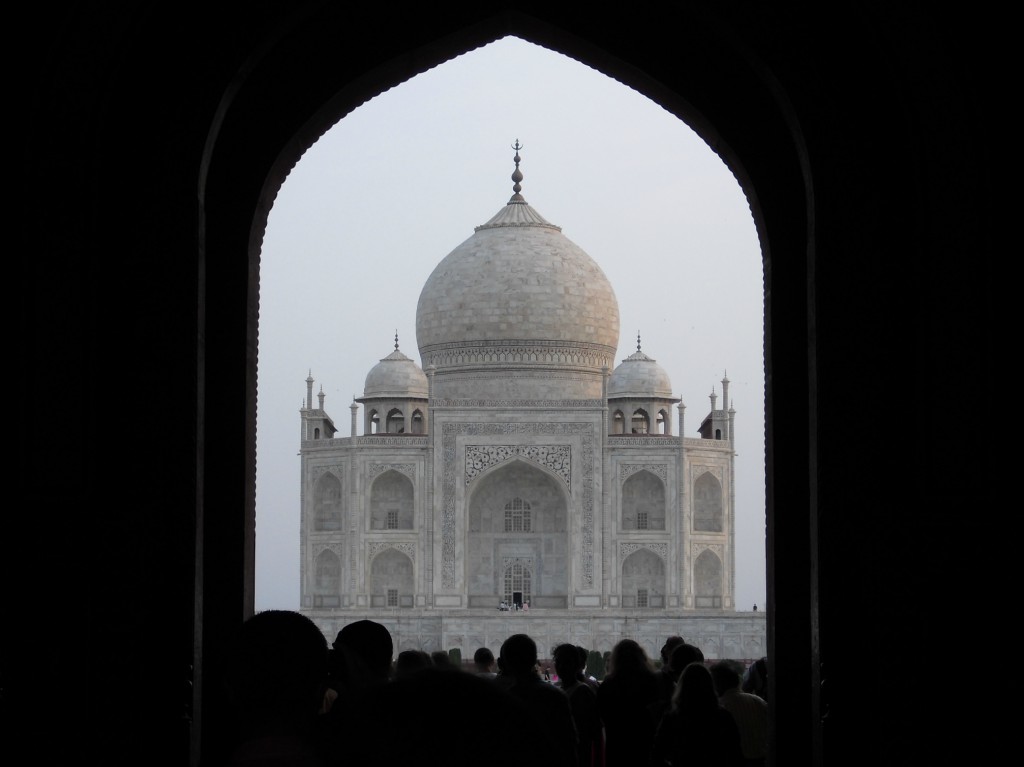 After the visit to this beautiful Wonder of the World we got back on the road with Jaipur as our destination. On our way there we stopped at Fatehpur Skikri, a deserted ghost town. Akbar built this fort as an example of the perfect city, but after his death it was completely abandoned since there were serious water shortages. After we arrived in Jaipur little driver dropped us off at the Om Tower Hotel which sort of lookes like a space shuttle (gone wrong). At the top of the hotel there is a revolving restaurant – with the most disgusting ánd overpriced food by the way. Stay away from the revolving restaurant!

Our little driver is super nice and funny but he is of course Indian so he has all those nice “friends” with lovely little “very cheap” shops. Even though we appreciated to see how Indian marble tables are decorated by hand, we were definitely NOT planning on bringing those massive things home with us. I have to say that it’s pretty smart of little driver that he has a friend in each city who sells the local specialty. Jaipur is the city of textiles and precious gems. Okay, so I bought a scarf and leather sandals in shop 1, and beatiful jewelry in shop 2. I bought earrings and a necklace with Indian Black Stone which is a gem found in Rajasthan. It’s also known as Indian Star since you can see a little star/cross if you hold the gems to the light. Could be worse! At least I supported local economy, right?

Jaipur is very nice and beautiful city with many highlights. Amber Fort is highly recommended (especially the audio tour!). And of course I couldn’t resist to go up there on the back of an elephant. When we got to Jaigarh Fort they were shooting a “very famous” Bollywood movie, which was pretty funny to see. Another cool place to visit is the Jantar Mantar Observatory, where in the 18th century they could tell time with two seconds precision. We also visisited the Maharaja’s Palace (he was not home…) and the Hawa Mahal, also known as the Palace of the Winds. Back in the days women at court were not allowed to go outside so they sat behind the windows at the Hawa Mahal to enjoy fresh air.

Tomorrow we’re off to Pushkar, a city that’s on the edge of the desert, so I’m thinking: camel ride! I hope you enjoyed this update and will keep a lookout for the next one :).