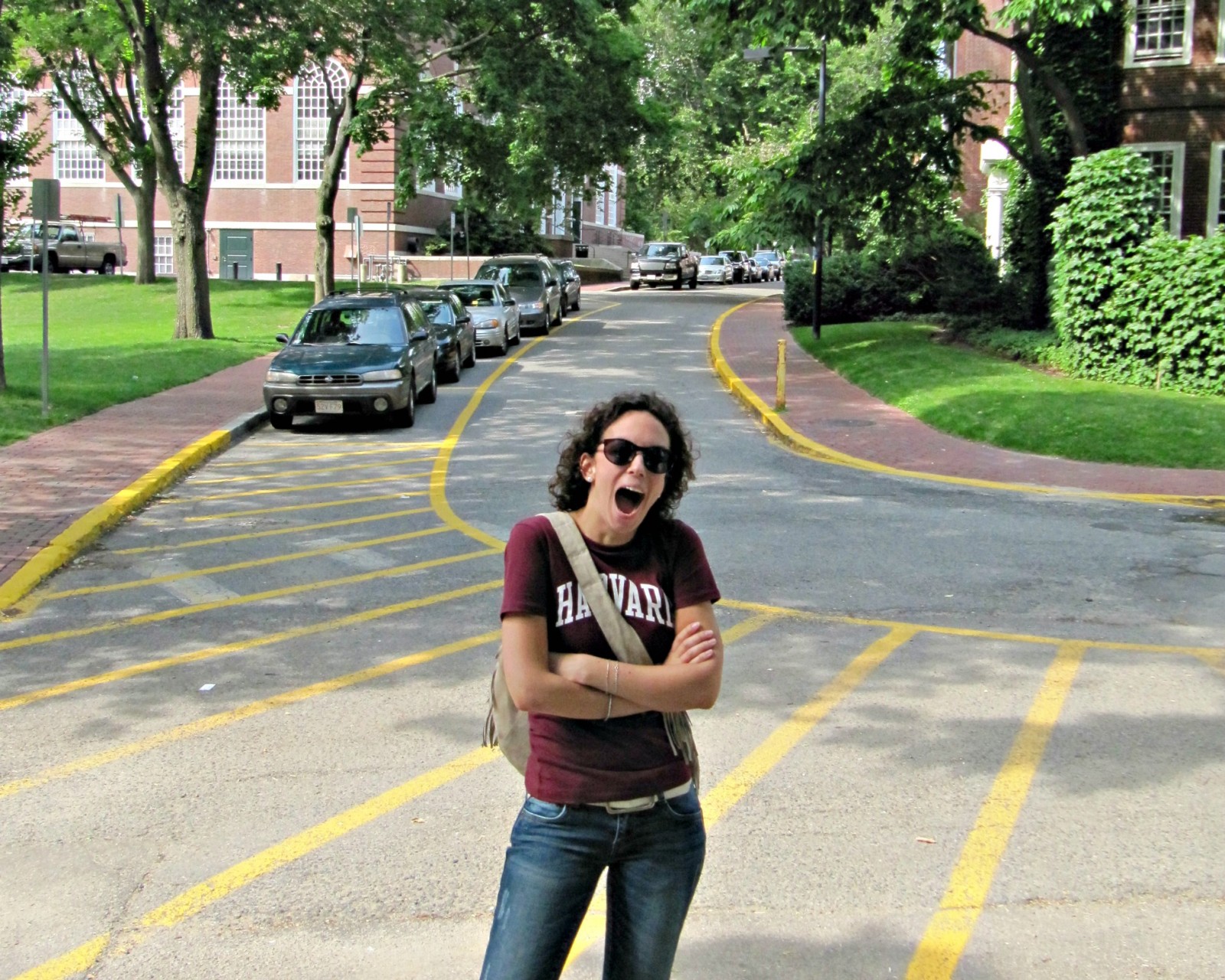 Concrete jungle where dreams are made of – Alicia Keys & Jay-Z

I made it!! As we speak I’m sitting in the open window of my Harvard dorm room looking out on the beautiful lawn in front of our house. Life is good.

Okay, let’s go back to the start. Even though the journey over here was fine, there were a few setbacks that I think y’all appreciate to hear. So my flight from Brussels to New York was delayed (obstacle 1). And the most annoying thing was that we were allready on the plane and they repeated the Delta Airlines security video over and over and over… Yeah, I got it, exit to my left. The flight was not bad since I had two lovely gentleman from Belgium as my neighbours who were willing to share their Mentos, and I watched almost 4 movies. My strategy to stay awake all night on thursday so I would be extra tire on the plane didn’t really work out as planned, and I was way too excited to go to sleep. YAY USA!!!

When we approached JFK airport and I saw NYC getting closer and closer I was almost jumping up and down my seat like a little kid…Obstacle 2 was getting through customs. When I came to New York with my dad and brother a few years back I almost didn’t get access to the US of A since the customs officials weren’t convinced that it was me on that passport photo (yes, I’d taken a nap during and the flight, and yes, my curly hair was going crazy). Last year in India I got laughed in the face because two Indian ladies thought I had a strong resemblance with MJ (yes, as in Michael Jackson). And this time around the US customs official also checked my photo multiple times and I could tell he had some doubts, especially when my fingerprints weren’t connceting to the system at first… Fun times. The train from JFK to Penn Station went pretty smooth, so that was nice. And it was such an amazing moment when you’re on the train making your way to Manhattan through the NYC suburbs while Jay-Z and Alicia Keys are blasting in your ears hommaging this awesome city… “Now you’re in New Yoooooork. Concrete jungle where dreams are made of. There’s nothing you can’t dooooo”. NICE…

Of course obstacle 3 soon made its appearance… The plan was to take a bus to Boston from Penn Station. Easier said than done since Penn Station is HUGE! Even though I used my Indian strategy – asking as many people as you can for directions, and go with the most given answer – I was sent the wrong way, to 42nd street. Oh, I almost forgot to mention that it was around 30 degrees and I’m carrying this crrrrazy big trunk of a suitcase. When I got to 42nd street they told me, oh yes, that I had to get back to Penn Station for the buses to Boston. Sigh… In the end, it was around 4pm, I found the Bolt Bus stand. Yay! Or maybe not… Because I didn’t purchased a ticket online I had to wait in the standby line… I just made the best of it, you’re standing in the middle of beautiful Manhattan after all, and I did some people watching. I got on the 5.30pm bus and I arrived at Boston around 10.30pm where two backpackers asked me for directions, LOL. I know, pretty lame to ask the one person that is carrying the biggest suitcase in the world for directions, but fortunately I knew where they had to go because I came prepared and I am going to rock this town ;). When I finally got to my hostel I’d been up for over 24 hours, so I took a quick shower and fell right asleep in the crazy hot shared dorm room.

This morning I got up pretty early to watch the game. I’d started off nice when I realized I got confused in the time difference so I was an hour late and I could only watch online. So I thought I’d bring my laptop to the breakfast area and have some food while watching the game. So I walk in that room and there is a HUGE TV broadcasting – that’s right – NED-JAP. Pretty stupid I hadn’t thought of that earlier. It was really hilarious since the room was filled with Americans who all commented on the game and they predicted that the Dutchies have a serious chance to win the title. Too bad they couldn’t figure out that my orange outfit had a reason and that I usually don’t wrap an orange scarf around my head.

I reside in Winthrop House (same house as John F. Kennedy…) where I share an apartment with two other girls. One of them is from Australia and the other one has yet to arrive. We share a large living room and a bathroom but we have our own bedrooms. Upon arrival there was this Harvard welcome pack so I’m already provided with some official Harvard merchandise (a blanket, a water bottle, a key cord, a notebook and of course, a pen). My fellow-Dutchie and I are going for a stroll around campus in a minute, and we also have to pick up our Harvard ID-cards because you’ll need those to access the various buildings.

So far everything is awesome! I know it sounds like a lame cliché, but it seriously is so special to be here. It really is a dream come true. The next 7 weeks I’m actually living on the Harvard campus, in the same house as JFK when he attended Harvard. How cool is that?!