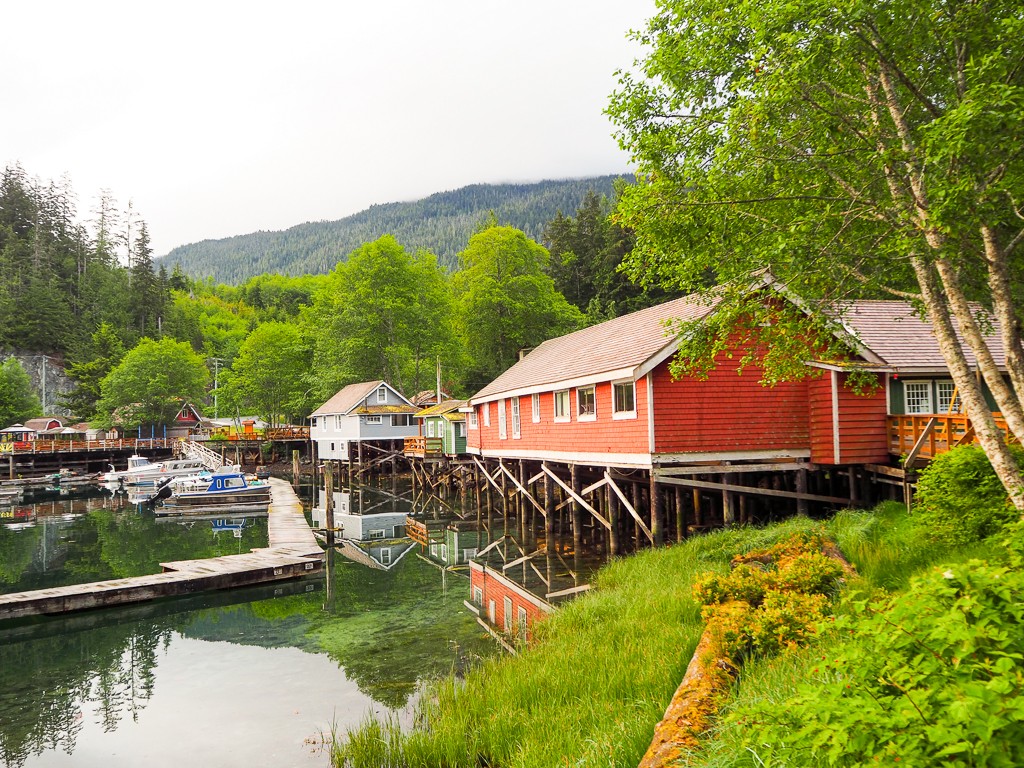 A while back I showed you all about our amazing grizzly bears experience in the Canadian wilderness (read more here). We drove all the way up North to Telegraph Cove on Vancouver Island, which is an absolutely amazing road trip through gorgeous woodlands and beautiful scenery. 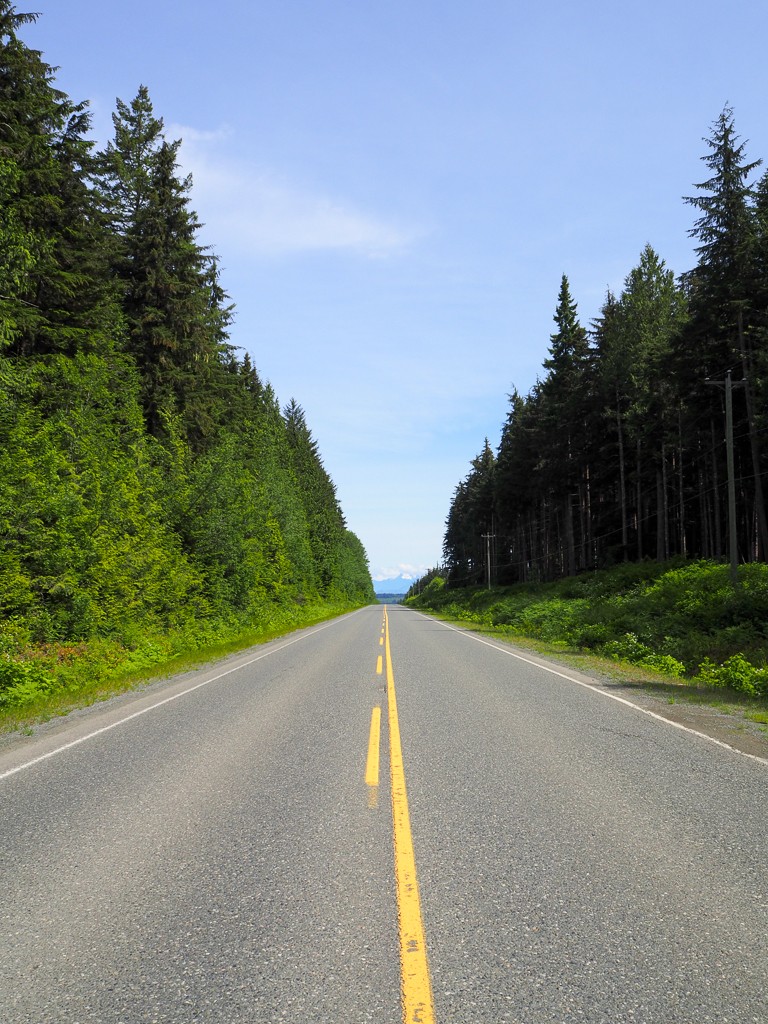 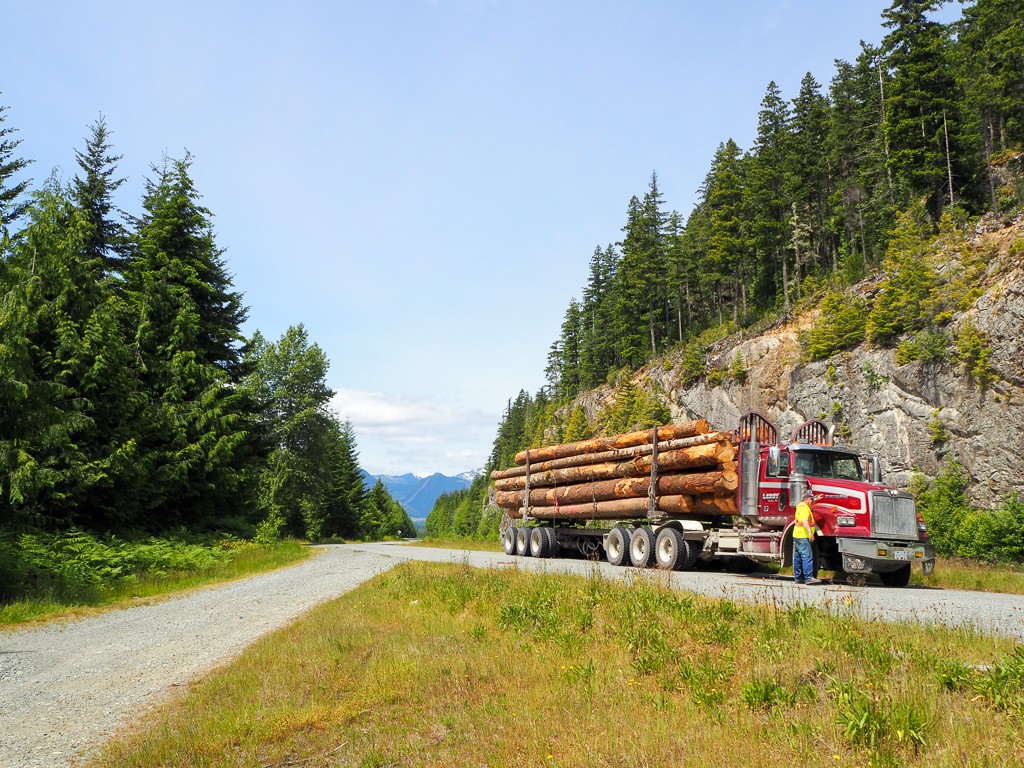 We ended up at the tiny seaside town called Telegraph Cove from where we would go on our grizzly bear trip. But as it turns out Telegraph Cove is such a wonderful little town that even if you don’t go on a bears trip (which would be a TERRIBLE mistake) it’s still worth the long drive. It’s so beautiful and I completely agree with the tourism board’s slogan:

“One of the best wonders in all of Canada.” 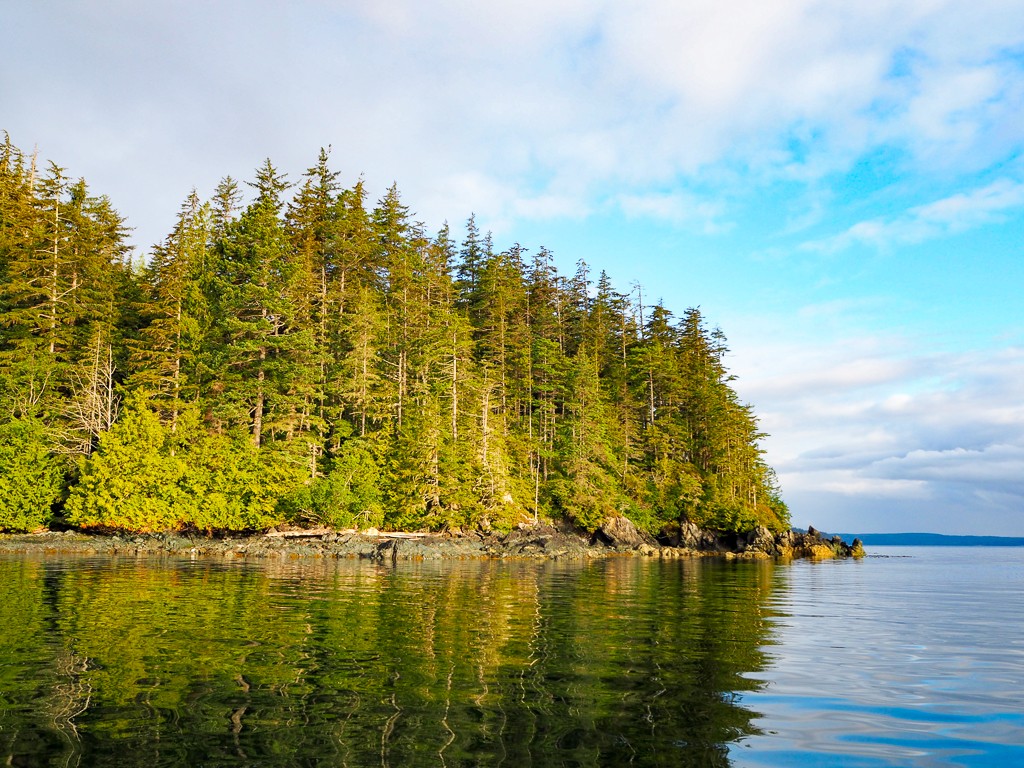 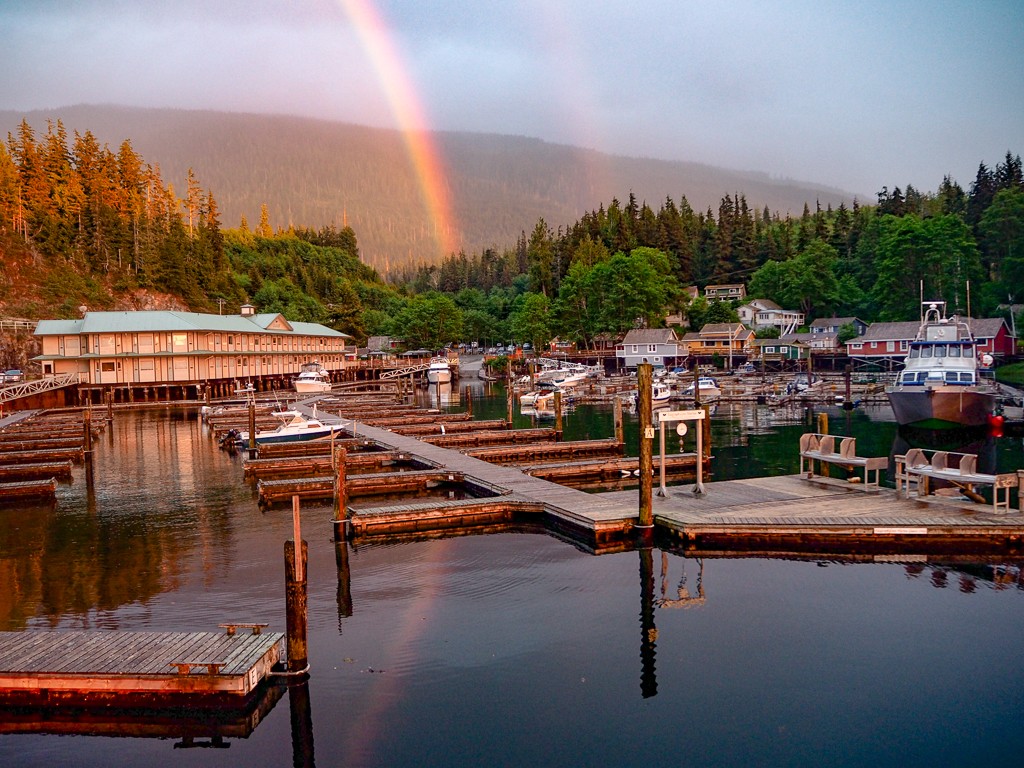 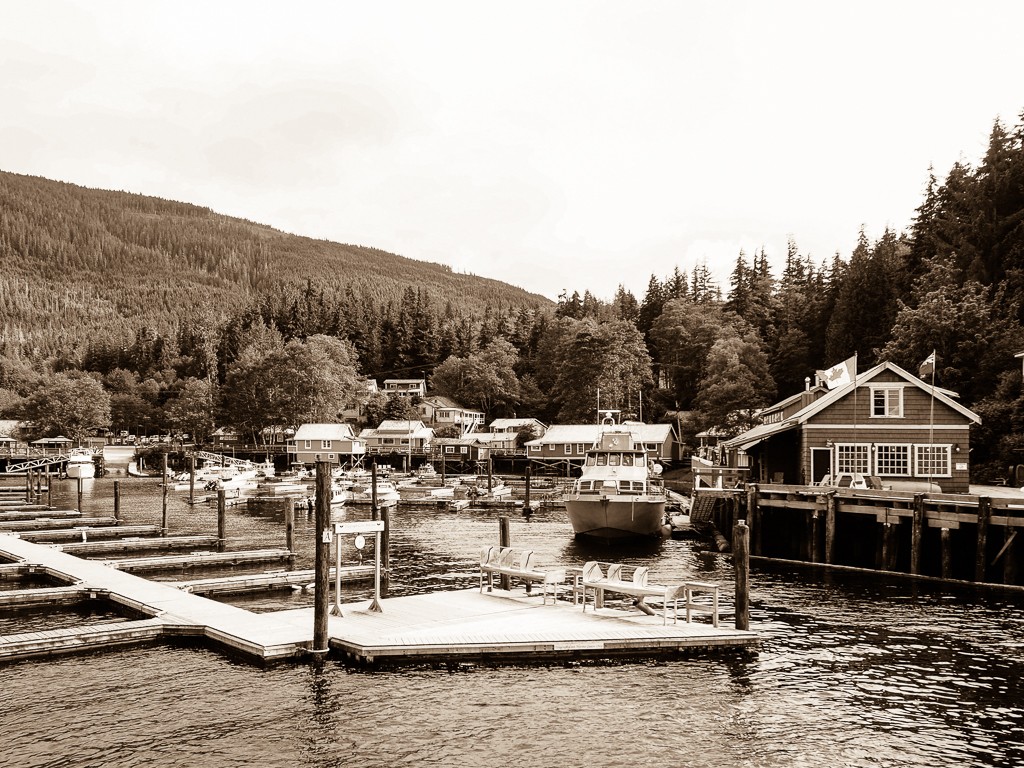 But don’t just take their word for it. Telegraph Cove is actually voted one of the best 10 towns in Canada by travel writers. So what’s so special about this place, you ask? Well first of all, it is completely built over water. Which means you can only access the buildings from the boardwalk that runs through the entire town. And when I say “buildings”, I mean the lovely heritage buildings. And when I say “entire town”, I mean the cutest little seaside community ever. It is so very tiny its population is around 20, although numbers tend to climb in the summer when seasonal residents and workers come to town. The surroundings are super gorgeous and its location is one of the last virtually untouched areas of North America. Word. 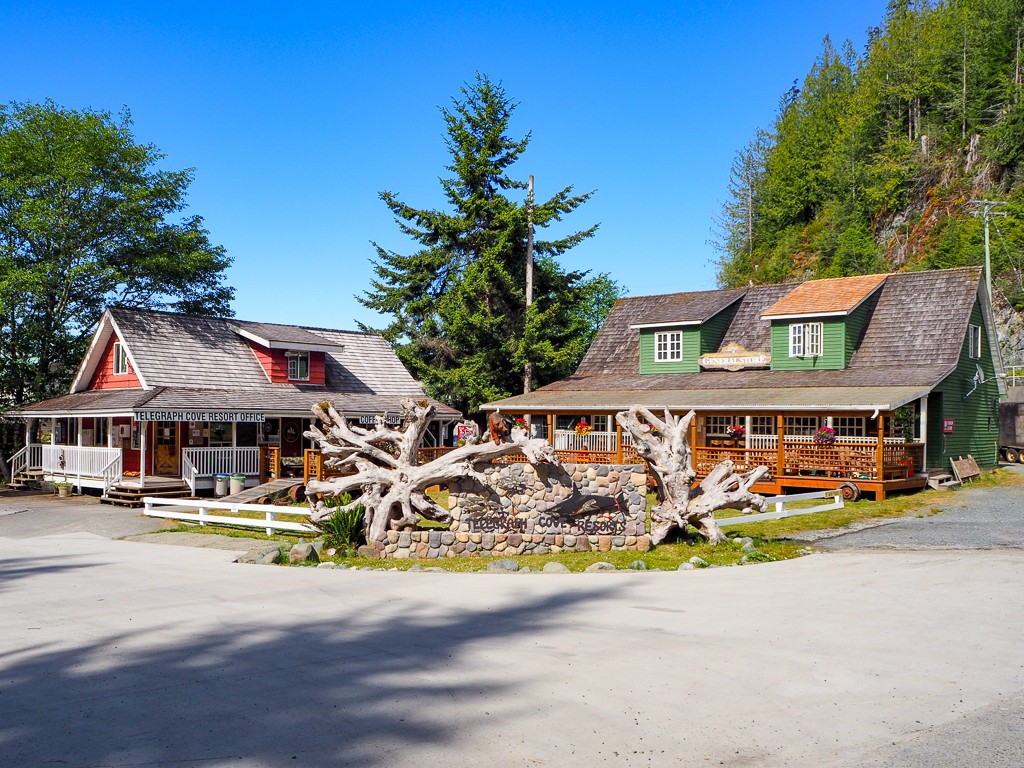 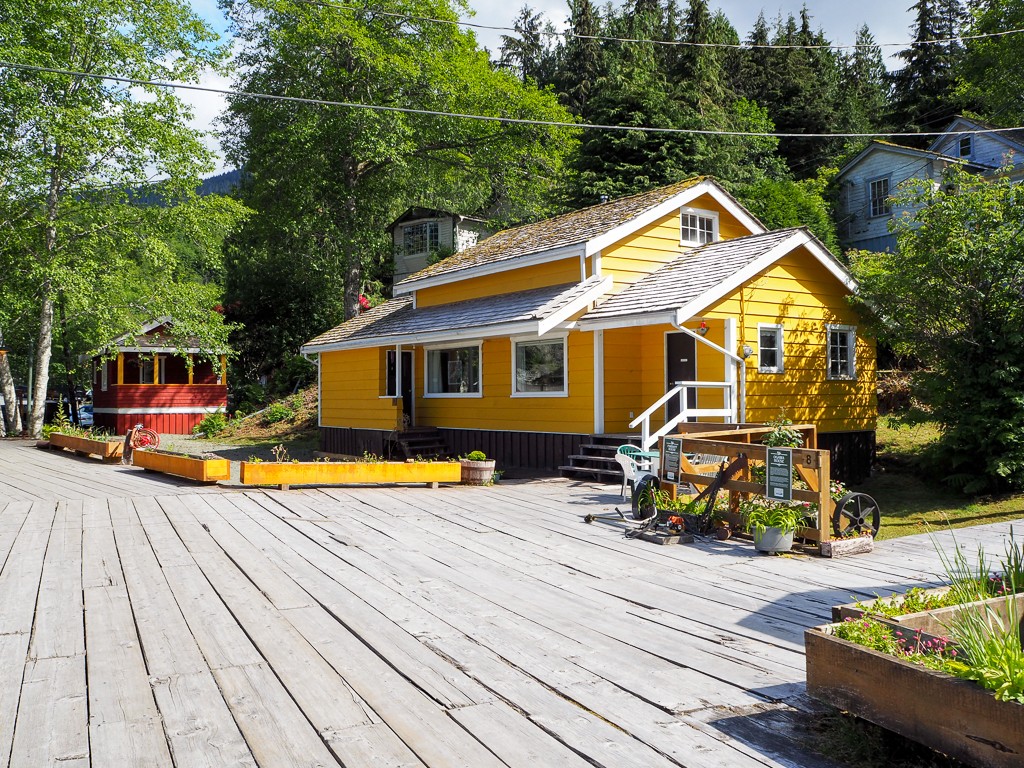 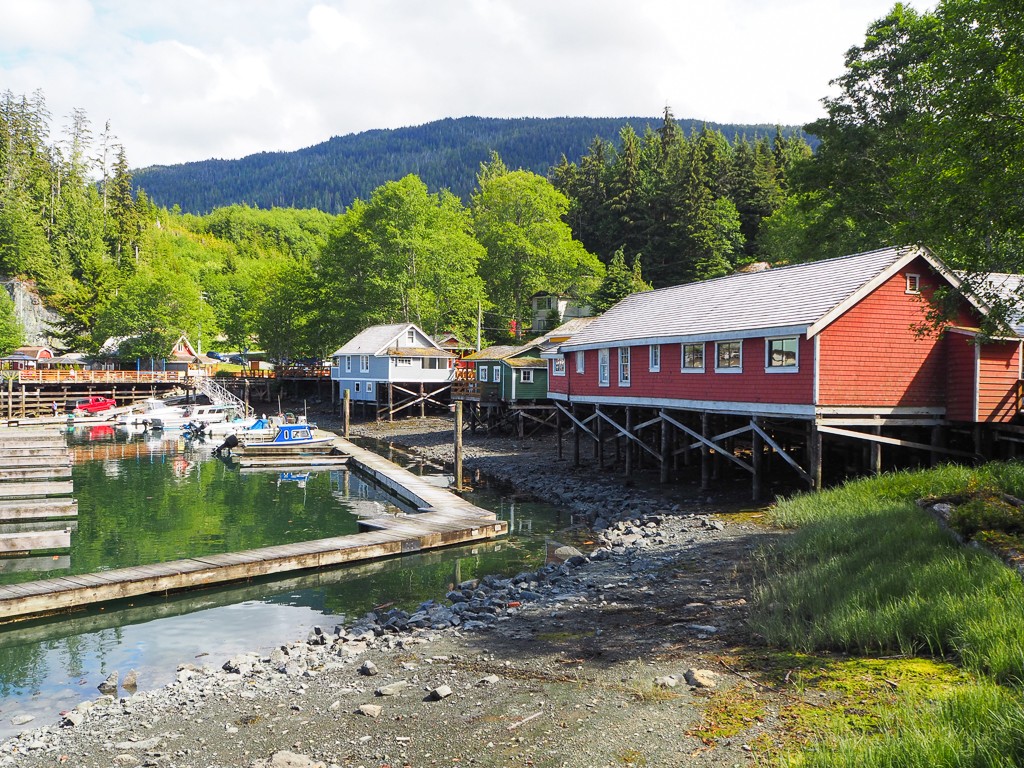 Check out this amazing video (credits to Klaus Gretzmacher) to get an idea of how much it’s worth it to drive all the way out there.

What’s In A Name

Telegraph Cove’s history goes back many, many centuries, ever since First Nation bands migrated to the area over 9000 years ago. In the early 20th century the town started to flourish as a lumber mill and fishing village. And in 1912 the town got its name when a telegraph company was looking to set up a telegraph station on Northern Vancouver Island. A telegraph station in a cove. Bam. The tiny seaside community was now named Telegraph Cove. Easy does it. 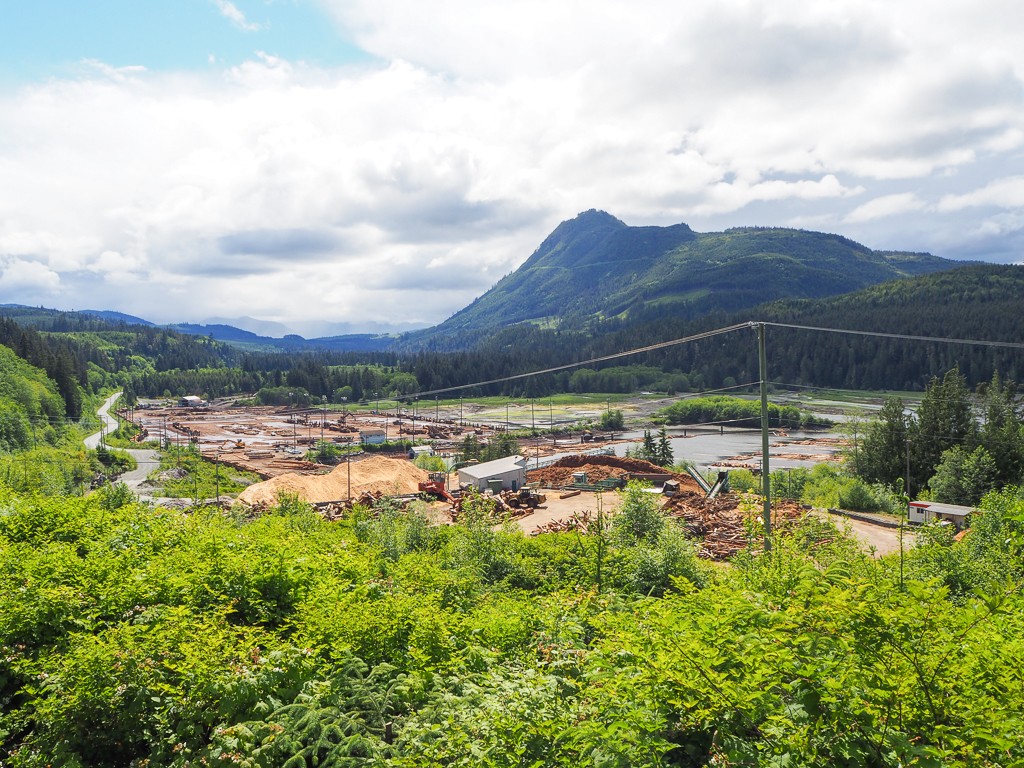 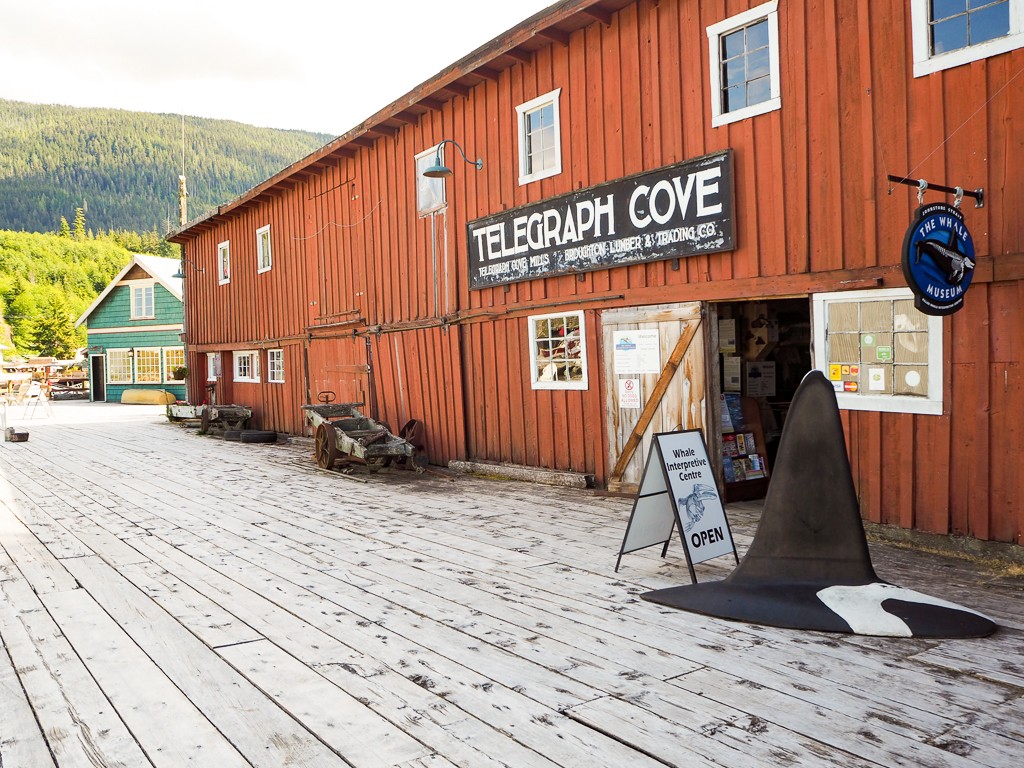 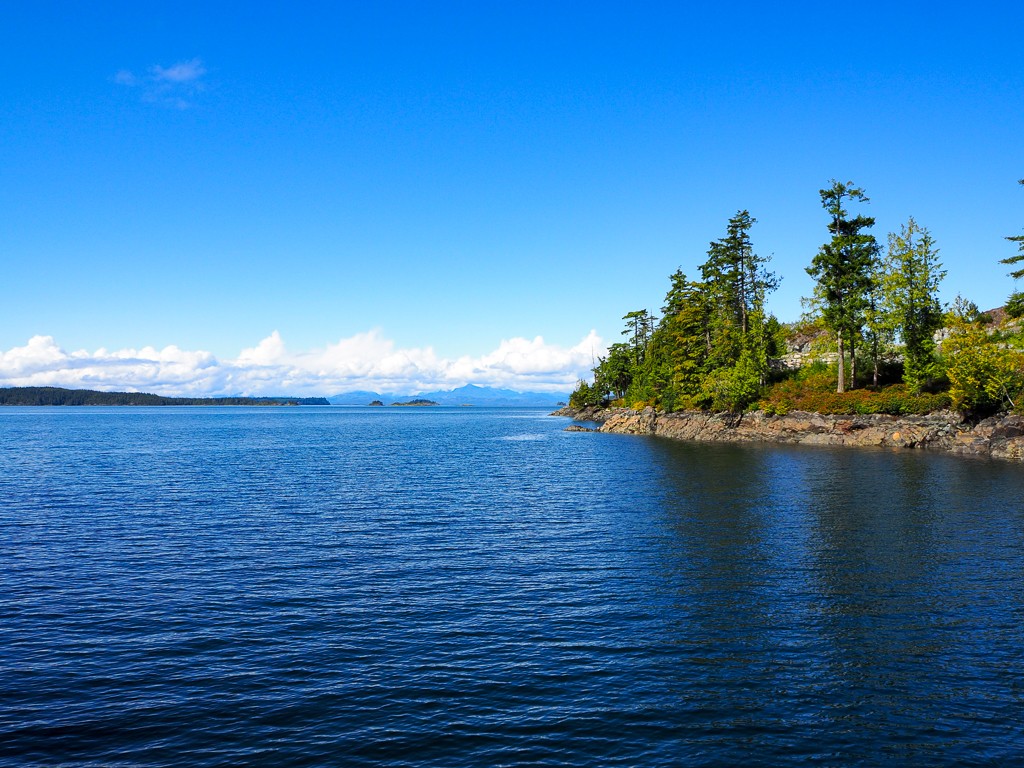 Fun fact: until 1956 Telegraph Cove was only accessible by boat. In the following years tourism slowly started to thrive as a result of better accessibility. And even though the launch of Stubbs Island Whale Watching (1980) and Tide Rip Tours (1998) have brought in many visitors, Telegraph Cove hasn’t lost its small town off the grid charm. 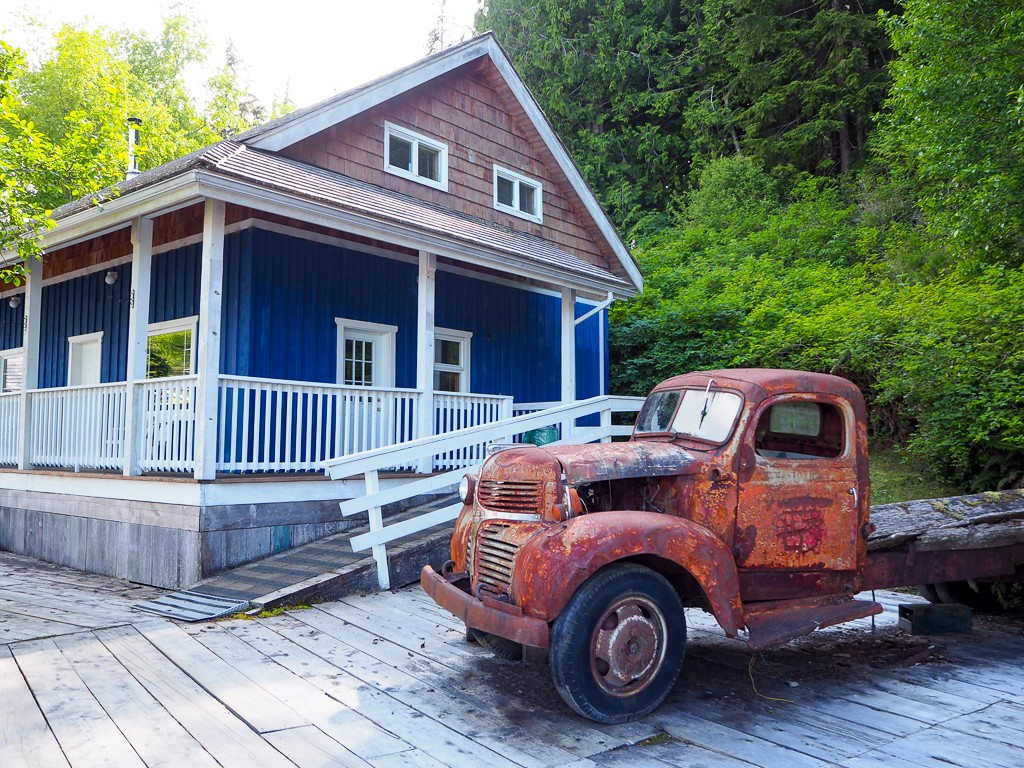 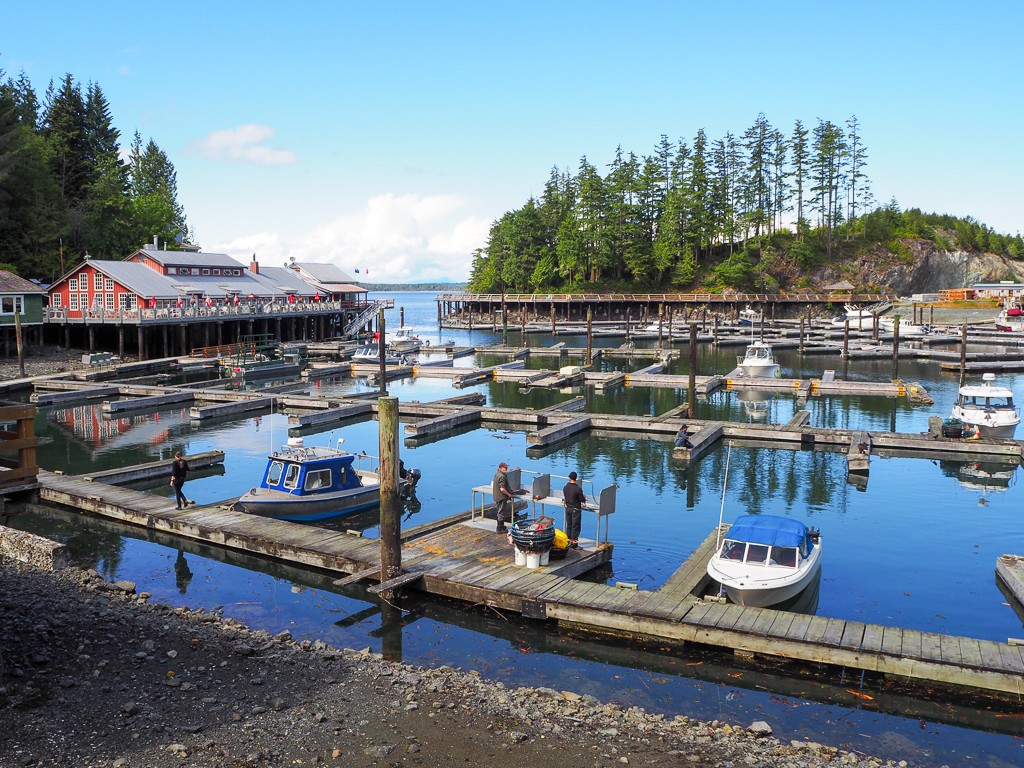 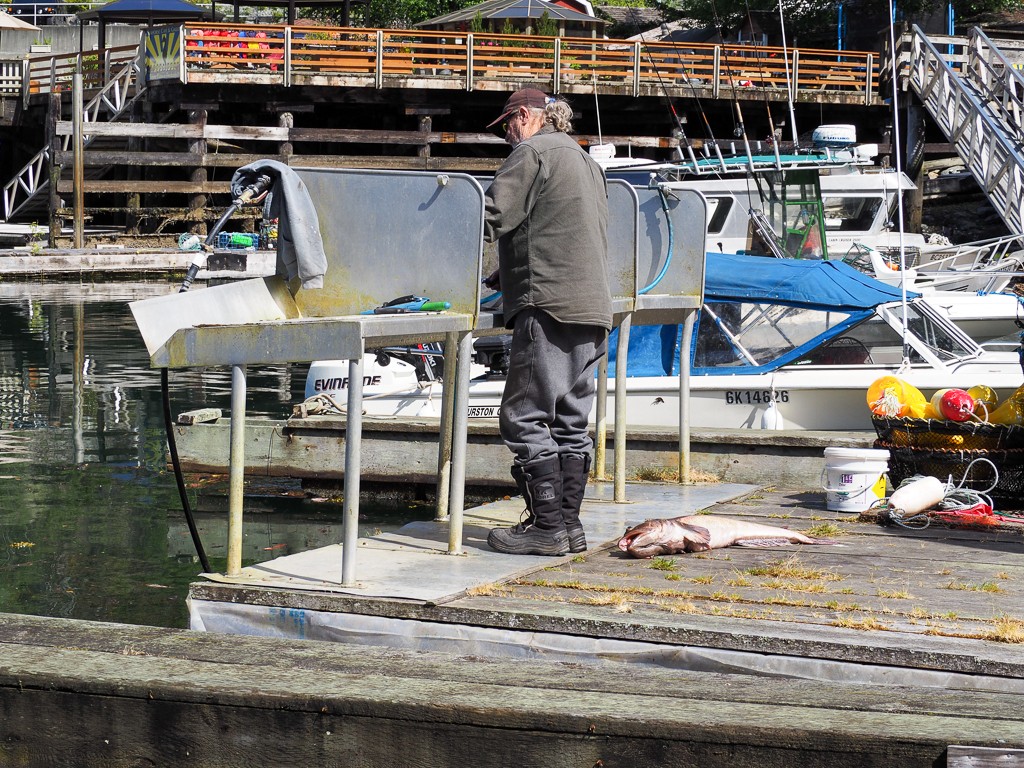 Not even 200 meters before we entered Telegraph Cove we spotted a black bear crossing the road. And right upon our arrival in town we spotted a pretty bad ass bird: the eagle. He was just minding his own business on the roof of one of the houses along the boardwalk and didn’t seem to mind that there was a handful of people photographing his every move. At some point he took off and grabbed one of the fish that a fisherman was about to clean on the harbor’s dock. I grabbed my zoom lens and slowly started to move in closer until I was only a few feet away, and I have to admit it was pretty awesome to see an eagle completely destroy a fish. 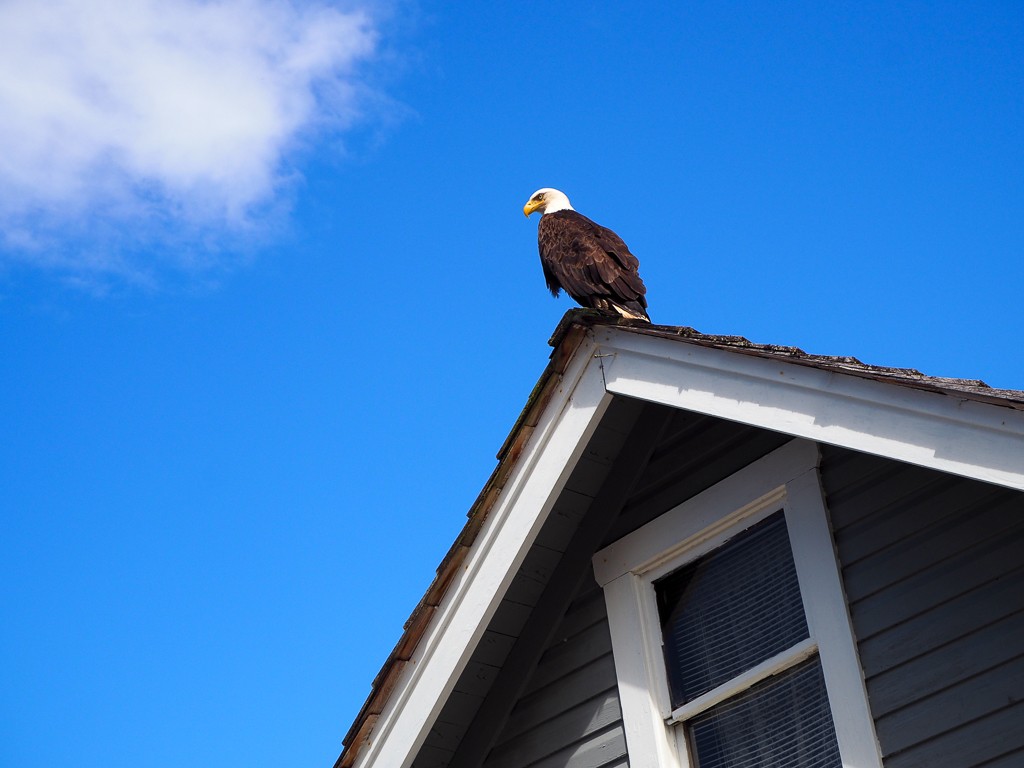 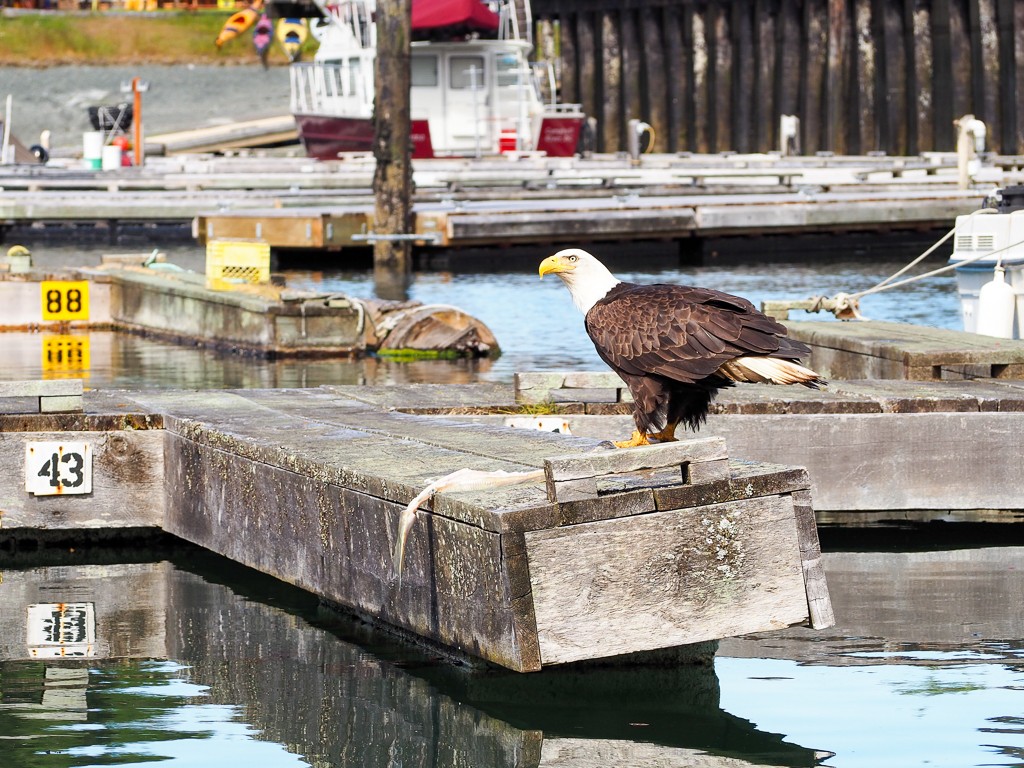 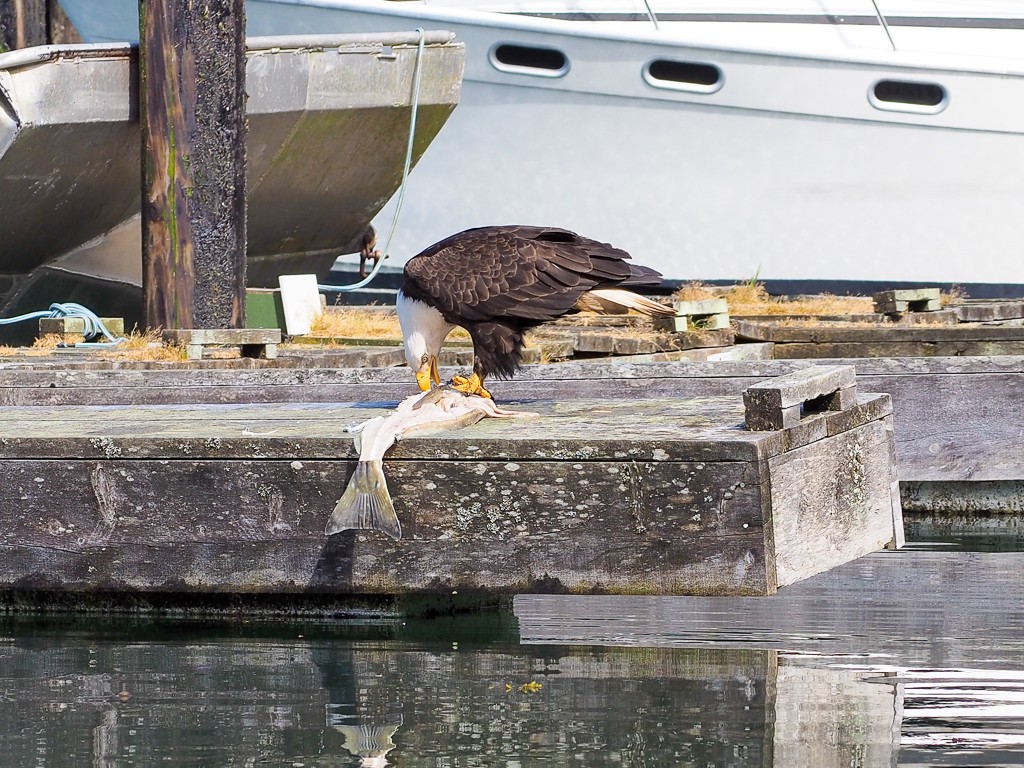 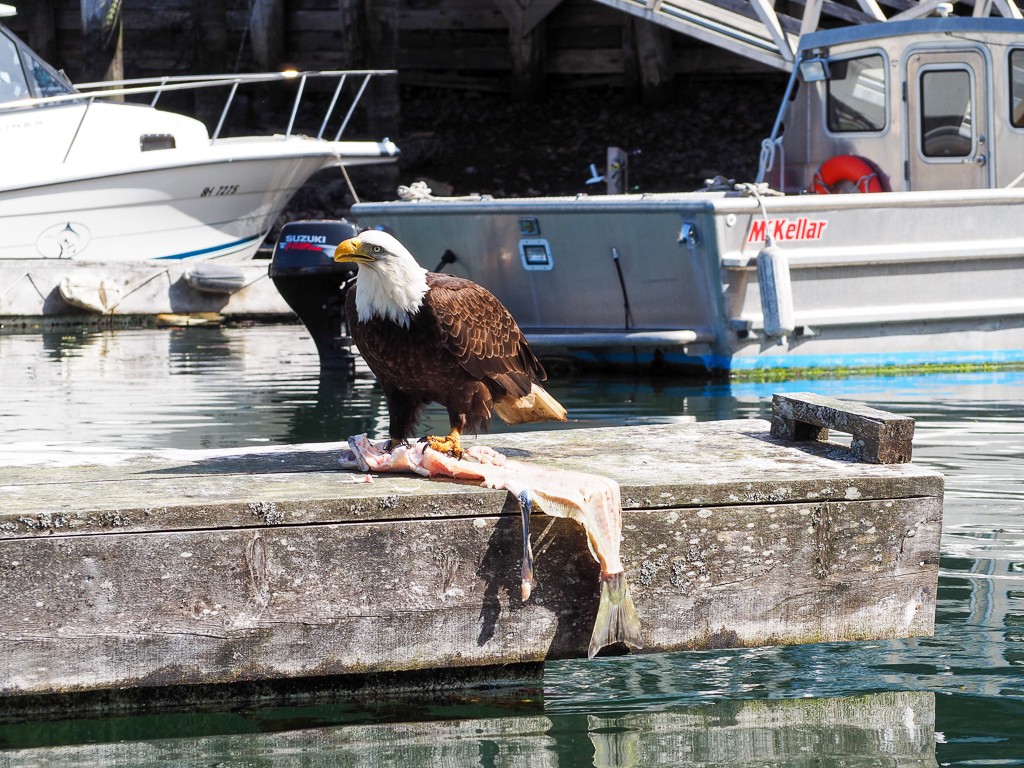 There are basically two options when it comes to accommodation in Telegraph Cove. There is either the Telegraph Cove Resort or the Telegraph Cove Marina. We decided to go with the marina since their rooms are fairly new and modern as opposed to the old cabins and lodges of the resort. Not that we would mind staying in one of those, but we figured it was better to stay in the not super pretty modern building and look out onto the old charming cabins than the other way around. We had a big ass room with a big ass window so we could watch the world go by along the Telegraph Cove boardwalk. 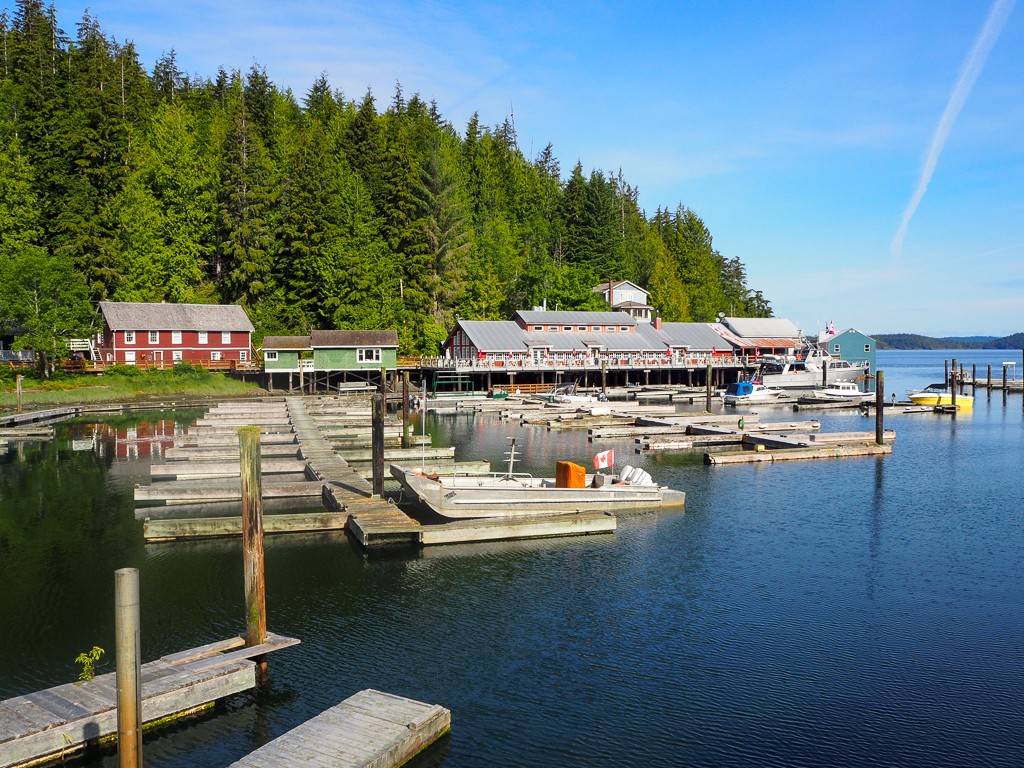 The main reason we came to Telegraph Cove was for the grizzly bear experience. The other big draw is a whale watching trip with Stubbs Whale Watching. Since we already did a whale tour in Victoria we opted out of it, especially since it was too early in the season to spot orcas. Usually the season starts in July and ends in October, but we were lucky enough to see a few orcas from the boat on our grizzly bear adventure. If you want to increase your chances of seeing both orcas and grizzlies I suggest you come out here late August or early September. Grizzly bear viewing is perfect around late May / early June because the bears just come out of hibernation and they are roaming around the meadows for food (often with their little ones). But at the end of August salmon starts to come back to the rivers so your chances of seeing bears are also very good around that time. 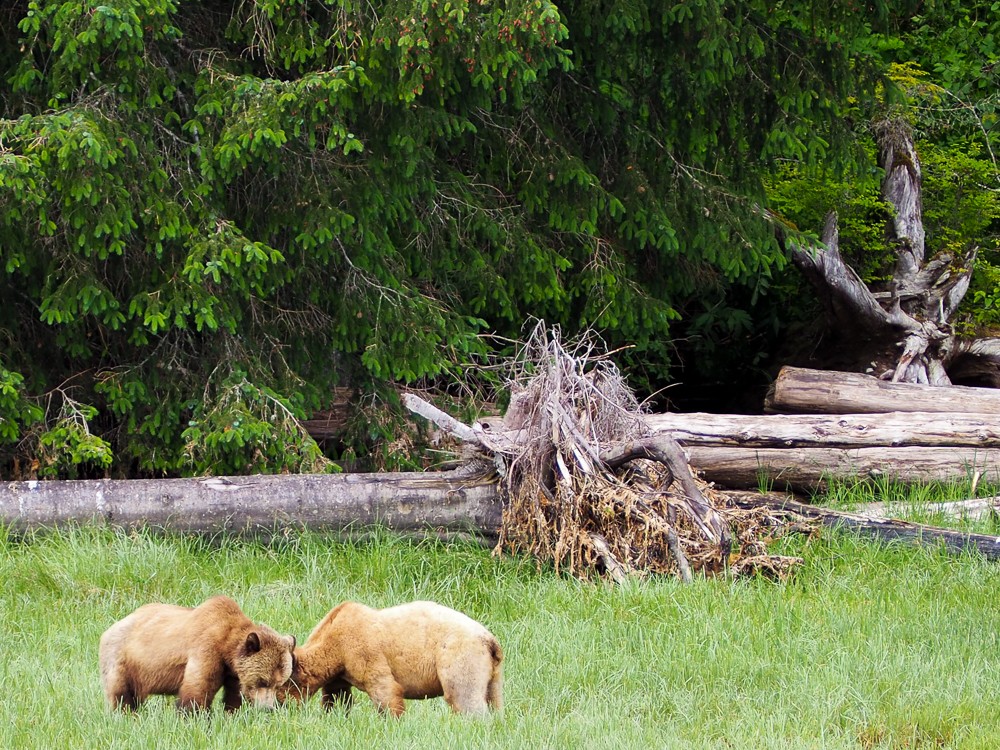 Don’t forget to visit the Whale Interpretive Center at the end of the Telegraph Cove boardwalk. It’s just a small museum but it’s filled with useful information about all sorts of whales (and has many whale skeletons!). They are currently working on the skeleton of orca T44, who was found dead when he was 8 years old. You can support the reconstruction by sponsoring one of T44’s bones. And the goal is to put up the finished skeleton at the center. Note to self: come back for that. 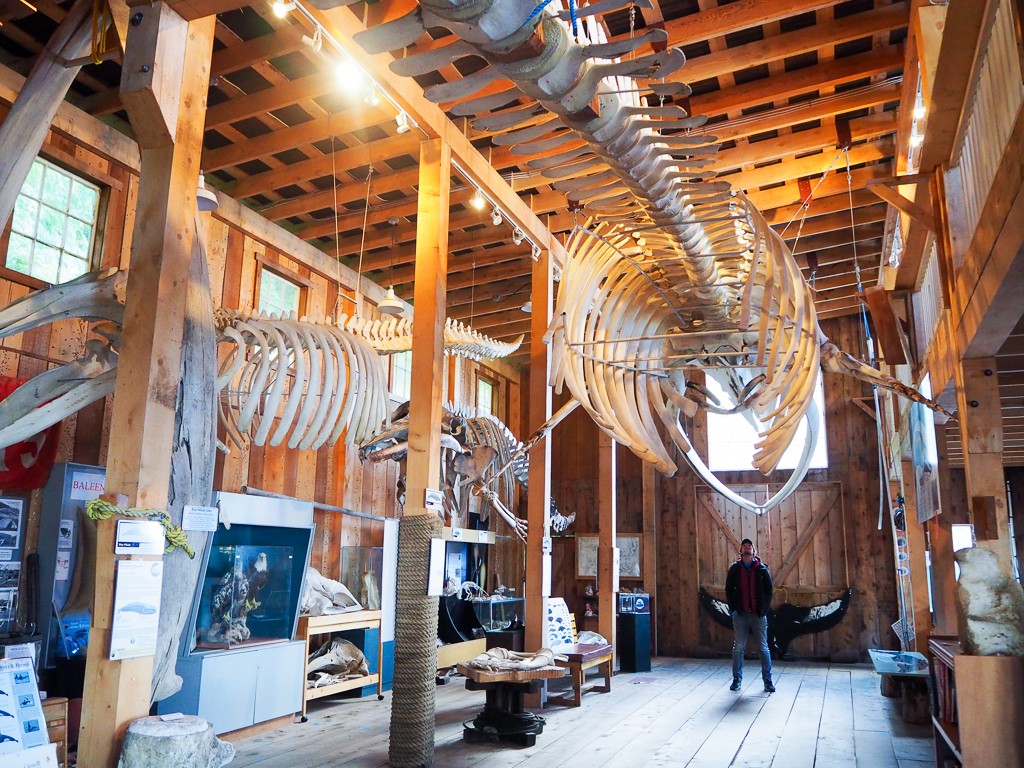 Telegraph Cove is also a great spot for sea kayaking (if you’re up for sharing the sea with killer whales!). And there’s also a nice short hiking trail called the Blinkhorn Trail. There aren’t that many eating out options in this tiny community, but you can grab some great food at the Seahorse Cafe or the Killer Whale Cafe. We loved having dinner at the Seahorse Cafe’s terrace while looking out on the many fishing boats returning to the Telegraph Cove harbor. And seriously, how freaking amazing is this sunset?! 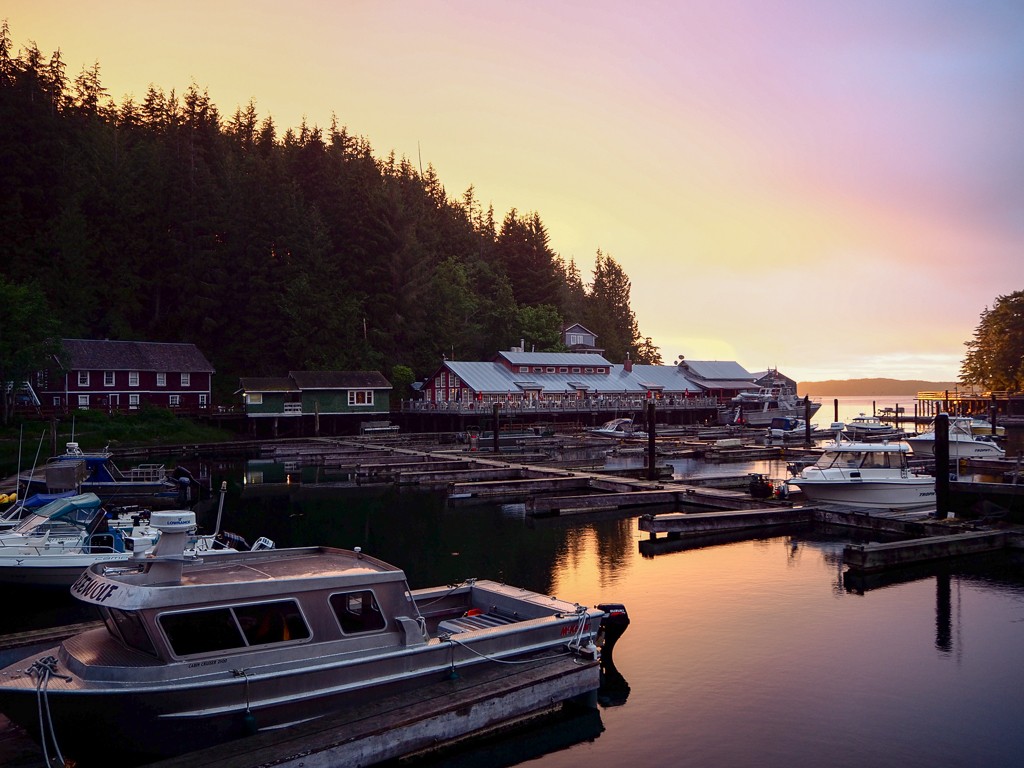 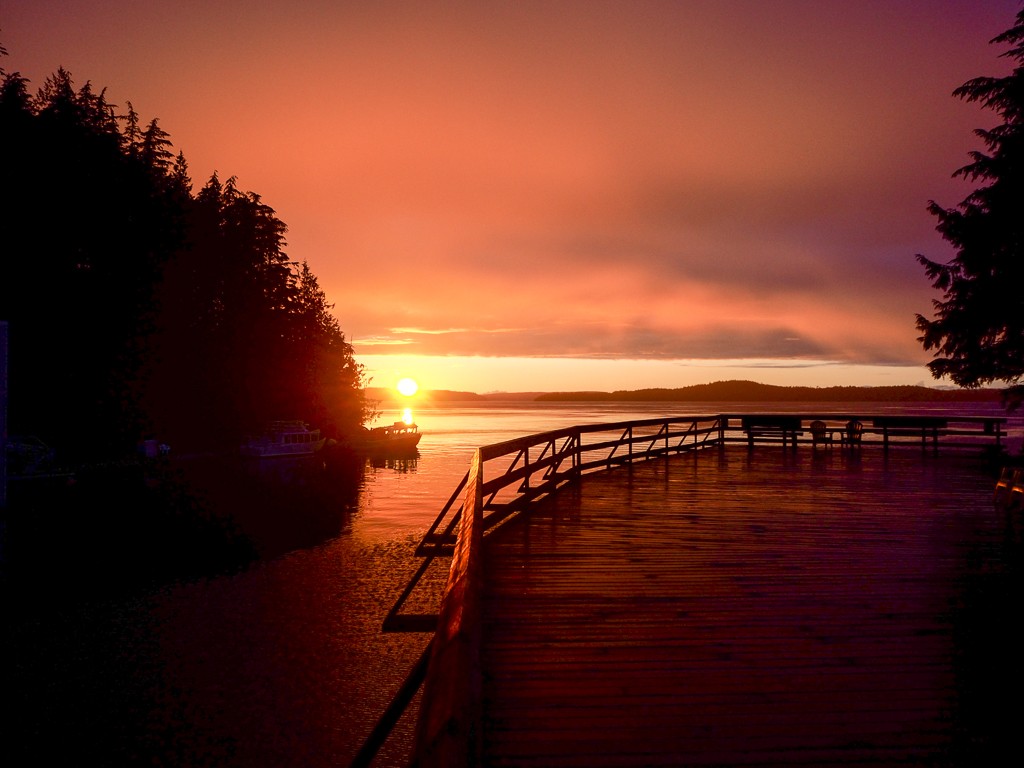 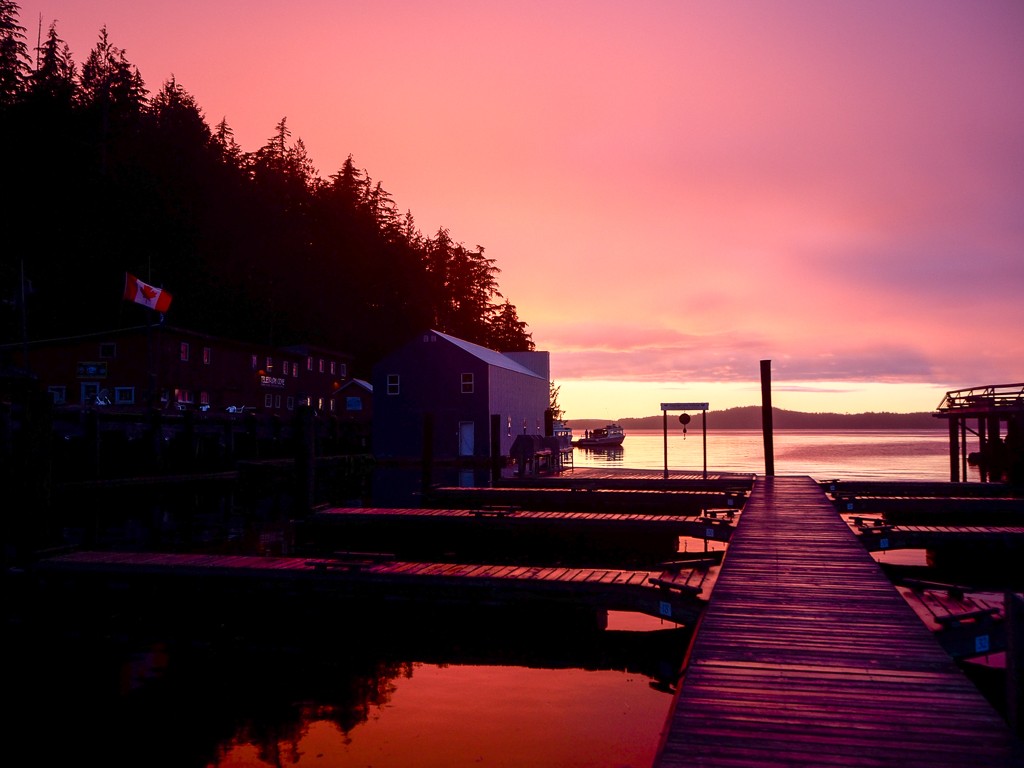 After a few days kicking it back off the grid it was time to get back on the road to catch a ferry to the mainland. The Rocky Mountains were calling… So stay tuned!

In case you missed the previous posts about our Canada road trip, you can catch up here: Vancouver Island’s vibrant capital Victoria, and our amazing grizzly bears experience. And also, don’t forget to watch our fun Canada travel video!