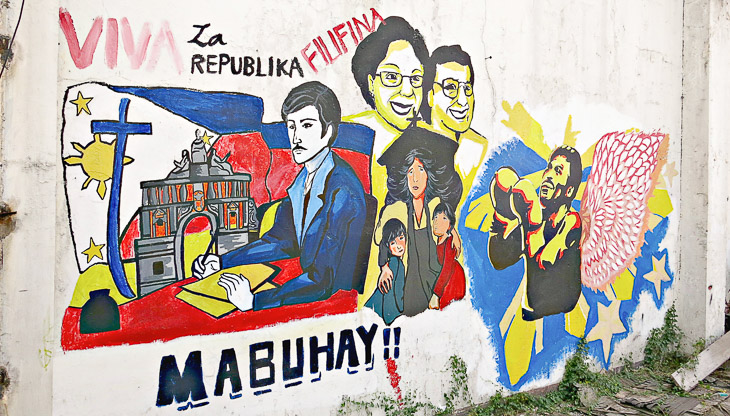 Apparently, Manila was known as the “The Pearl of the Orient” when it was under Spanish rule, roughly between 1580 and 1890. Spoiler alert: it’s not anymore. I don’t mean to be harsh because I can imagine it was once a beautiful city with a perfect location east of Manila Bay, but if you’re flying out to Manila and expect to find a pearl, it’s a bit of a let-down when you learn that the shiny gem is in fact just a rough rock.

In 1863 Old Manila was struck by an earthquake which left the city in complete chaos and ruins. After a period of rebuilding the city was hit hard yet again, in world war II, when the Japanese bombed the city almost completely to the ground. So it’s no wonder that Manila isn’t the prettiest of cities these days. But of course, as is the case with many new places, there’s more than meets the eye. The joy of finding something amazing in the middle of ugliness is always one of my favourite moments when I’m off exploring. So here’s how I tried to uncover Old Manila’s rough exterior in order to find some evidence of it’s old grandeur: welcome to Intramuros!

The best place to find some evidence of Manila’s thriving past is the oldest neighbourhood in the city, called Intramuros. Yes, that means between the walls so I guess it’s not a shocker that the Intramuros district is secluded from the rest of manic Manila by a beautiful city wall. 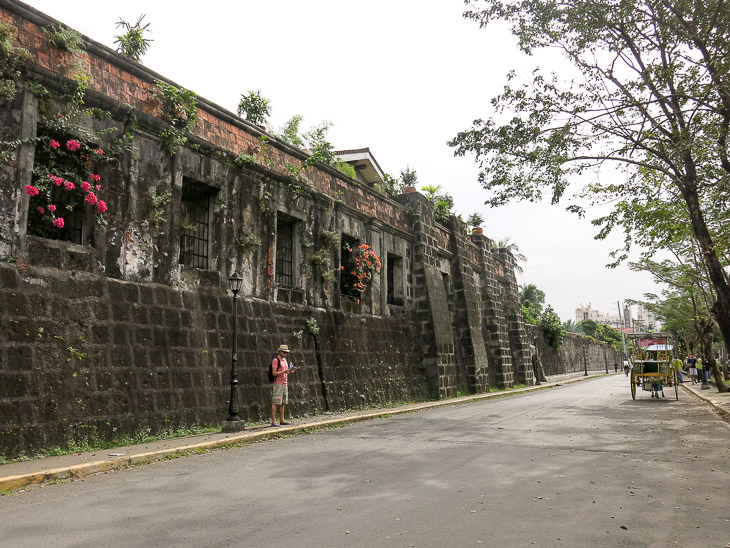 During the Spanish period, Intramuros was the seat of the government and therefore it has a very strong colonial vibe. Even though this part of town has survived Manila’s catastrophic past, it is still pretty much left in ruins. The neighbourhood is home to some of Manila’s poorest and in the small streets you’ll find Filipino family’s trying to get by. 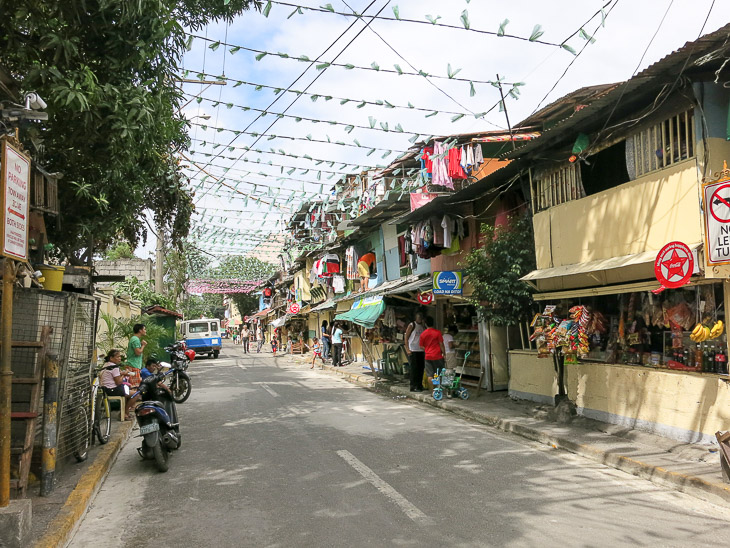 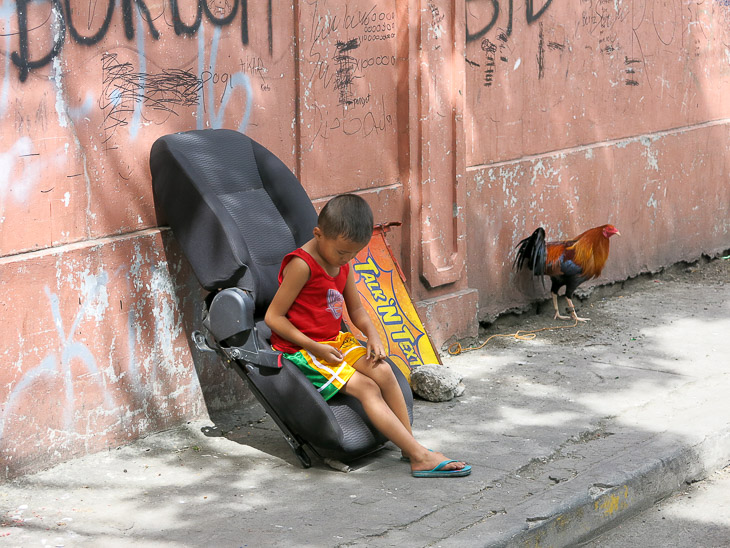 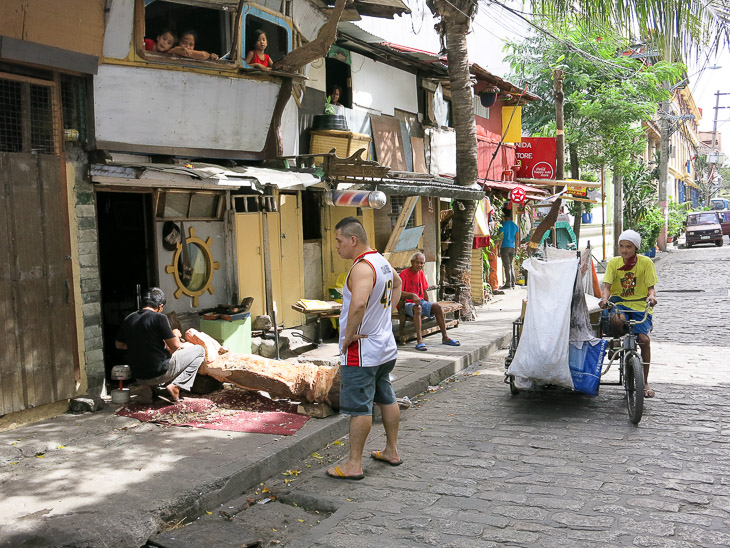 The best way to discover Intramuros is on foot. It is an area that is easy to cross on your own especially when you pick up a map at the Casa Manila in the heart of Intramuros. I like to stroll around a new place and get lost, but if that’s not your thing you can book a walking tour with Old Manila Walks and let someone else do all the navigating for you. 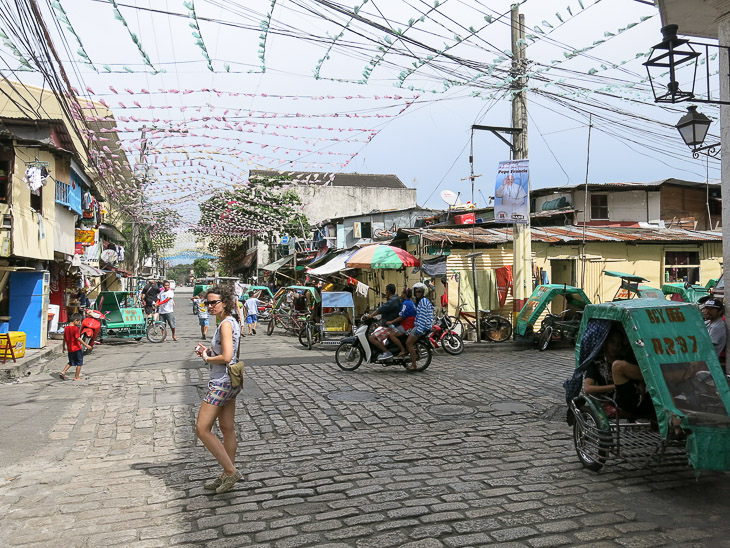 If you don’t feel like walking you can pedal your way around with a guide like Bambike, who have these cool handmade bamboo bikes – hence the name. Unfortunately, due to the Pope’s visit to Manila when we were in town all tours were cancelled. Alternatively, you can just arrange one of the many tricycle drivers around Old Manila to give you a tour. 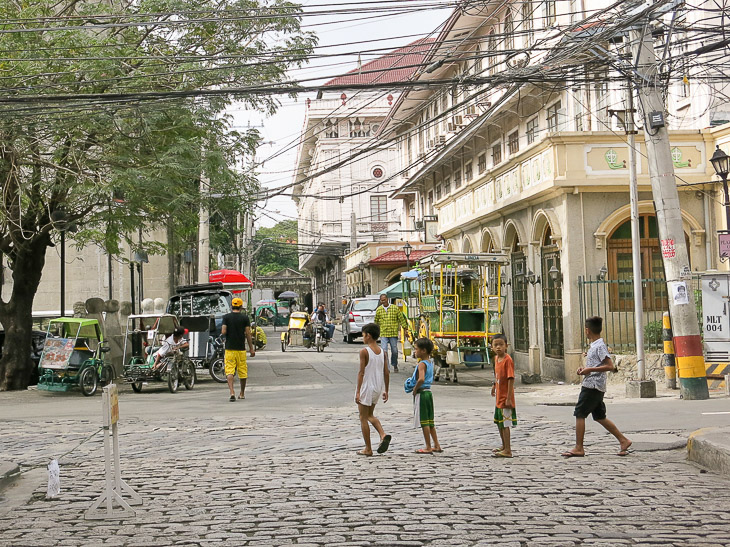 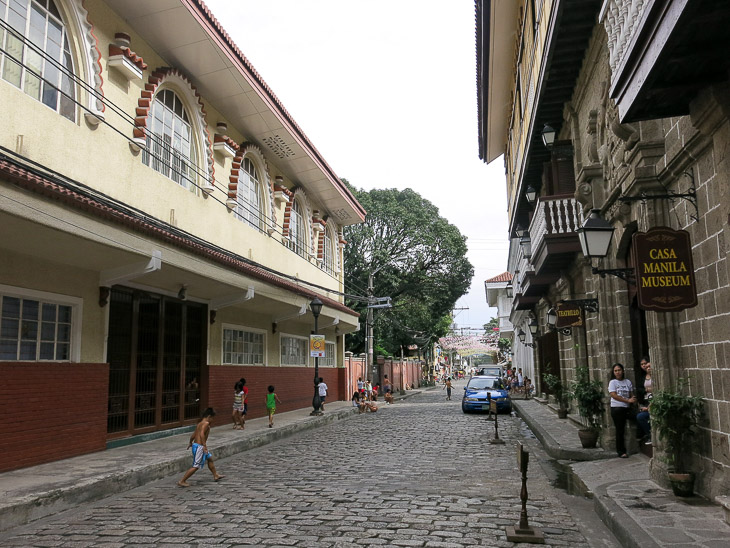 You can walk on the old city wall which gives you a nice view from the top. Follow the wall as a point of reference while you make your way around the hood. There are multiple exit/entry points so you can go down when you spot something interesting that requires further attention. 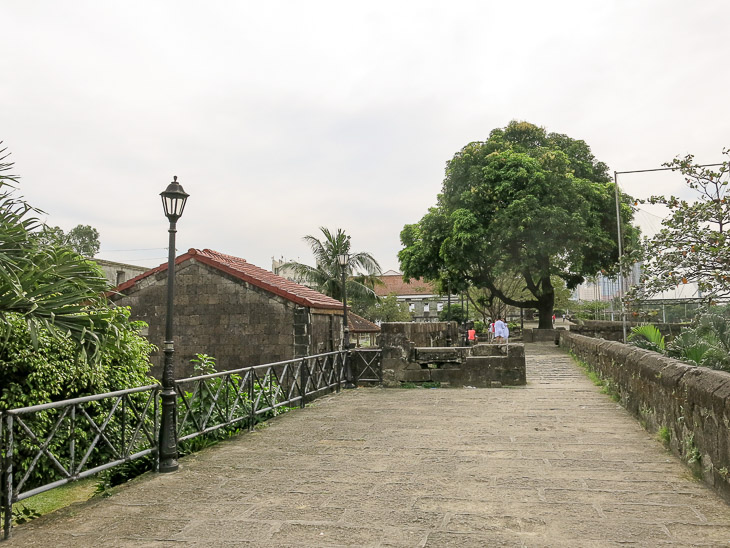 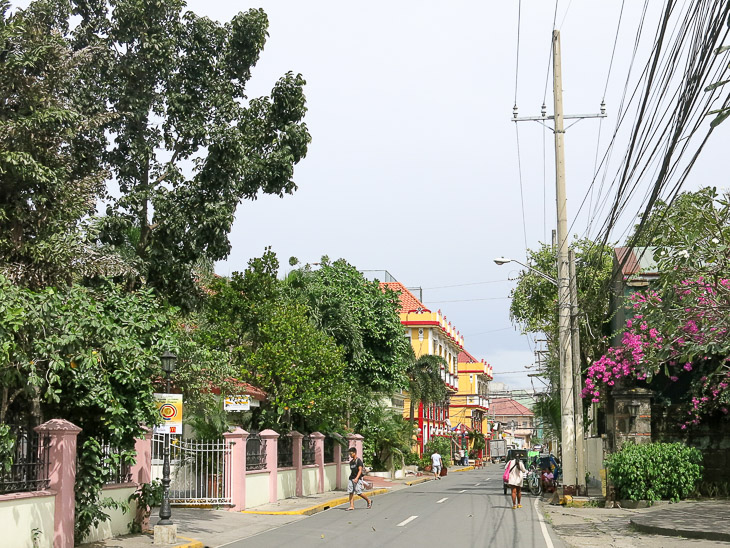 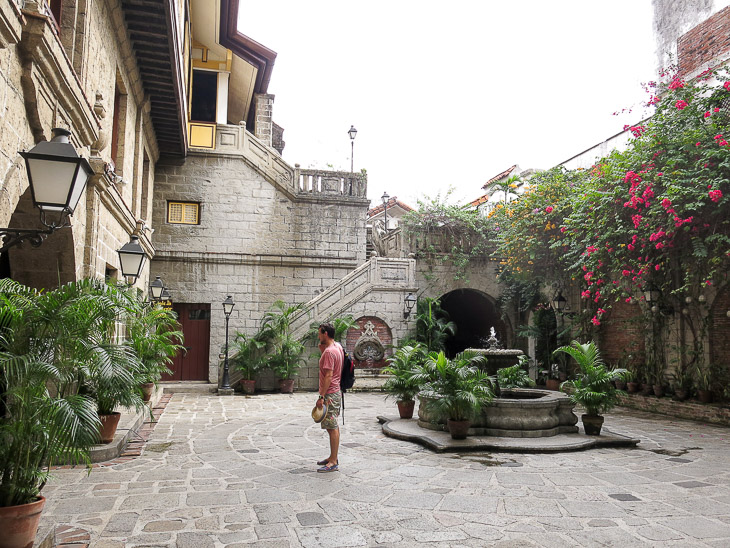 Definitely take your time at Fort Santiago, although it looks like a ruin it is still very impressive. It used to be the military defence fortress, built by Spanish conquistador Miguel Legazpi in 1590, and it lies directly at Manila Bay. You can wander around the abandoned buildings which are among the oldest still remaining buildings in Old Manila. 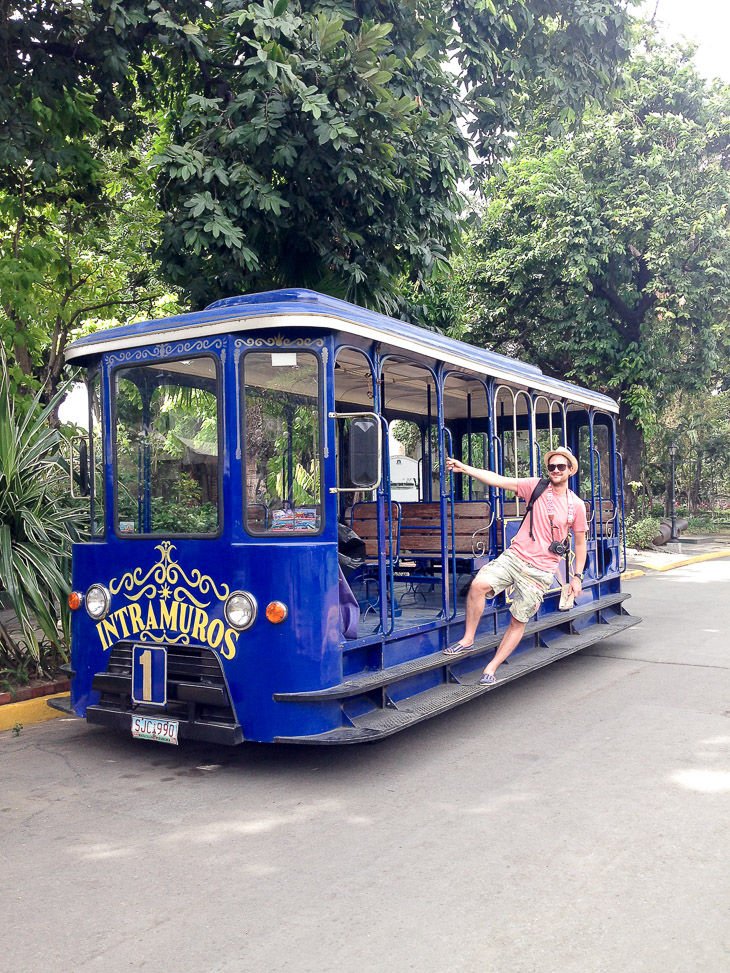 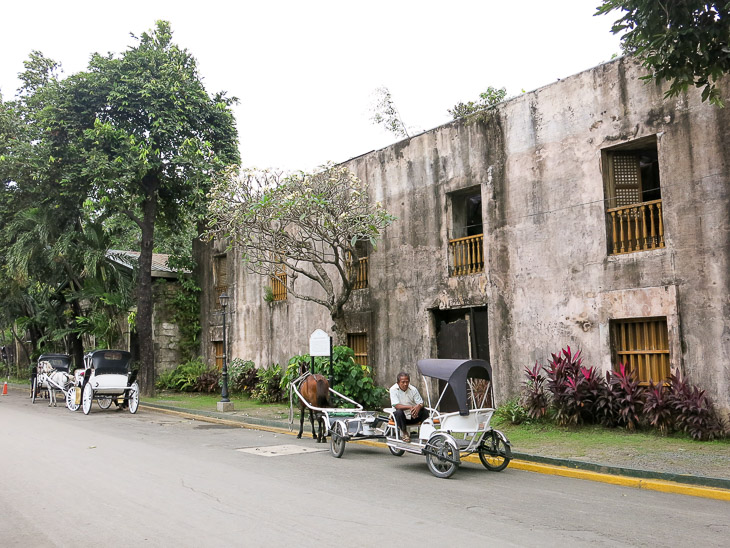 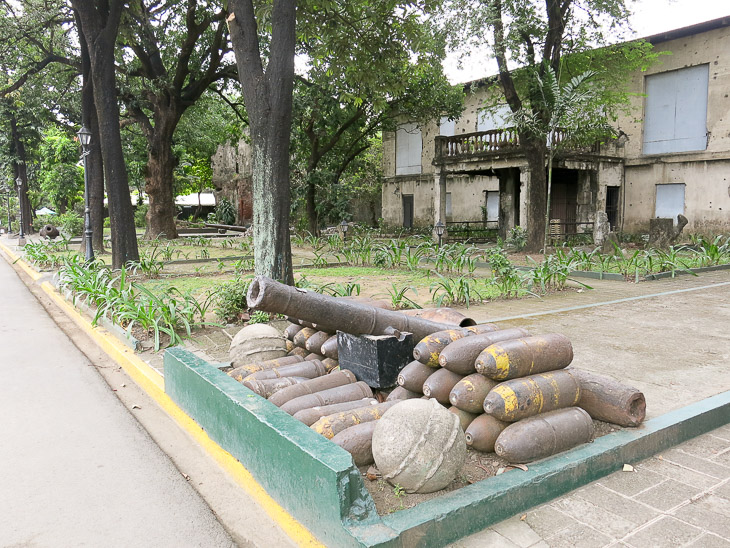 I highly recommend the José Rizal Museum to give you an insight on the country’s national hero who was sentenced and shot to death here by the Spanish rulers in 1896. There are bronze footsteps along the grounds of Fort Santiago to mark the path Rizal walked from his prison cell to his final resting place. 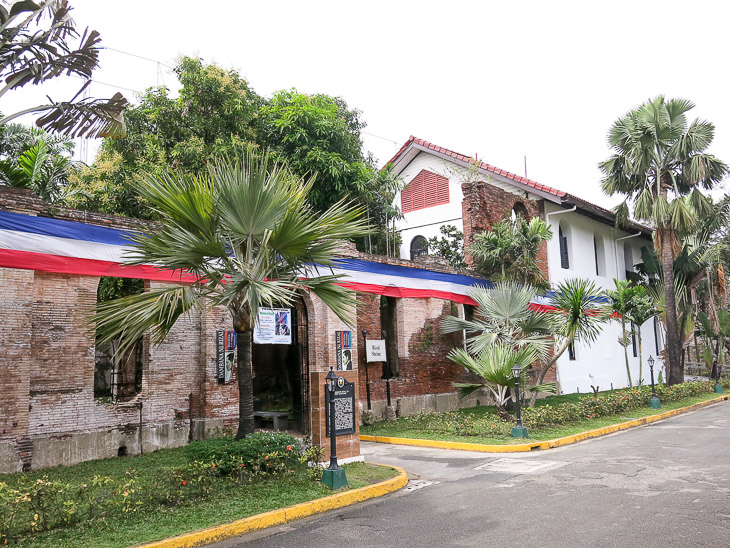 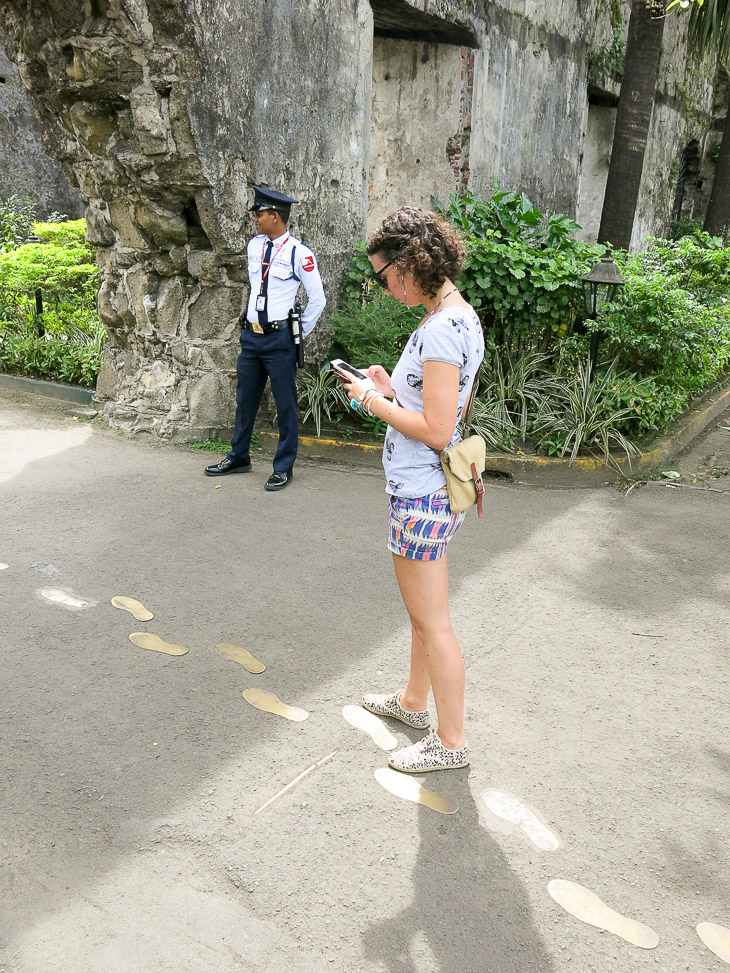 Not far from Fort Santiago you’ll find Manila Metropolitan Cathedral-Basilica, or Manila Cathedral. It’s a very impressive structure, especially when you learn that this is cathedral building number eight (!). Originally built in 1581, Manila Cathedral has been struck by disaster over and over again: a fire in 1583, a typhoon in 1588, over eight earthquakes between 1599 and 1880, and of course world war II. No wonder that Pope Francis did the first mass of his papal visit to The Philippines at Manila Cathedral – a day before we were there. The cathedral could use some extra blessings, I guess. 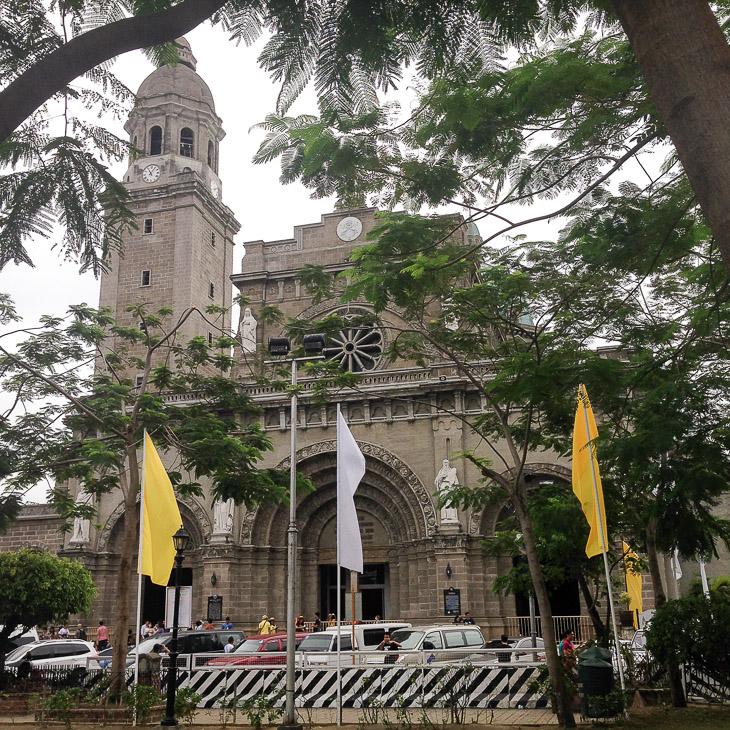 If all of this exploring has made you hungry go for lunch at The Bayleaf Hotel at the Eastern end of Intramuros. It is a very nice place to sit back and take it all in, especially if you go all the way up to the rooftop deck from where you’ll have amazing views over the city. 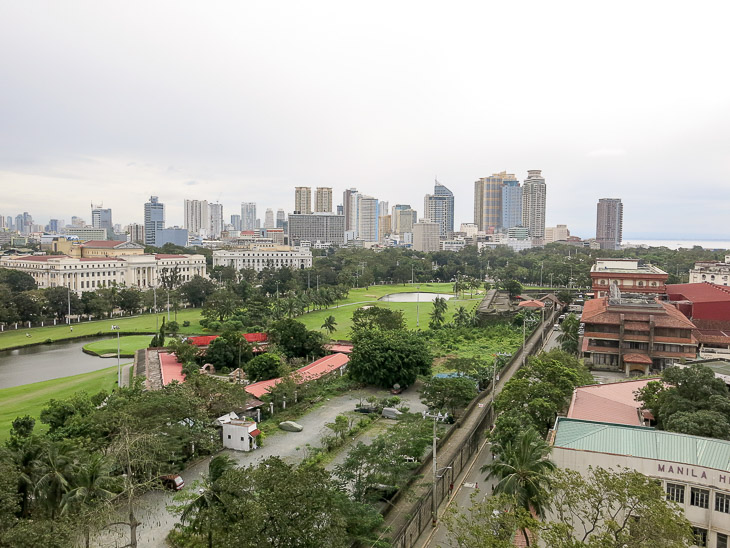 Most visitors to Manila are only there for a night since this is just the start of their Philippines adventure. We thought we’d give the city a bit more time to woo us and chose to stay three nights in total. I’d say: that’s too long. Or too short. The thing is, if you’re only in town for a short period like us, it’s difficult to get a sense of the entire city. So you either stay a week minimum in order to really get to know the city, or you just stay for one night and only explore Intramuros. The rest is just mainly shopping malls – so many, many shopping malls. It is crazy.

We stayed one night at the Sofitel Plaza Hotel near Manila Bay, and two nights at The Peninsula in Makati, Manila’s business district. Both are exceptionally good hotel groups of course, but I highly recommend the Sofitel. First of all for the BEST BREAKFAST EVER. Seriously, the breakfast was just total madness. We’ve stayed in (luxury) hotels all over the world but this was just out of this world. So many choices, I think every kitchen of every corner of the earth was available here. I still dream of that massive cheese walk-in fridge-room… I tried to make a video of all the offerings, and it was over 3 minutes long. That’s right. Check out this post on the Our Awesome Planet blog, entirely dedicated to this breakfast :).

If you’re not a breakfast person (WHAT?!) you’ll wanna stay here for the gorgeous garden with amazing swimming pool surrounding the hotel, right on the shore of Manila Bay – hence amazing sunsets. There is also a very decent gym with great views over the Bay to kick your jetlag in the butt. It’s very close to Old Manila and the SM Mall of Asia if that’s your thing (the 10th largest shopping mall in the world). The Peninsula was a nice experience to check of my must visit hotels list but for me it was just a tad too much and if you’re not in Manila for business I wouldn’t recommend staying in Makati anyway. 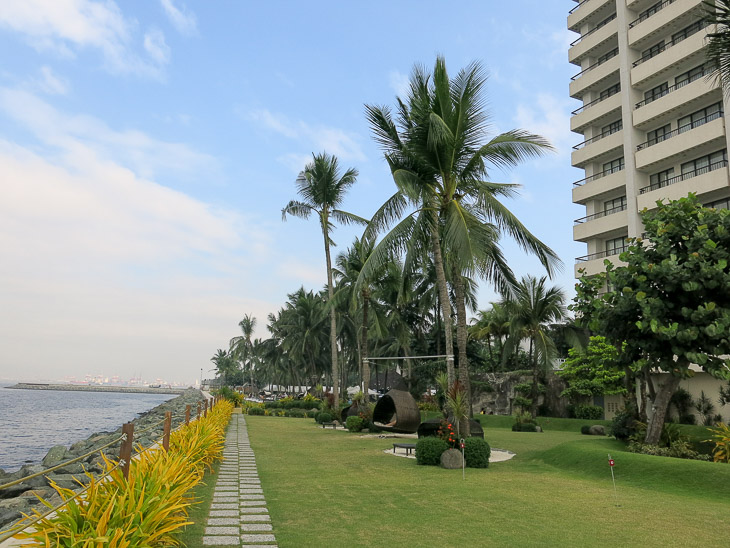 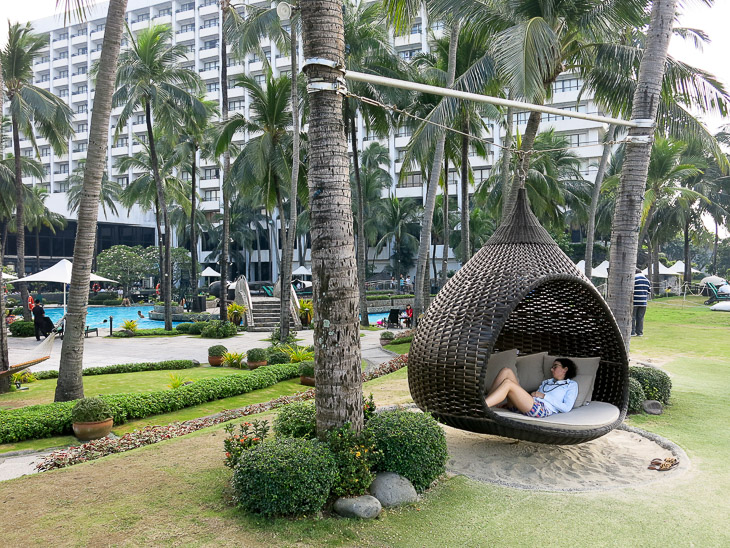 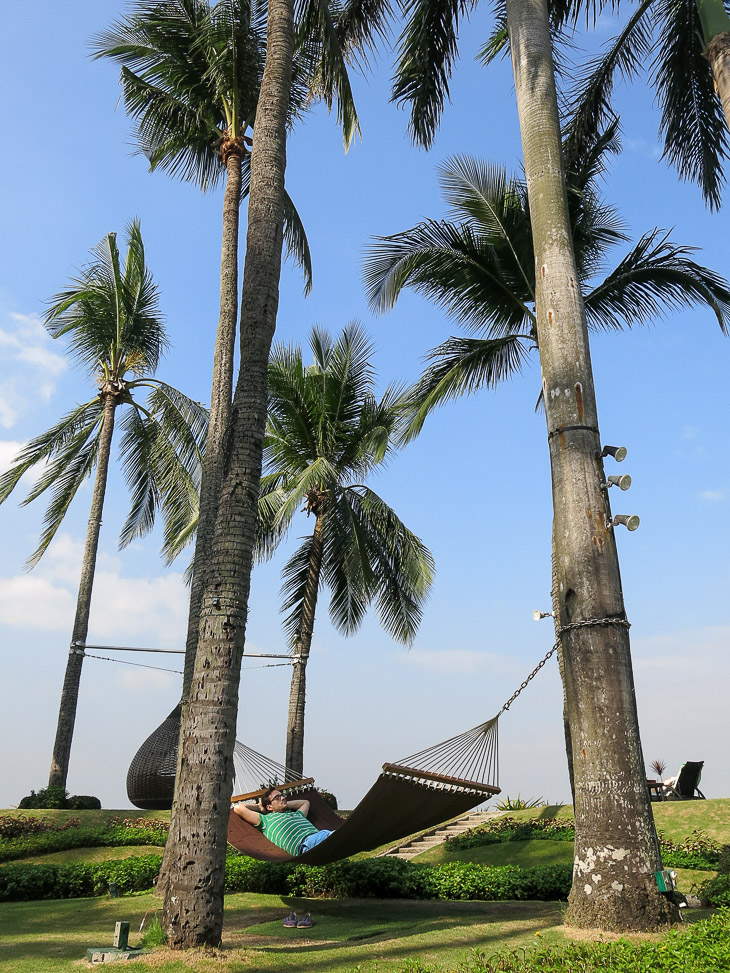 Next time we’re going back to The Philippines I think we just stick to one night at the Sofitel Plaza (yes, for the breakfast) and then fly out to whichever gorgeous paradise island we’re off to. But, I’m willing to change my mind so please let me know if you have any tips for Manila: the sequel. I recently learned that Manila supposedly has a very cool upcoming food scene, so that might be a good reason to go back. So let’s just keep it a tie for now :). 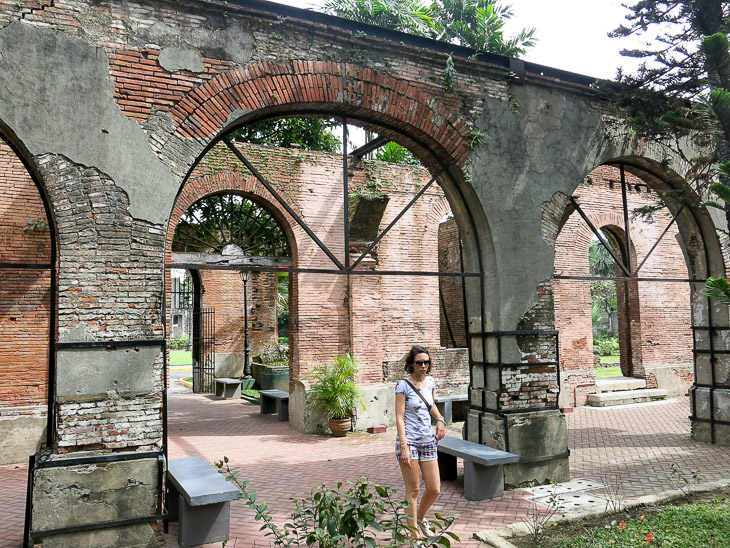